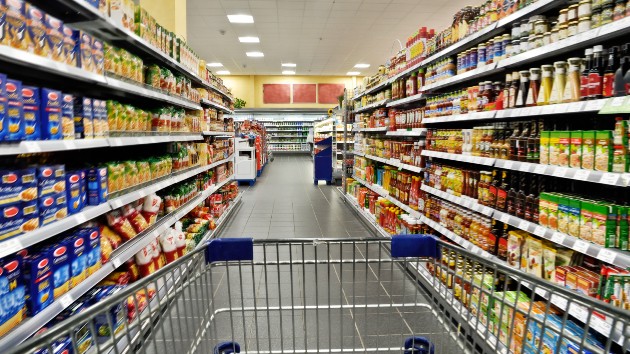 (NEW YORK) — If you have a hunch that some ice cream containers and other goods lining grocery store shelves and your pantry are getting smaller but not cheaper, it may not be all in your head.

“‘Shrinkflation’ is a term used to describe implicitly increasing the price of an item by slightly decreasing the amount or quantity in a package,” Steve Reed, an economist at the Bureau of Labor Statistics, told ABC News via email.

Reed said the BLS doesn’t have any evidence on why this occurs and cannot speak to the motivation or strategies of the sellers, but that “the conventional explanation would be that consumers may not notice small decreases in size or quantity, or react less negatively to them compared to an explicitly higher price.”

Reed said the BLS attempts to compute for “shrinkflation” in its Consumer Price Index, which measures what consumers pay for everyday goods and services and is often looked at as an inflation barometer, by accounting for size and quantity changes as much as possible when collecting data on prices.

The latest data from the Consumer Price Index indicates that prices on everyday goods have jumped 5% over the last 12 months — the largest one-year increase since August 2008. The CPI has been trending upwards every month this year, stoking inflation fears among economists and “shrinkflation” worries among shoppers.

As businesses are raising prices at the fastest pace in years, some consumer advocates warn now is the time to be on the lookout for the often-less-visible downsizing.

“Basically, if a manufacturer is thinking of raising prices, you can do it in one of several ways,” Edgar Dworsky, a longtime consumer advocacy lawyer and former Massachusetts Assistant Attorney General, told ABC News. “The typical way is, well, to raise the price of the item. The sneakier way is to keep the product package looking about the same, but put less in the container.”

“So you’re basically having the consumer pay the same price but getting less for their money,” Dworsky said.

Moreover, he noted that downsizing often leads to fewer complaints over “sticker shock.”

Dworsky, who also worked as a consumer education consultant for the Federal Trade Commission, has been documenting instances of downsizing for years on his “public service” websites ConsumerWorld.org and MousePrint.org.

Some notorious examples of shrinkflation he’s documented over the years include the diminishing size of ice cream containers from a number of name brands. The once-standard half-gallon (64-ounce) container shrunk to 56 ounces and then to 48 ounces — the latter a 25% decrease in the total amount of ice cream. Another sector where shrinkflation can be seen is in paper towel and toilet paper products, which, according to Dworsky’s data, have decreased over the years by up to 90% from some brands that have slowly slashed the number of sheets per standard roll.

Further examples of the phenomenon can be seen on the Reddit forum r/shrinkflation — an online community with nearly 8,000 members that features hundreds of photos depicting downsized products beside their originals. Some major culprits include candy bars, condiments and hot dogs.

While downsizing has been going on for “decades and decades,” Dworsky said it often comes in waves and is typically triggered by manufacturers saying they’re experiencing an increase in raw material costs — which many firms are currently reporting amid global supply chain bottlenecks.

How to avoid being duped

There are things consumers can do to avoid these sneaky price hikes, Dworsky said, such as thinking about prices by weight and doing a few simple calculations.

“Consumers are price conscious — they’ll spot that price increase — but they’re not net-weight conscious,” he said. “If you ask someone how many ounces is in this jar of mayonnaise, or in the cereal box you buy, they’re going to shrug their shoulders.”

“That’s kind of how manufacturers take advantage, because you don’t have those sizes memorized,” he added. “So what consumers can do is they have to become net-weight conscious.”

He recommends memorizing the net weight of items that you buy all the time to keep an eye on if its changed, noting that most products won’t advertise that they are being sold in smaller portions.

Dworsky also recommends looking at competing brands for comparison, and then at store brands, which he says “tend to be the last to downsize the unit price.” Finally, Dworsky called family-size unit pricing the “great equalizer,” because it often tells you what the cost is per ounce or per 100 sheets and makes for much easier comparisons.