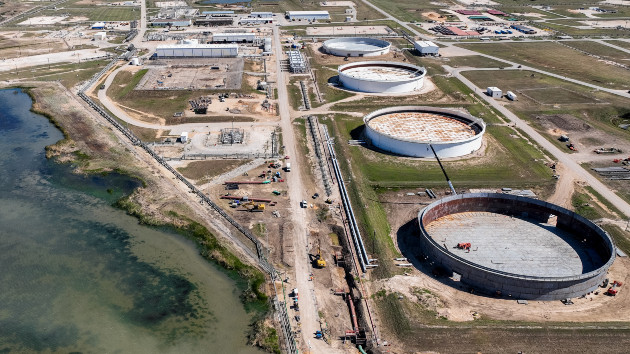 (NEW YORK) — As rising gas prices strain the budgets of many Americans, President Joe Biden announced on Wednesday moves that aim to address the oil supply shortage behind the cost spike.

Most notably, the announcement includes the release of 15 million barrels of oil from the nation’s stockpile — known as the Strategic Petroleum Reserve — in December.

The release accounts for the final 15 million barrels of oil from the 180 million that Biden vowed to release over six months.

The move renews questions about why the U.S. stockpiles oil, how much oil the reserve has left and if more oil on the market can bring down gas prices.

Here’s everything you need to know about the SPR:

What is the U.S. Strategic Petroleum Reserve?

Established after the Arab Oil Embargo triggered an energy crisis in the early 1970s, the SPR provides an emergency source of oil that protects the U.S. against a sudden supply crunch.

The reserve, which can reach as many as 714 million barrels, is stored in large, high-security underground salt caverns along the gulf coastlines of Louisiana and Texas. As of Oct. 7, the reserve stood at 408 million barrels or 57% of overall capacity, according to the Energy Information Administration.

The president retains wide discretion to release oil from the reserve in what he deems an emergency. In such cases, the U.S. sells the oil on the open market, which in theory should bring oil prices down by increasing supply.

How often has the U.S. released oil from the reserve?

Before the Biden administration, the U.S. released oil from the reserve under emergency conditions three times since it was founded in 1975.

Most recently, in 2011, then-President Barack Obama ordered the release of 30 million barrels alongside additional commitments from allies amid supply disruptions in Libya and elsewhere.

The U.S. released oil reserves in 2005 following the devastation of oil refineries wrought by Hurricane Katrina. Plus, in 1991, the U.S. released oil from the reserve at the beginning of the Gulf War in an effort to assuage concern over oil supply shock from the onset of the conflict.

How much oil has Biden released from the reserve and why?

In March, the Biden administration announced a commitment to release about 1 million barrels per day from the reserve over the ensuing six months — a move that aimed to alleviate some of the oil supply shortage caused by the Russia-Ukraine war as well as supply chain bottlenecks.

The total release of oil from the Biden administration will reach 180 million barrels by December.

For context, the U.S. consumed about 20 million barrels per day last year, EIA data showed. In other words, the amount released by the Biden administration equates to roughly nine days worth of U.S. oil consumption.

Has oil released from the reserve brought down gas prices?

Analysts say recent releases from the oil reserve have reduced gas prices. But other factors have also contributed to the decline in gas prices from a peak in June, including a drop-off in demand after a summer travel surge.

A report from the Treasury Department in June found that releases from the strategic reserve had accounted for a reduction in gas prices of $0.33 per gallon.

Releases from the strategic petroleum reserve have “reduced oil prices by an estimated close to $10 per barrel, which translates into a saving of about 40 cents per gallon,” Zandi told ABC News.