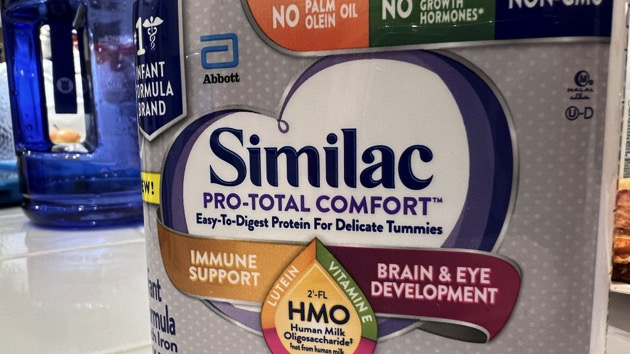 (NEW YORK) — The head of one of the country’s largest manufacturers of baby formula expressed remorse at his company’s role in the nationwide shortage — and announced a multimillion-dollar fund to help families that have suffered during the crisis — in an op-ed published over the weekend.

“The past few months have distressed us as they have you, and so I want to say: We’re sorry to every family we’ve let down since our voluntary recall exacerbated our nation’s baby formula shortage,” Abbott CEO Robert Ford wrote in an op-ed in the Washington Post. “I have high expectations of this company, and we fell short of them.”

Ford reiterated a two-week timeline for when Abbott’s shuttered Sturgis plant will reopen — saying he expects the company will be able to restart the facility “by the first week in June.”

Once that facility is back at full capacity, Ford said that Abbott plans to “more than double” its current domestic production.

“By the end of June, we will be supplying more formula to Americans than we were in January before the recall,” Ford wrote, adding that Abbott will be “making significant investments to ensure this never happens again.”

Once the plant restarts production, it will take six to eight weeks before product is available on shelves, according to Ford.

Abbott’s specialized formula, EleCare, was included in its recall, leaving families with limited nutrition options particularly scrambling to find formula. There have been reports of several children hospitalized due to the lack of EleCare.

In his op-ed, Ford said the company will “invest in upgrading our safety and quality processes and equipment” and “create the redundancy we need to never have to stop production of critical products” like the specialized formulas for children who can’t digest other formulas and milks.

Ford called the hospitalizations due to a lack of EleCare “tragic and heartbreaking” and added that Abbott is “working to identify ways” to get sick kids across the country what they need.

Once manufacturing resumes, Abbott will “prioritize EleCare … and get that out the door first,” Ford wrote.

As the company further works to help ease the shortage, Abbott’s Ohio plant’s lines have also been converted from adult nutrition products to make more ready-to-feed infant formula, and the company is airfreighting in more powdered formula from its Ireland facility, Ford noted.

While families wait for formula to hit shelves, Ford announced in his op-ed that Abbott is establishing a $5 million fund “to help these families with medical and living expenses as they weather this storm.”

“These steps we’re taking won’t end the struggles of families today,” Ford wrote. “Some solutions will take weeks, others will take longer, but we will not rest until it is done. I will not rest. I want everyone to trust us to do what is right, and I know that must be earned back.”

In response to the crisis, this week President Joe Biden invoked the Defense Production Act to get ingredients to manufacturers to help speed up production. He also directed Department of Defense commercial aircraft to pick up infant formula overseas to get on U.S. shelves faster while U.S. manufacturers ramp up production.

The first batch of imported baby formula arrived Sunday in the United States.