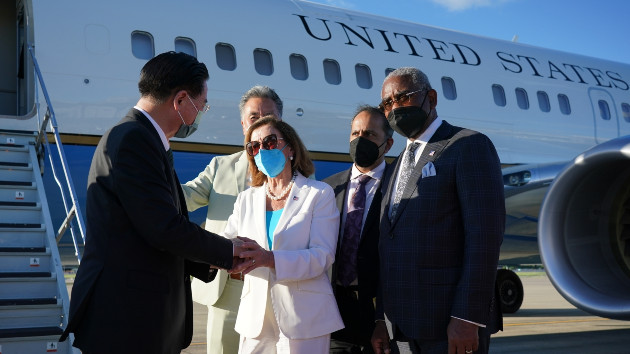 (WASHINGTON) — When Speaker of the House Nancy Pelosi arrived in Taiwan last week, the world braced for China’s response. Within hours of her departure, China began military exercises around Taiwan, leaving the world wondering how far China is willing to take its response.

Evidence suggests China will not stop at military drills.

“The last time we [saw] a crisis like this was in 1996,” Kai Hao Yang, assistant professor of economics at Yale School of Management, told ABC News. “At that time [the] computer chips market was not dominated by Taiwan manufacturers yet, plus the market was a lot smaller than it is right now.”

So how would U.S. consumers be impacted? First, China could hamstring Taiwan’s ability to export products. Taiwan is one of the United States’ top 10 trade partners. In addition to vehicles and machinery — important Taiwanese imports — the island is also home to TSMC, the largest manufacturer of computer processor chips in the world.

“Some people talk about China blockading Taiwan’s ports so Taiwan’s chips can’t go out,” Ming-Jen Lin, professor of economics at National Taiwan University, said in an email to ABC News. “If this really happens, it’s another story. But I think we are far from there.”

If China took this action, it could force U.S. tech companies to use chips manufactured in the U.S., which would increase prices for consumers.

“The unit cost of producing a chip is 50% higher in the U.S. than in Taiwan,” Lin said.

The second way China’s retaliation threatens the American consumer is if Beijing chooses to impose economic penalties on U.S. trade. These actions could mean rising prices for American consumers and more supply-chain headaches.

“I think there’ll be short-term disruption,” Baucus told ABC News, “but I don’t think long term because business is so important to both countries.”

China is at a crossroads with where to go next. A war would be catastrophic and business sanctions are less than ideal.

“China worships at the altar of stability,” Baucus said. “And they want to keep the country’s economy stable. And that means business.”

For many decades, American consumers have valued China’s ability to produce inexpensive goods. Those days, however, could be numbered.

“The cheap price era of the past 20 years is definitely over,” Lin pointed out. “I am not saying it will happen overnight, but definitely gradually.”

For now, American consumers have more to be worried about, like 40-year-high inflation and a possible recession. But economic uncertainty lies ahead as China and U.S. communication finds itself at a standstill.

US rent prices finally showing signs of cooling down