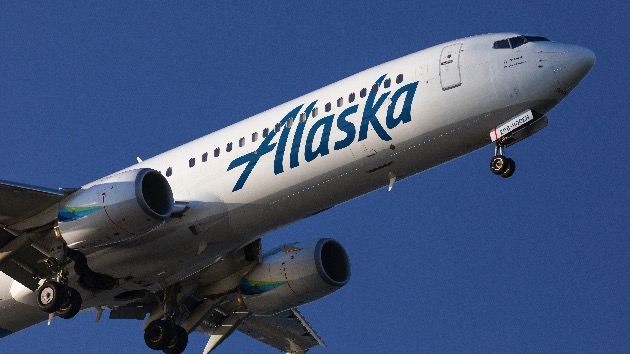 (LOS ANGELES) — When passengers board an Alaska Airlines flight, most don’t know it but that plane is lighter than other Boeing 737s or Airbus A320s, according to the airline.

That’s because during the COVID-19 pandemic, the airline used the slowdown in travel to develop, test and introduce new products to replace plastics on board.

Gone are plastic water bottles and plastic cups. Lighter alternatives are being used. Food containers have been redesigned. It not only allows the airline to cut the use of plastics, which can take over 400 years to decompose in the environment, but the airline says less weight onboard means it is burning less fuel, saving money and reducing carbon output.

Onboard efforts like those at the airlines combined with attempts from plane maker Boeing are leading to a seismic shift in the airline industry. It wasn’t that long ago that the smell of jet fuel was just a normal part of the airport experience. Between utilizing sustainable fuels, electric and hydrogen airplanes that are in development and reducing overall fuel use, the industry vows it is trying to cut the exhaust that comes out of a plane’s engines and goes into the environment.

ABC News recently got access to a flying laboratory that Boeing calls the ecoDemonstrator. Boeing borrows brand new airliners before they are delivered to a carrier. It strips each plane of its normal interior and sets up a flying testbed with racks of computers, cables and wires running all over, and sensors all around the plane. For at least a few more weeks, the current ecoDemonstrator is on board a new Boeing 737-Max that will soon have the regular interior installed and will be delivered to the airline that ordered it. But for now, engineers and scientists are able to test all kinds of technology that could soon make flying greener.

“The ecoDemonstrator program has been around for about a decade,” program manager Rae Lutters explained to ABC News while on board the aircraft. “We take innovative technologies out of the lab, put them on an airplane and fly them around to really help explore our learning and understanding of sustainable technologies.”

The special wingtips now seen on Boeing aircraft, called split scimitar winglets — those V-shaped ends of wings on newer planes — are a direct result of an idea that was tested on a previous ecoDemonstrator and showed to save fuel and improve performance. The winglets are now part of planes flying all over the world.

On the current ecoDemonstrator, Boeing’s teams are testing items like wall panels made out of excess carbon fiber from the Boeing 777, which they hope will be lighter and quieter. They are also testing new lower profile warning lights that will cause less drag on the plane and, in return, burn less fuel. And they are working on new touchscreens in the cockpit and air sensor equipment to test the air quality at airports globally when a plane lands.

The current ecoDemonstrator has been flying all over the world with sensors and computers analyzing all of the experiments on board to determine if they will help make the aircraft greener.

“We’re trying to get the airplane to operate as efficiently as possible,” said Lutters.

Getting rid of plastics onboard

Down the road from Boeing Field in its new high-tech headquarters overlooking Seattle-Tacoma International Airport, Alaska Airlines is also trying new ideas to cut down on weight and fuel burn. By ditching plastic water bottles and cups in November, the airline said it will save 18 Boeing 737 worth of weight every year. It’s a feat no other large airline in the U.S. has accomplished. Alaska is the first airline to team up with premium brand Boxed Water to serve water from milk carton-like containers rather than plastic bottles.

“The biggest issue we were having was single-use plastic,” Alaska Airlines manager of guest products Todd Traynor-Corey said. “Even if you have the best recycling program possible, a percentage of that plastic is going to end up in the landfills and even into the ocean. Being based on the West Coast, ocean life and sustainability are really important to us.”

During the pandemic, the airline carried out a long process of recruiting alternatives to plastic bottles. They did taste tests and asked for feedback from staff and passengers. Eventually, they settled on Boxed Water.

“This is a very visible change. It’s not a free change. There’s a cost that comes with it. We are a premium water that’s out in the industry and Alaska saw that we are doing better. Our lifecycle analysis shows that. Super big kudos to Alaska for stepping up and making the change away from plastic and to cartons,” said Boxed Water founder and CEO Daryn Kuipers.

The iconic plastic cup that used to sit on passengers’ tray tables is now gone from Alaska Airlines. It has been quite a ride trying to find a simple paper cup that fits the needs of the airline as its planes fly around North America.

“We partnered to really find a more sustainable cup and we just sourced a simple paper cup that is meant cold and hot liquids,” Traynor-Corey said, showing the cup.

For months, different paper cups were tested with different liquids. Most passengers would have no idea so much work went into changing to a paper cup. The work is still underway. They have yet to find a biodegradable plastic cup that can hold hard alcohol.

Many alcohols eat through paper, which they found was an issue aboard their planes.

Alaska Airlines’ efforts are not stopping with what flight attendants are serving on board. The airline is now employing an artificial intelligence (A.I.) program called Flyways to suggest routes that can get passengers to their destinations faster, smoother and while burning less fuel.

“Flyways is probably the most exciting thing that I’ve come across in airline technology since I can remember,” said Pasha Saleh, who is head of corporate development at Alaska Airlines.

Saleh is also a pilot for Alaska.

Alaska Airlines has uniquely teamed up with a Silicon Valley startup to develop Flyways using A.I. to better suggest the best way to route aircraft. Airline dispatchers are given suggestions on how and where to fly planes. They can accept or reject what the A.I. is suggesting. As the weeks and months go on using Flyways the platform is getting better at its suggestions due to machine learning in the A.I.

“We found this company called Airspace Intelligence and at the time that we met them it was only two guys. Two guys backed by Google,” explained Saleh. At that time, Airspace Intelligence was developing software to better route vehicles on the ground. There was a realization that technology could work in the air.

By analyzing numerous sources, the platform can predict what the weather, air traffic, and other aspects impacting the flight will be when a plane reaches any area of the country. It might, for instance, choose to delay a flight by two or three minutes knowing that will help avoid a thunderstorm over Oklahoma in three hours or help the flight avoid gridlock in the landing pattern in New York, which would waste time and fuel.

“Flyways will, in many cases, reduce the length of a flight therefore reducing the fuel burn, and reducing the emissions,” said Diana Birkett Rakow, senior vice president of sustainability at Alaska Airlines.

During a six-month pilot program at Alaska Airlines, Flyways shaved off, on average, five minutes from flights and saved 480-thousand gallons of jet fuel.

The airline said Flyways is also quite good at helping flights avoid turbulence by analyzing lots of weather data and providing smoother flights.

“This is what machines are really good at, taking huge data sets and putting them together,” according to Saleh.

The team at Alaska Airlines says the benefits are enormous and they would like other airlines to get onboard with Flyways because it would help make the aviation system safer, faster and more environmentally friendly.

Yet environmental groups are mixed on the efforts.

The Environmental Defense Fund has teamed up with the Rocky Mountain Institute to create the Sustainable Fuels Aviation Buyers Alliance. Some of the world’s largest companies have agreed to join the EDF’s initiative to help make sustainable fuels more available and cost effective for airlines to buy.

Carnahan, who is former U.S. chief negotiator for climate change, said airlines are in a tough position with the cost of sustainable products being so much higher than traditional fuels.

“They compete fiercely with one another and have very slim margins. Sustainable aviation fuel which is really the only option they have to fully decarbonize is anywhere between two and four times the cost of fossil jet fuel,” according to Carnahan.

But at Greenpeace, the organization believes much of what the industry is doing is so-called “greenwashing.” It doesn’t believe such solutions are viable long term and that the changes being made are minor cosmetic measures distracting from a bigger problem of rising emissions in the air travel sector. The group says the aviation industry is a major polluter that needs to be completely revamped by reducing the number of flights to truly become carbon-neutral.

“That’s why Greenpeace is calling for a phase-out of short-haul flights in Europe, when a train or ferry alternative under six hours exists,” said Herwig Schuster, Greenpeace in Europe’s transport campaigner.

The group is calling on governments globally to invest in better rail service.

“Airlines have introduced a number of alleged ‘green’ measures based on excessive optimism on so-called ‘sustainable aviation fuels,’ carbon offsetting and future aircraft designs,” said Schuster. “But these technologies are not the answer to tackling the rising emissions in this sector and will largely not be marketable solutions.”

But the airlines and plane makers say they are investing huge amounts of money to make a true change and that they have to work within the confines of current technology while they plan for the decades ahead.