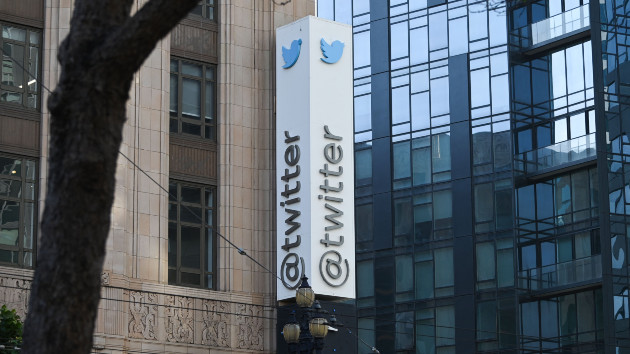 (SAN FRANCISCO) — A number of Twitter employees appear to be on their way out after declining to accept an ultimatum from new company owner Elon Musk asking that they “commit or leave,” three sources told ABC News.

It is not yet known how many Twitter employees accepted Musk’s email request that they commit to being “extremely hardcore” or resign with three months severance, but all three sources told ABC News that dozens of Twitter employees are sending the “salute” emoji over the company’s Slack — presumably signaling their departure from the company.

“I did not accept [Musk’s] ultimatum,” one Twitter employee told ABC News. “Many of us didn’t. … Now we are just waiting for our access to be shut down.”

ABC News confirmed that several of the employees who did not agree to Musk’s request had a key role in targeting and disposing of misinformation and hate speech on Twitter.

Musk sent a companywide ultimatum on Wednesday morning that Twitter employees must commit or resign by Thursday evening, according to an email from Musk obtained by ABC News.

Bearing the subject line “A Fork in the Road,” the email from Musk on Wednesday said: “Going forward, to build a breakthrough Twitter 2.0 and succeed in an increasingly competitive world, we will need to be extremely hardcore. This will mean working long hours at high intensity. Only exceptional performance will constitute a passing grade.”

For those who wished to be part of the “new Twitter,” Musk directed employees to “click yes” on the link in the email.

“Anyone who has not done so by 5pm ET [Thursday] will receive three months of severance,” Musk said. “Whatever decision you make, thank you for your efforts to make Twitter successful.”

Musk, the CEO of Tesla and Space X, earlier this month began layoffs that cut roughly half of Twitter’s 7,500-person workforce.

Those laid off will receive compensation and benefits until the first week of January 2023, though the date may vary for employees. Affected employees were already locked out of their Twitter systems, such as email and Slack.

Musk, who said he overpaid for the platform at the purchasing price of $44 billion, faces pressure to boost the company’s profits. Earlier this month, he said the company was losing $4 million each day.