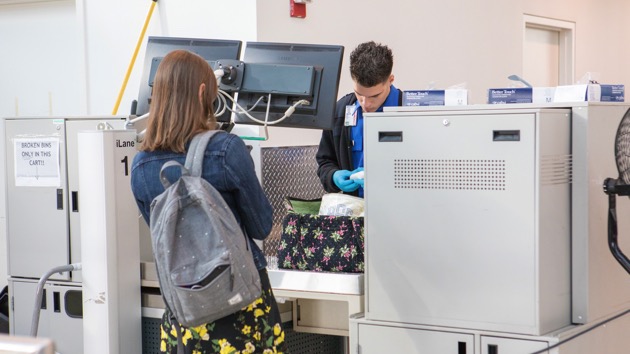 (WASHINGTON) — The Transportation Security Administration (TSA) screened seven times more passengers this past weekend than this time in 2020, Department of Homeland Security Secretary Alejandro Mayorkas said at a press conference on Tuesday.

The increase represents 90% of the volume the TSA, which is overseen by DHS, would log during a typical day in 2019 before the pandemic, Mayorkas said at Reagan National Airport just outside of Washington, D.C.

Masks, however, are still required on all airplanes the secretary said.

“The federal government still requires the traveling public to wear a mask on planes, buses, trains and other forms of public transportation. This is a federal mandate,” the secretary said.

The mask requirement will be dropped “when the science and the data, establishes that that is in the best interest of the American public’s health,” Mayorkas said, adding that DHS is working quickly to eliminate the mandate.

Darby LaJoye, the acting TSA administrator, said that there is a “pent up demand” for travel this summer due to the pandemic, and the agency is expecting high numbers at airports this summer.

“Just as passenger volume is increasing, so are wait times throughout your travel experience,” LaJoye said.

To combat longer wait times, LaJoye said the agency has hired over 3,000 employees since January and plans to hire 1,000 more by July 4.

The acting administrator also warned passengers to remember that firearms are only permitted in checked bags and should be declared with the airline prior to arrival.

He said the TSA has seen an increase in weapons being confiscated through TSA checkpoints despite travel being at a record low.

“There were more than 3,000 firearms discovered at TSA checkpoints” in 2020, LaJoye said. “This is an alarming trend, and while most passengers claim they simply forgot the gun was in their bag it represents a clear threat to public safety, especially when we consider that nearly 90% of these firearms were loaded.”