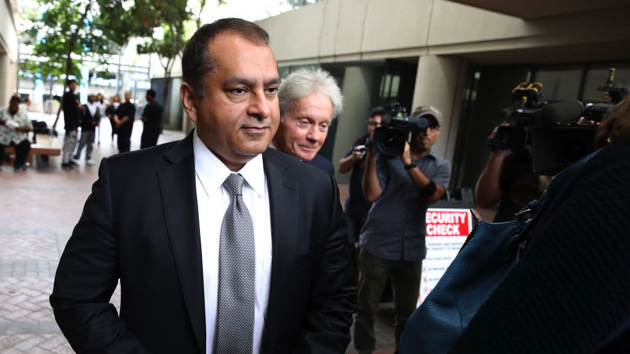 (SAN JOSE, Calif.) — The criminal fraud trial of Ramesh “Sunny” Balwani, the ex-boyfriend of convicted Theranos founder Elizabeth Holmes and a top executive at the blood-testing company, is expected to begin Tuesday in California after a series of COVID-19 related delays.

Balwani’s trial was first pushed back in January by the surge of omicron cases and then again last week when it was discovered someone who attended jury selection was exposed to someone who tested positive for COVID-19.

On Monday, juror No. 1 was excused after reporting a fever and a sore throat to the court and replaced by an alternate.

Federal prosecutors will take the floor first to give their opening statement, and then lawyers for Balwani will have a chance to unveil their defense.

Balwani’s trial is being held in the same San Jose courthouse where Holmes was convicted earlier this year. He’s also facing the same charges: two counts of conspiracy to commit wire fraud and 10 counts of wire fraud.

He has pleaded not guilty to all counts and could face decades in prison if convicted.

The government alleges Holmes and Balwani perpetrated a yearslong scheme to defraud investors and patients by intentionally misleading people about the capabilities of their blood-testing technology.

A federal jury found Holmes guilty on four counts of fraud in January. The 38-year-old is scheduled to be sentenced in September after the expected conclusion of Balwani’s trial.

The pair was originally charged in the same case, but their trials were severed after Holmes revealed she planned to testify that Balwani subjected her to mental and physical abuse. She held back tears on the stand in December as she told the jury that Balwani forced her to have sex and “impacted everything about who I was.”

Balwani firmly denied the allegations in a filing.

A Holmes juror exclusively told ABC that the jury largely disregarded the emotional testimony in deliberations.

But juror No. 6 told ABC News that the jury convicted Holmes regardless because “everything went through her.”

Theranos was the brainchild of 19-year-old Holmes, who dropped out of Stanford to pour herself into building the blood-testing business. Her company later created a miniature device dubbed the “Edison,” which investor witnesses at her trial said they believed could run any blood test.

Holmes paraded the novel technology to the likes of media mogul Rupert Murdoch and the DeVos family, raising hundreds of millions of dollars.

By 2013, the Silicon Valley startup began to roll out its testing to Walgreens stores, with plans to expand nationwide. Holmes also recruited several prominent people to sit on her board of directors including Gen. James Mattis and former U.S. Secretaries of State Henry Kissinger and George Shultz.

But Theranos came under fire in October 2015 when a Wall Street Journal investigation revealed less than 10% of the company’s blood tests were ran on the Edison, according to the report.

Three years later, in March 2018, the Securities and Exchange Commission filed charges against Holmes, Balwani and Theranos, claiming they had fraudulently raised more than $700 million from investors.