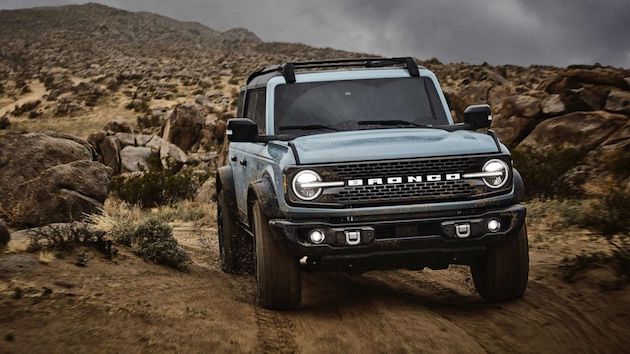 Truck sales have exploded in the last 15 months. The F-Series’ reign over its pickup competitors — 44 years and counting — was ironclad. Americans seemed eager for an electric vehicle that suited their daily driving needs and off-roading fantasies.

The F-150 Lightning may be one of Ford’s most important vehicles in the company’s storied history. The Dearborn automaker has already received more than 70,000 deposits for the truck, Ford’s second electric vehicle following the 2019 debut of the Mustang Mach-E SUV.

To build and develop these innovative, highly technological EVs, Ford has to follow the same tried-and-true strategy it has done for years: Sell gas-gulping trucks and sport utility vehicles to the masses. SUVs and trucks have proliferated in showrooms as automakers — and consumers — largely abandon passenger cars.

“Automakers need to keep producing high-margin vehicles with internal combustion engines [ICE] to fund this electric transition,” Arun Kumar, managing director at AlixPartners, a consulting firm with a focus on automotive, told ABC News. “Automakers take that cash and put it toward EVs. This transition to electrics takes a long time. It’s not a tomorrow thing.”

Ford says the F-150 Lightning, which starts at $39,974 and qualifies for federal and state tax credits, can travel an EPA-estimated 230 miles on a standard-range battery or 300 miles with an extended-range battery. The Mach-E can get up to 305 miles of driving range. By 2030 Ford expects 40% of its global vehicle volume to be fully electric and the company recently increased its commitment to electrification from $22 billion to $30 billion.

As Ford accelerates its efforts to get longtime customers to buy EVs, the rollout of the long-awaited Bronco, the legendary nameplate Ford revived last year, goes into full gear.

Demand for the boxy ute has been so strong that customer deliveries could extend into 2022, Ford has warned. The Bronco gets an estimated combined 21 mpg — if owners choose the 2.3-liter turbo-four engine. The Sasquatch package and Black Diamond trim each return a paltry 18 mpg; opting for the manual transmission further reduces the Bronco’s fuel economy.

The gas-powered F-Series, Ford’s lifeblood, can be configured with a 3.5-liter PowerBoost V6 engine, the only full hybrid powertrain available in a pickup, and has an EPA-estimated 25 mpg rating on 4×2 models. Without the hybrid engine, the fuel economy slips to 19 mpg with the 5.0-liter V8 4×4 (or 20 mpg for the 4×2). The 2021 Ford Expedition MAX 4WD, a massive, three-row SUV, gets a measly combined 18 mpg, according to EPA estimates.

“These vehicles don’t sell to the EV crowd and making moves to get away from gasoline gas-guzzlers is inherently risky,” Ed Kim, vice president of industry analysis at AutoPacific, told ABC News. “Automakers are really trying to appeal to a new customer type on the backs of their existing customers. The fact that these vehicles print money is what’s allowing automakers to invest in EVs.”

Karl Brauer, executive analyst at iSeeCars.com, said automakers will have to carefully balance EV production with the market’s appetite for gasless vehicles.

“It’s very popular now to make a bold statement about removing ICE models from your lineup,” he told ABC News. “It’s a great PR message to put out but these nice predictions never really mean that much. No one knows what will be going on in five years. Who will hold these executives accountable?”

He added: “If automakers don’t produce cars that people want to buy, they’ll have to retrench and make a different move.”

Nearly every automaker currently sells at least one EV and electrics account for 2% of the U.S. automotive market. Kumar predicts 20% of new vehicle sales in North America will be EVs in less than a decade, though he acknowledged that industry predictions swing wildly, from 5% to 75%.

“Lots of trial and error is going on in the market,” Kumar noted. “Automakers are pushing lots of EVs but there’s only so much volume out there that consumers are willing to buy.”

Sweden’s Volvo said in March that its entire lineup would switch to battery power by 2030. British automaker Jaguar informed the world in February that it would reinvent itself as an EV automaker by 2025. The marque sells just one EV now, the I-PACE SUV, with sales totaling only 5,000 units since its debut in 2018.

“The brand is at this fork in the road — continue with multiple powertrains or go electric?” Rob Filipovic, director of product planning at Jaguar Land Rover North America, told ABC News. “We have to remain relevant as a brand and our focus is on going electric.”

That doesn’t mean fans of Jaguar’s melodious, throaty V8 engine are out of luck. Jaguar on Wednesday said its flagship F-TYPE sports car will only be built with V8 engines in 2022 — dropping both the four- and six-cylinder engines available now. The 5.0-liter supercharged V8 produces 444 or 575 horsepower, depending on the P450 or R model.

Bentley Motors was the first automaker to transform itself, committing to a fully electric lineup by 2030. The decision marks a radical departure for the 102-year-old automaker, prized for its 12-cylinder engines and Babylonian conveyances that do not, at least currently, have environmentally-friendly reputes.

The Continental GT and GT convertible are listed by the EPA as two of the least fuel efficient vehicles on the market with 15 mpg, slightly better than the Bugatti Chiron Pur Sport (10 mpg) and Lamborghini Aventador (10 mpg). There’s the Bentayga Speed (14 mpg), fitted with a W12 engine that makes 626 hp, moves from 0-60 mph in 3.8 seconds and has a top speed of 190 mph.

In May, Bentley unveiled its latest addition to its SUV family: The Bentayga S, a sporty, muscular SUV with a 4.0-liter turbocharged V8 that produces 542 hp and 568 lb.-ft. of torque. The Flying Spur, Bentley’s large, cushy sedan, went on sale with a V8 for the first time this year. Its EPA rating is a combined 17 mpg versus 15 mpg for the 12-cylinder model.

A hybrid powertrain for the Flying Spur is planned with an electric version to follow, according to Bentley product manager Hans Holzgartner.

“A lot of people can no longer justify a W12 in today’s world,” Holzgartner told ABC News. “It’s such a big powerplant. The V8 is 16% more efficient [in fuel consumption] and delivers 99% of what drivers need in terms of performance with less weight at the front of the car and therefore better balance, benefiting fuel economy and CO2 emissions.”

Kim of AutoPacific said automakers will experience little if any pushback from consumers if they cannot meet these good-intentioned EV goals. Plus, selling highly profitable trucks and SUVs while promoting eco-friendly cars has been done before, he argued.

“Toyota for years has been perceived as a very green brand almost entirely due to the Prius,” he said. “In reality, Toyota is a full-line automaker. There’s the V8-powered Tundra pickup, Sequoia and Land Cruiser — gas-guzzlers like the trucks General Motors and Ford put out. Companies can absolutely do both.”

General Motors said it plans to support its core ICE products via updates and new technologies through 2035 as it aggressively moves to eliminate tailpipe emissions. Its new battery-powered vehicles — the GMC Hummer EV, upcoming electric Chevrolet Silverado, Cadillac LYRIQ and refreshed Bolt EV — are part of GM’s wave of 30 electrics offered globally by 2025.

“To be successful in our mission, the company must offer the best ICE vehicles on the market as we accelerate development of our EV programs,” Doug Parks, GM executive vice president of global product development, purchasing and supply chain, told ABC News. “Our focus is on providing desirable, durable and capable products that will help all of our customers, including truck and SUV drivers, make the transition to EVs over time.”

He added: “GM is committed to an all-electric future because it is the right thing to do and critical to the long-term viability of our business as the world transforms.”

Of course, the biggest roadblocks to all EVs are the charging challenges and high prices. Kumar of AlixPartners said automakers also face another dilemma.

“Not all new EVs will be successful,” he said. “Can automakers sell enough of them to make a profit on this investment? That is the question.”