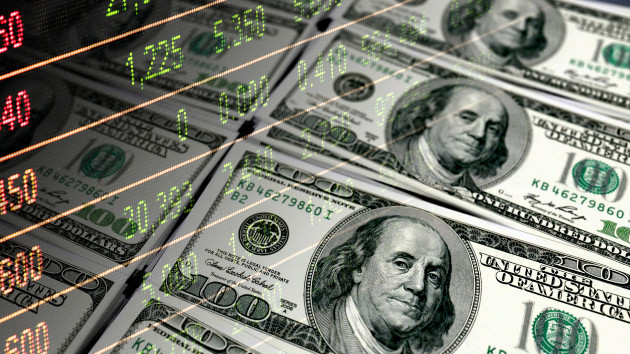 (NEW YORK) — Shares of Tesla plummeted 12% on Tuesday, wiping nearly $50 billion from the company’s value and eliciting scrutiny of CEO Elon Musk as he appears to focus on Twitter.

The losses exacerbated a skid that goes back months. Since Musk acquired Twitter in late October, Tesla stock has fallen by half. Since last January, when Musk began investing in Twitter, the company has lost nearly three-quarters of its value.

In early trading on Wednesday, Tesla stock jumped about 3%, recovering some of the losses.

The precipitous drop this week followed a disappointing sales report for the last three months of 2022, which fell short of Wall Street expectations. Tesla delivered 405,000 vehicles from October through December; analysts anticipated 420,000 deliveries.

In all, Tesla sold a total of 1.3 million cars last year, which marked a 40% increase from the year prior. The figure fell short of Tesla’s stated goal of 50% annual sales growth.

Further, some analysts and major investors have sharply criticized Musk over a perceived lack of focus on Tesla, saying the company needs leadership as it contends with an adverse business environment.

“We all know Tesla management needs to be 100% focused at the moment,” Ross Gerber, CEO of Gerber Kawasaki Wealth & Investment Management, tweeted on Tuesday.

Gary Black, the managing director of investment firm the Future Fund, said on Monday in response to the company’s latest report on sales: “No way to sugar coat this.”

Tesla and Elon Musk did not immediately respond to ABC News’ request for comment.

Previously, Musk has attributed the falling stock price to rising interest rates, which typically benefits savers who stand to gain from an uptick in the interest yielded by accounts held at banks.

“As bank savings account interest rates, which are guaranteed, start to approach stock market returns, which are not guaranteed, people will increasingly move their money out of stocks into cash, thus causing stocks to drop,” Musk said last month in response to concern from a prominent Tesla investor.

Musk said late last month that he will resign as head of Twitter when the company identifies a successor.

The world’s richest person has sold nearly $40 billion worth of Tesla stock since late last year, including a $3.6 billion sale as recently as last week.

The sales have reduced the stake Musk holds in Tesla, raising questions about his continued level of involvement with the company.

Since he acquired Twitter, Musk has made dramatic changes. He fired top executives and cut the company’s 7,500-person workforce in half, while reinstating some formerly suspended accounts.

For his part, Musk has defended his actions at Twitter as part of an aggressive effort to rescue the company from financial peril, which he described in a Twitter Spaces interview in December as an “emergency fire drill.”

“That’s the reason for my actions,” he added. “They may seem sometimes spurious or odd or whatever.”

In an interview last month, Musk vowed to stop selling Tesla stock until at least 2024, though he has previously violated commitments to halt sales of the stock. He insisted that he hasn’t missed “a single important Tesla meeting” since acquiring Twitter.

Tesla remains the top seller of EVs in the U.S. but its lead has slipped in recent months as competitors offer a host of affordable alternatives, a S&P Global Mobility report showed in November.

Responding to weakened demand, Tesla announced in December that it would offer $7,500 discounts on Model 3 and Model Y vehicles delivered in the U.S. that month.

In a tweet on Tuesday, Musk appeared to acknowledge how his fortunes had changed: “12 months ago, I was Person of the Year,” he said.