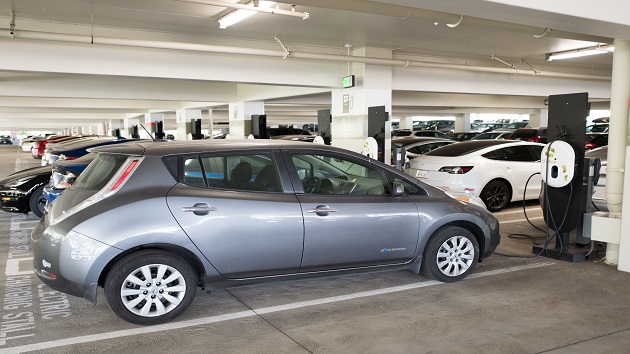 (NEW YORK) — Last month, Washington Gov. Jay Inslee signed a climate change legislative package that included a goal to have every passenger car registered or sold in the state be an electric vehicle starting in 2030.

Other states may be following Washington’s lead.

Environmental experts told ABC News that while Washington and other states that set the 2030 registration deadline face uphill battles, including creating a strong charging infrastructure, their legislative moves could have a major impact on the rollout of EVs in the country.

“It’s aggressive but it’s OK to have aggressive goals to move the market,” Gregory A. Keoleian, a professor at the University of Michigan School for Environment and Sustainability and director of the Center for Sustainable Systems, told ABC News.

Washington state’s bill, which was signed on March 25, set a goal to make “all publicly owned and privately owned passenger and light duty vehicles of model year 2030 or later … an EV by 2030.” The 2021 version of the bill originally proposed mandating all new registrations starting in 2030 be an EV, however, that was changed during the current session.

An interagency state committee is tasked with completing a report by the end of 2023 to lay out concrete plans on what the state has to do to meet the deadline.

Keoleian acknowledged that Washington’s proposal still has a way to go, but it is similar to other state environmental laws that have contributed to carbon footprint reductions.

Specifically, he likened the EV goal to state-issued renewable portfolio standards, which gave utilities a deadline to provide a percentage of their energy from renewal sources.

Thirty-one states have renewable portfolio standards in place and “half of all growth in U.S. renewable electricity generation and capacity since 2000,” has been associated with those policies, according to the U.S. Energy Information Administration.

“Having the states set policies that are going to ensure sales are going to be electric will be important for the industry making the vehicles. You’ve got to create a market in order for [automakers] to get moving,” he said.

Last year, General Motors announced it would only sell EVs by 2035 and Ford announced at least 40% of its lineup will be EVs. Their moves took place after California first announced its 2035 deadline for electric vehicle registrations.

A report by AAA Washington found that in order for Washington to have only zero-emission vehicles on the road by 2030, there needed to be a 40% annual increase in EVs. There were 50,520 EV registrations in Washington as of Dec. 30, 2020, trailing California, Florida and Texas with the most EV registration in the country, according to the U.S. Department of Energy.

Deepak Rajagopal, an associate professor at the UCLA Institute of the Environment and Sustainability, also told ABC News that Washington state’s 2030 goal and the similar proposals are bold but they come with a huge risk.

Rajagopal noted that the country’s EV charging infrastructure is still way behind where it should be to accommodate the needs of current EV engines and motorists’ demands.

“A policy like this will have some positive impact and there will be probably more investments in Washington State, but will it be big enough to help meet the target? That’s a question that no one really has an answer to,” he said.

Even with uncertain success, Washington’s 2030 EV registration deadline “might raise other states’ ambitions,” and have a bigger impact nationally, Rajagopal said.

If more states adopt the goal, or if Washington shows significant progress in its plan, the federal government would be pushed to speed up its plans to increase EV adoption and improve EV infrastructure, Rajagopal added.

“It really matters what the big states do,” Rajagopal said. “If they lead the charge with EV adoptions and succeed, other states and Washington (D.C.) won’t hesitate to take the risk.”

Keoleian said he wouldn’t be surprised if other states jump on the 2030 deadline fast, especially since the country is facing a gas crisis with no end in sight.

“All of the pieces are needed. We need the vehicles to be built, we need the demand for consumers, and we need the charging infrastructure,” he said.