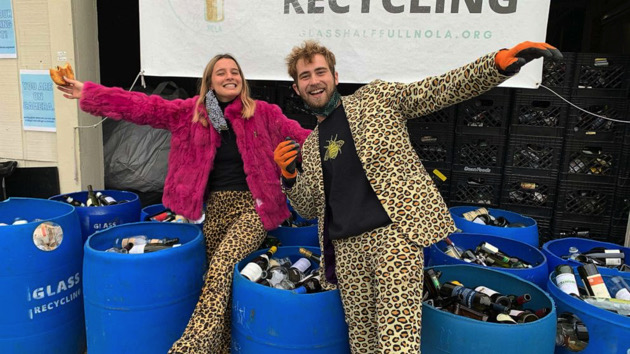 (NEW ORLEANS) — What’ll happen to this bottle of wine after it’s been finished and thrown away?

That’s the question that Franziska Trautmann and Max Steitz say they pondered one night. They thought about the bottle’s destiny to join the over 11 million tons of glass fated for a landfill.

The Tulane University alumni say they then came up with the idea to turn that bottle back into the glass that birthed it. Two years after Glass Half Full NOLA brought its glass recycling services to New Orleans, Trautmann and Steitz went from crushing beer bottles in their backyard to running a company that they say has recycled over 2 million pounds of glass.

“I was a victim of this mindset before I started Glass Half Full NOLA, which is, ‘individuals can’t do anything. It’s like all the corporations that need to change and like they are the problem,’” said Trautmann. “Then after setting all of this up, I realized how much individuals can do.”

The company is now going viral on TikTok for its satisfying glass-crushing videos. The recycled glass is crushed into sand or glass cullet, which are broken glass pieces. The sand or cullet is then sold for flooring, glass products, as gravel for driveways or used in sandbags, which is a valuable resource during hurricane season.

The company runs off of volunteers, including Tulane scientists. While the process is still in testing, Glass Half Full says recycled glass could potentially be used to help restore Louisiana coastlines and other natural areas.

Katie Russell, a senior professor in Tulane’s chemical and biomolecular engineering department, said she wants to help restore the coastline because New Orleans is her home. Russell organizes student volunteers for Glass Half Full and says she thinks it’s important to preserve the port town as nature intended.

“We are taking a product, a waste product that would be put into a landfill. And instead, we’re converting it into a useful product that can be used to do good in the community,” said Russell.

Russell also leads students in conducting experiments to see how the glass can be safely used in nature and manufacturing. Louisiana loses a football field worth of land every 100 minutes on average due to coastal restoration, so the company is focused on restoring land, according to Glass Half Full.

Trautmann said she hopes that others will also start making more sustainable, small choices to help protect the planet. She recalled that when the business first started, she didn’t see much traction until the word got out.

“As two kids, we lived a pretty sheltered life in our little two-lane bubble. And all of a sudden, we were getting inquiries from local nonprofits and organizations and other New Orleanians who wanted to help,” said Trautmann. “That kind of lit the fire under us to keep going and make this even bigger.”

Trautmann and Steiz believe the little actions people do each day to take care of the planet are the things that matter most in the world.