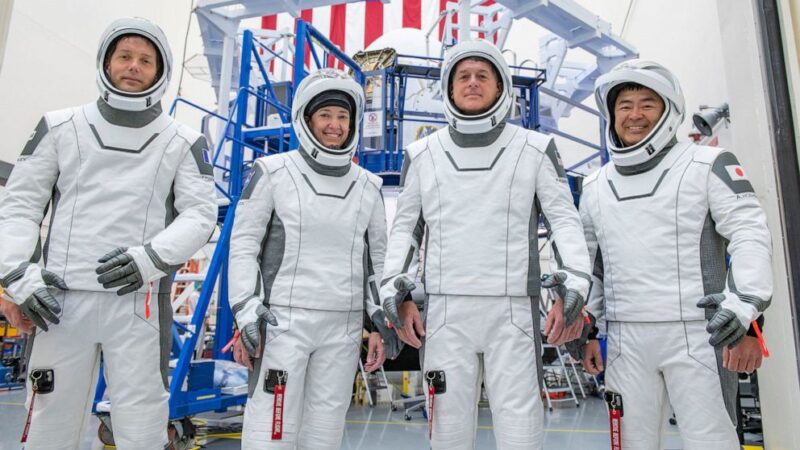 It ushers in a new era of reusability in human space exploration, as it will use the same Falcon 9 rocket that sent four astronauts to the ISS last November and the same Crew Dragon spacecraft that sent and returned two astronauts during the first crewed SpaceX flight last May.

The crew is composed of NASA astronauts Shane Kimbrough and Megan McArthur as well as Japan Aerospace Exploration Agency (JAXA) astronaut Akihiko Hoshide and European Space Agency (ESA) astronaut Thomas Pesquet. They are set to stay on the space station for a six-month science mission.

“I met with the crew last night, they are ready to go,” NASA’s Acting Administrator Steve Jurczyk​​ said at a pre-launch news conference from the Kennedy Space Center on Wednesday. “I asked them what they look forward to most in the mission, and they said launching and getting up on station and getting to work.”

He lauded that this marks the “third launch in less than a year” for NASA’s Commercial Crew program, which tapped private sector firms such as SpaceX to help bring launch capabilities back to U.S. soil after a nearly decade-long dependency on Russia.

The launch was originally scheduled for early Thursday morning but was moved to Friday due to downrange inclement weather. Currently, liftoff is scheduled for 5:49 a.m. ET on Friday from the historic Launch Complex 39A at NASA’s Kennedy Space Center in Florida.

The Crew Dragon spacecraft is scheduled to dock to the space station about 5:10 a.m. ET on Saturday.

As of Thursday, the U.S. Space Force 45th Weather Squadron forecast a 90% chance of favorable weather conditions in the area for a launch.

NASA’s live coverage of the launch kicks off at 1:30 a.m. ET on its website and social media accounts.

Jurczyk said Wednesday that NASA’s Jet Propulsion Laboratory team received a call earlier this week from President Joe Biden, who congratulated the researchers on their success in conducting the first controlled flight on another planet.

“He told the team that his grandson asked him when was he going to travel to Mars,” Jurczyk said. “So that’s something really important that we do.”

“We enable commercial activities in space, we demonstrate leadership, and we inspire the next generation,” he said.

McArthur, the mission’s pilot, is married to fellow astronaut Bob Behnken, who was part of the historic first NASA-SpaceX mission last May. In a previous interview, Behnken said this time it’s “her turn to focus on getting her mission accomplished” and his turn to watch their young son.

Kimbrough, 53, is an Army veteran and the mission’s commander. The father of three has logged some 189 days in space and first joined NASA as a flight simulation engineer in 2000.

Pesquet, 43, is the first ESA astronaut to join a NASA-SpaceX mission. He has also logged a chunk of time aboard the ISS, spending six months on the station in 2016. The French astronaut will serve as a mission specialist.