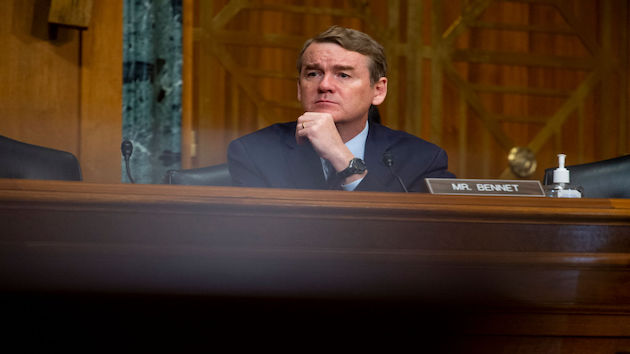 (WASHINGTON) — Sen. Michael Bennet on Thursday introduced a bill that would create a federal watchdog for the oversight of Big Tech companies, empowering the new agency to address controversial issues like algorithm bias and transparency in content moderation.

The bill from the Colorado Democrat comes as the tech giants face heightened scrutiny from both sides of the aisle in Congress, which has generated high-profile hearings and adversarial rhetoric but has struggled to pass legislation.

The latest push for reform follows a series of bombshell revelations from Facebook whistleblower Frances Haugen as well as an agreement among European Union lawmakers over a landmark law that would closely regulate the sector. The Washington Post first reported Bennet’s bill.

“As a country, we should take pride that most of the world’s leading tech companies were founded in America. But they aren’t start-ups anymore. Today they rank among the most powerful companies in human history,” Bennet said in a statement on Thursday.

“It’s past time for a thoughtful and comprehensive approach to regulating digital platforms that have amassed extraordinary power over our economy, society, and democracy,” he added.

The new agency would develop and enforce rules that regulate company conduct, mimicking the role played by oversight bodies that police pharmaceutical drugs or media standards, according to a summary of the bill provided by Bennet’s office.

The proposed legislation calls for the formation of the Federal Digital Platform Commission made up of five members, who would hold hearings, carry out investigations, and implement new rules. The agency would also include a Code Council featuring individuals from the industry and civil society who can offer further technical expertise, the bill summary said.

The bill will likely face a difficult path to passage in the Senate, where Democrats hold a narrow 50-50 majority due to a potential tie-breaking vote from Vice President Kamala Harris. While some Republicans have criticized Big Tech firms over perceived anti-conservative bias and other faults, they have also shown a reluctance to expand the regulatory reach of the federal government.

Meanwhile, some Big Tech leaders have expressed support for a sector-specific regulatory agency like the one outlined in the bill. At a congressional hearing in March 2021, Facebook CEO Mark Zuckerberg said a new agency “could be very effective and positive for helping out.” Microsoft President Brad Smith last month at a privacy summit signaled his approval of such an oversight body.

The Federal Trade Commission (FTC), led by legal scholar and Big Tech critic Lina Khan, serves as a major regulatory agency for the tech giants. Last July, President Joe Biden signed an executive order that called on the FTC to develop rules on data collection and to challenge prior company mergers. But progress on regulation at the agency remains limited.

In a separate effort from the Biden administration, the Justice Department has brought a lawsuit against Google over alleged antitrust violations.

Current watchdogs have proven insufficient for the new challenges posed by the tech industry, said Tom Wheeler, a former chairman of the Federal Communications Commission who called the proposed bill “historic.”

“Our existing regulatory agencies were built in the industrial era on industrial-age concepts, and the challenge of 21st-century regulators is: How do you take statutes built in response to entirely different realities and relate them to what’s happening in the digital world?” said Wheeler, who previously called for the formation of such a watchdog.