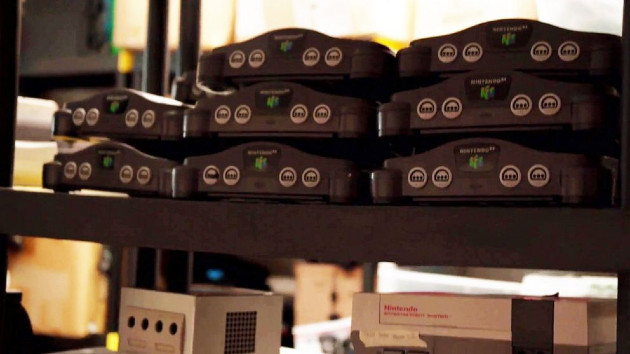 (NEW YORK) — They were once coveted birthday and holiday gifts for millions of millennials and Generation Xers.

They were Nintendo Entertainment System bundled with Super Mario Brothers and Duck Hunt or that copy of Pokémon Gold for the Game Boy Color.

And even though those vintage game systems and cartridges are long gone from store shelves to make way for more advanced tech, the beloved games are still in high demand. In some cases, they can sell for thousands of dollars for collectors and retro gamers.

“Everybody’s into this stuff because this is the stuff they grew up on,” Nick Pittelli, the CEO of the retro gaming store “The Game Island,” told Impact x Nightline.

Impact x Nightline takes a look at this growing and lucrative trend in an episode now streaming on Hulu.

Although retro gaming has had a following ever since the first video game systems hit the market in the 70s, experts say the trend has boomed in recent years, and along with it the profits.

The industry-wide resale price for Nintendo 64 systems, which sold for $199.99 when it launched in 1996, or roughly $375 in 2022 dollars, can now fetch as much as five figures depending on its condition and rarity, according to experts.

Brandi Ahmer, a Maryland police officer who has a giant collection of video games, arcades and other vintage electronics, showed off her basement where she keeps her gaming relics. She told Impact that she was able to snag some rare consoles at bargains.

Ahmer said she has no intention of selling any of her vintage systems or games and is always on the lookout to add to her collection.

“There’s something about these older systems,” she said. “But it’s like there are memories of a simpler time, you know, your childhood.”

Ahmer isn’t the only one feeling that nostalgia.

Pittelli said that demand for vintage games grew during the pandemic and the value of some items in his shop has gone up by 40%.

Joey Walker-Denny, the social media manager for the Pennsylvania-based retro game store DK Oldies, told Impact that his team gets about 300 emails a day from customers looking to either buy or sell their used games.

“I’ve seen larger emails than that,” he told Impact.

Walker-Denny noted that his team, which has grown tremendously since the store opened in the 2000s, takes great care to ensure that the games are in working condition for their customers, in some cases going as far to replace key components, such as a Game Boy screen.

“A lot of the stuff that we sell is over 30 years old. So you can imagine it needs a thorough cleaning,” he said.

Pittelli and other retro gaming experts said they expect that more people will be on the lookout for vintage games to reclaim their youth.

“I think there’s a stigma, like, ‘Oh yeah the people who shop or go to a video game store. They’re super nerdy.’ No, it’s not like that anymore. Rappers come here. Artists come here,” Pittelli said.