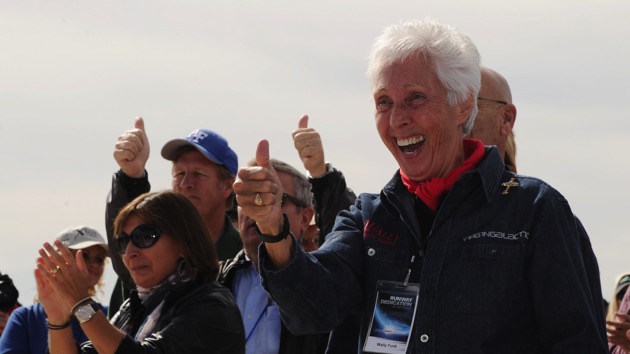 (NEW YORK) — Wally Funk, a pioneering female pilot who dreamed of being an astronaut in the 1960s, will fly to space later this month with Amazon CEO Jeff Bezos on the first crewed flight for his space-faring firm Blue Origin.

The flight will fulfill a lifelong dream for Funk, 82, and make her the oldest person ever to fly to space.

Funk’s dreams of becoming an astronaut date back to the original U.S.-Soviet Space Race era, when she was the youngest graduate of the privately-funded Woman in Space Program that later became known as the “Mercury 13” due to its 13 women participants. Female pilots went through the same physiological and psychological tests as the astronauts selected by NASA for Project Mercury. The women, however, never ended up flying to space.

In an Instagram video shared by Bezos revealing the news Thursday, Funk said she already knows the first thing she will say upon landing back on Earth: “Honey, that was the best thing that ever happened to me!”

“Back in the 60s, I was in the Mercury 13 program. They asked me, ‘Do you want to be an astronaut?’ I said, ‘Yes,"” Funk said in the video. “They told me that I had done better and completed the work faster than any of the guys. So, I got a hold of NASA — four times — I said, ‘I want to become an astronaut,’ but nobody would take me.”

“I didn’t think that I would ever get to go up,” she added. “They said, ‘Wally, you’re a girl, you can’t do that!’ I said, ‘Guess what, doesn’t matter what you are, you can still do it if you want to do it, and I like to do things that nobody has ever done."”

Despite not becoming a NASA astronaut, Funk still blazed trails for women in flight. She was the first female Federal Aviation Administration inspector and later the first woman National Transportation Safety Board investigator. She has amassed some 19,600 flying hours and taught more than 3,000 people how to fly.

The crew for the New Shepard spacecraft’s first flight consists of Jeff Bezos, Mark Bezos (Jeff’s brother), Funk, and one unnamed private citizen who paid $28 million in an auction for Blue Origin’s final seat. Blue Origin has perviously said the name of the auction winner will be released in the coming weeks.

The inaugural crewed flight for Blue Origin is scheduled for July 20. In total, the flight is only about 11 minutes and approximately four minutes will be spent above the so-called Karman line that is defined as the boundary between Earth’s atmosphere and outer space.