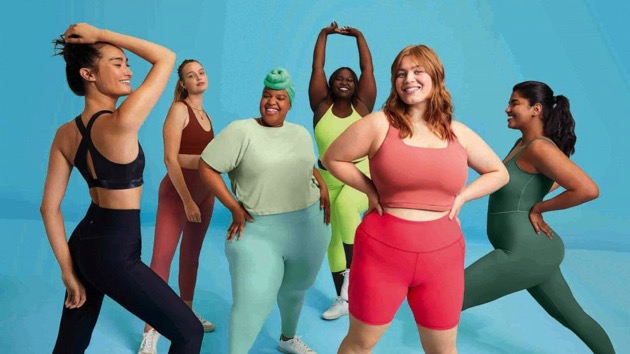 More than a campaign, the fashion retailer announced it would be fully revamping the company’s size offerings to feature every women’s style in every size ranging from 0-30 and XS-4X, along with no price differences.

The brand also confirmed Wednesday that these changes will start rolling out in stores and online starting Aug. 20.

The store’s entire shopping experience surrounding size inclusion, store visuals and more are getting a full-on upgrade, the company said.

In 2016, a study published by the International Journal of Fashion Design, Technology, and Education revealed that the average size of an American woman is between 16 to 18.

At the top of this year, the CDC published 2015-2018 data revealing that the average weight of American women is 170.8 pounds and 5 feet 3 inches. In most U.S. stores, these measurements equate to a pants size of 16 and up or large to extra large.

However, GMA previously reported that only about 2,000 stores cater to women above size 12 compared to more than 60,000 stores that cater to traditional straight sizes, 00 to 12, according to Torrid’s CEO Liz Muñoz.

Old Navy’s president and CEO Nancy Green noticed an opportunity to change the women’s shopping experience by making it more inclusive regardless of size, and she essentially ran with it.

“Bodqueality is not a one-time campaign, but a full transformation of our business in service to our customers based on years of working closely with them to research their needs,” Green said. “I’m proud of the collaboration across our Old Navy teams to evolve the retail experience for women.”

With efforts to provide updated sizing that felt true to a variety of body types, Old Navy said it administered 389 body scans to create digital avatars based on real women’s bodies.

Fit clinics with models that wear sizes 20-28 were also ran to build fresh fit blocks based on each of their unique proportions.

Similar to other big-name stores such as Nike and most recently Victoria’s Secret, the company said it will feature mannequins in a variety of sizes such as four, 12 and 18.

Online, shoppers can also use a new toggle feature that allows them to select their preferred default model display.

Several other retailers have a designated area for plus sizes, but Old Navy is also doing away with separate sections and creating space where everything will be displayed in one place in-store and online.

Pricing will now also be the same throughout sizing. Before Bodequality, there was a price difference between straight sizes and the plus collection.

“Traditionally, to create extended size garments it requires more fabric and a different production process,” an Old Navy spokesperson told GMA. “As we launch Bodequality, we’ve transformed our process so we’ve been able to create price parity for all.”

Old Navy employees are also participating in customer-focused training with an aim to create more of an environment where everyone feels they belong, the company said.

Old Navy initially debuted its first Plus line in 2004 and in 2018 launched dedicated Plus shops in 75 U.S. stores. The following year, the company transformed 30 of those locations into size-integrated concept stores.

“Developing Bodequality allowed us to rethink the way we serve women in the retail industry,” Alison Partridge Stickney, head of women’s and maternity merchandising at Old Navy, said in a statement.

“This launch is a transformative moment for our brand and the fashion industry,” Partridge said.

With a goal to introduce Bodequality to women everywhere, the retailers will premiere a TV spot starring Emmy-nominated actress and comedian Aidy Bryant dancing alongside a diverse group of women to “I Am 100%” by Jarina De Marco.