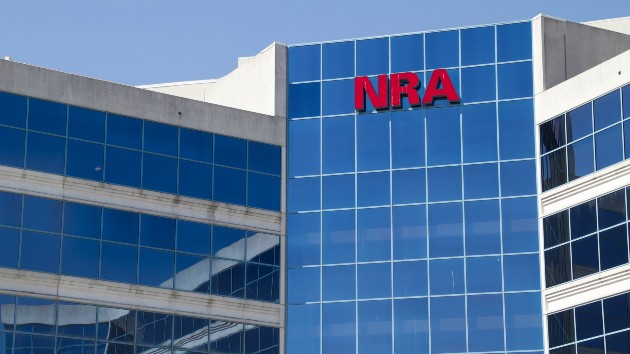 (NEW YORK) — Plagued by infighting and targeted by a sprawling investigation, the National Rifle Association has found itself entangled in a legal web of its own making, several experts told ABC News, as a federal judge considers the fate of the organization’s widely scrutinized bankruptcy case.

Prosecutors in New York sued the NRA last summer in a bid to dissolve the gun lobbying juggernaut, accusing it of being “fraught with fraud and abuse” — a claim the NRA has repeatedly and vehemently denied. The NRA subsequently filed for bankruptcy protection and announced plans to reincorporate in Texas.

The bid for a restructuring in the Lone Star State is one in a series of high-risk moves that the NRA is undertaking in a fight for survival, legal experts say, as the organization tries to maneuver around the threat posed by New York Attorney General Letitia James’ probe. The organization did so in part to free itself from the “toxic political environment of New York” and to “streamline costs and expenses, proceed with pending litigation in a coordinated and structured manner, and realize many financial and strategic advantages,” according to a January letter penned by CEO Wayne LaPierre.

Judge Harlin Hale of the U.S. Bankruptcy Court for the Northern District of Texas is now weighing motions filed by James’ office and others to dismiss the NRA’s bankruptcy case claim. Legal experts interviewed by ABC News posit that the chances of a dismissal are strong, particularly given the NRA’s insistence that the organization remains financially viable — a position that undermines the traditional purpose of a Chapter 11 claim.

“If the alternative is that the New York attorney general shuts down the NRA, what do they have to lose with this strategy?” Levitin said. “They are out of ammo.”

But another scenario could pose an entirely different threat to the beleaguered gun group: If Hale allows the NRA’s bankruptcy claim to march forward, he may then choose to appoint a trustee to investigate allegations of fraud — or even assume control of the organization.

“The first thing a trustee would do would be to, in effect, take over control of the organization, all of the assets, and all of the records,” said Jay Westbrook, a bankruptcy scholar at the University of Texas-Austin. “That would be a very undesirable development from the point of view of the people now controlling the NRA.”

Pamela Foohey, a bankruptcy law professor at the University of Indiana, suggested that the appointment of a trustee or an examiner could further imperil the organization.

“The most likely scenario in bankruptcy when a trustee is appointed is a plan of liquidation, then dissolution,” Foohey said.

In its motion to dismiss the NRA’s bankruptcy claim filed earlier this month, the New York attorney general’s office requested the appointment of an independent trustee in the event that Hale allows the bankruptcy case to move forward.

Michael J. Collins, an attorney representing the NRA, called the request for a trustee a “disappointing but predictable response” from James’ office.

“We will continue to operate within the parameters of the bankruptcy court — to the benefit of the NRA, its members, and its vendors,” Collins said.

Regardless of whether Hale dismisses the bankruptcy case, experts say the NRA faces increasingly long odds of reconciling its legal woes and regaining its foothold as one of the most powerful forces in U.S. politics. The group’s decision to seek bankruptcy has a clear end — reincorporation in Texas — but the means it pursued to arrive there have broadly confounded legal experts.

“What is it possibly thinking with the bankruptcy filing? If there’s a clear strategy, I cannot deduce it,” Levitin wrote this week in a bankruptcy blog. “Maybe I’m missing something and the NRA is crazy like a fox, but it really looks like a move done out of desperation.”

Among other allegations in its lawsuit, the New York attorney general accuses the NRA’s leaders of using the organization’s funds for personal use. The NRA has vehemently denied these claims.

In addition to the New York attorney general’s attempts to have a trustee assigned, a separate effort spearheaded by other forces within the NRA is seeking additional court-ordered oversight of the organization.

Phillip Journey, a Kansas state judge who was recently elected to the NRA board of directors, asked the court last week to appoint an “independent examiner” to determine “the veracity of the alleged fraud, dishonesty, incompetence, and gross mismanagement that has plagued the NRA’s reputation.” Experts said the appointment of an independent examiner would likely lead to the appointment of a trustee.

“I think it’s in everyone’s interest that these questions be resolved quickly, and that the fratricidal behavior continue for as short a period of time as possible,” Journey told ABC News. “Let’s try to get to the bottom of this.”

In his court filing, Journey also suggested that NRA leadership failed to properly inform board members of its plan to file bankruptcy — a possible violation of the organization’s bylaws. William Brewer, counsel to the NRA, pushed back on Journey’s assertion.

“Unfortunately, [Judge Journey] seems to mistakenly believe the NRA reorganization plan did not follow board and internal protocol,” Brewer said in a statement. “This plan was undertaken in full compliance with NRA policy. The plan has been widely endorsed by NRA board members, NRA members, elected officials, and other key stakeholders.”

On Wednesday, the U.S. government’s bankruptcy office moved to dismiss Brewer as a “special counsel” to the NRA in the case, saying that Brewer is “deeply entangled in numerous disputes at the core of the NRA’s bankruptcy cases” — including some of the “billing improprieties” cited by the New York attorney general’s office in its complaint.

Charles Cotton, chairman of the NRA’s audit committee, denied the allegations in the government’s filing, which he said “reflects a misinformed view of the Brewer firm, its billings, and its advocacy for the NRA.”

Experts said they believe Hale will first rule on the motion to dismiss the bankruptcy case before undertaking the question of a trustee or examiner.

The New York attorney general’s office, in its motion to dismiss, accused the NRA of “fleeing or seeking an end run around a pending regulatory enforcement action in New York.” The ad agency Ackerman McQueen, which claims to be the NRA’s largest creditor, made a similar case in its motion to dismiss, accusing the NRA of filing for bankruptcy in “bad faith” as part of an effort to avoid legal scrutiny in New York state.

Both filings cited public commentary from NRA leaders, who have repeatedly said that the organization remains financially stable and that the bankruptcy litigation is meant to circumvent scrutiny in New York state.

Robert Lawless, a bankruptcy professor at the University of Illinois, said both points “immediately raise questions of a bad faith filing.”

“Big cases tend not to get dismissed for bad faith issues,” Lawless said. “But there’s a strong chance of that here.”

Brewer said that any allegations of a bad faith filing reflect “another transparent move in a partisan crusade to shut down the NRA.”

And some of the gun group’s most high-profile supporters are applauding the organization’s attempts to restructure itself in Texas.

In August, reacting to news of the New York attorney general’s lawsuit, then-President Donald Trump suggested the NRA move to Texas and “lead a very good and beautiful life.” And in a tweet last month, Texas’ Republican governor, Greg Abbott, told the NRA, “Welcome to Texas — a state that safeguards the 2nd Amendment.”

AI photography is taking over social media. Why are some concerned about privacy?