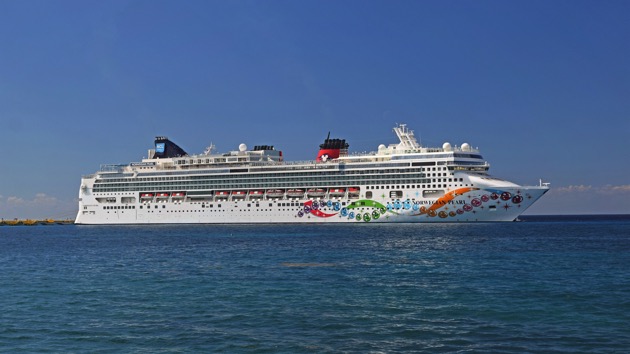 (NEW YORK) — Norwegian Cruise Line can now require guests sailing out of Florida to show proof of COVID-19 vaccination, a federal judge ruled after the line sued the Sunshine State over its vaccine passport ban.

“We want to do everything we can to keep COVID off our ships,” Norwegian CEO Frank Del Rio said in an interview on Good Morning America Tuesday. “It’s the best thing to do, the safest way to travel.”

Florida Gov. Ron DeSantis said cruise lines would face a $5,000 fine per passenger if they defied the state’s law that prohibits companies from requiring customers and employees to provide documentation of COVID-19 vaccination status.

U.S. District Judge Kathleen Williams said Sunday that Norwegian would “suffer significant financial and reputational harms” if it was forced to abide by Florida’s law.

DeSantis’ office responded in a statement to the ruling, saying, “A prohibition on vaccine passports does not even implicate, let alone violate, anyone’s speech rights, and it furthers the substantial, local interest of preventing discrimination among customers based on private health information.”

“Here’s a state that depends on tourism and apparently it’s not in their best interests to keep not only our residents safe but our visitors safe so it is very disappointing,” Del Rio said.

Norwegian’s win means it can set sail from Florida on Sunday with a fully vaccinated ship.

Norwegian is requiring all guests and crew to be fully vaccinated at least two weeks prior to departure. Each passenger will also be tested prior to boarding. Unlike other cruise lines that have made exceptions for children, Norwegian is not allowing any unvaccinated child under the age of 12 to board.

“The cruise lines have to do whatever they can to make sure we’re safe and they can’t go through another episode like they did last year when we had ships stuck out at sea with people with COVID on them,” he told ABC News.

Del Rio previously threatened to move the company’s ships out of Florida if it was not allowed to mandate vaccinations by guests.

“At the end of the day, cruise ships have motors, propellers and rudders, and God forbid we can’t operate in the state of Florida for whatever reason, then there are other states that we do operate from, and we can operate from the Caribbean for a ship that otherwise would have gone to Florida,” Del Rio said during an earnings call in May.

Other major cruise lines like Royal Caribbean, Celebrity and Carnival told ABC News they are still trying to figure out how the Norwegian ruling affects them.

Last week, some lines announced they will now require pre-boarding testing and masks to be worn in certain indoor areas — even for vaccinated guests.

“We have seen a number of ships report some isolated cases of COVID,” Colleen McDaniel, the editor-in-chief of the website Cruise Critic, told ABC News. “And what we’ve seen is these have been mostly among vaccinated passengers, and certainly the delta variant seems to be having an effect on that.”

Despite at least 95% of guests and crew being vaccinated, Carnival Vista, which departed out of Galveston, Texas, reported a “small number of positive cases” last week — prompting the cruise line to change its policy.

Masks will now be required for sailings Aug. 7 through Oct. 31.

“These new requirements are being implemented to protect our guests and crew while on board, and to continue to provide confidence to our homeports and destinations that we are doing our part to support their efforts to protect public health and safety,” Carnival Cruise Line President Christine Duffy said in a statement. “We expect these requirements will be temporary and appreciate the cooperation of our guests.”

Holland America and Princess Cruises, which are both owned by Carnival Corporation, announced the same new cruising requirements.