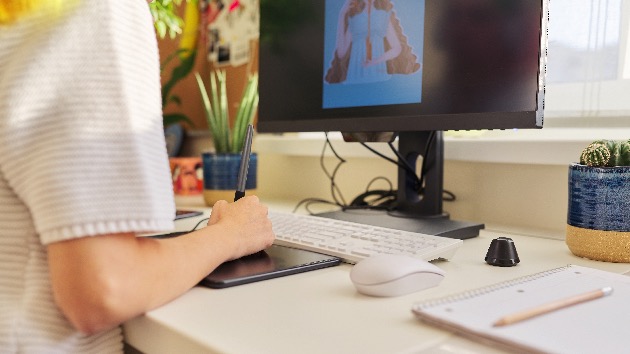 (LONDON) — The meteoric rise of Bitcoin and other cryptocurrencies has seen many once skeptical institutions embrace a digital alternative to traditional currency.

But in the art world, a similar evolution is taking place.

The last two years has seen an explosion in the sales of digital artworks, which have been embraced by major auction houses and have fetched prices ranges from a few dollars to the tens of millions.

Unlike traditional artworks, these can be duplicated exactly with a couple of clicks of a mouse, which raises a divisive question: Can a digital artwork ever really be as valuable as a piece that was physically created by an artist?

Behind the explosion in the digital art marketplace are nonfungible tokens, known as NFTs. The artworks are digital assets that can range from anything to a photograph, a video file or even a piece of music and they are backed by what is effectively a digital ownership record, both of which are part of the blockchain — a public digital ledger — which authenticates the digital items as unique.

In recent months, NFTs have made headlines for changing hands at eye-popping prices.

Last month a collage by digital artist Mike Winkelmann, known as Beeple, fetched over $69 million when it was auctioned by Christie’s; an NFT of Twitter CEO Jack Dorsey’s first-ever tweet fetched a comparatively meager $2.9 million.

In one unusual case, a digital artwork twinned with a physical painting that was created by a humanoid robot in Hong Kong fetched nearly $700,000 at auction.

In addition, a host of major brands have entered the market with a diverse array of companies including the NBA, Breitling watches, LVMH, Nike, Formula 1 and Real Madrid among the big names launching NFT projects.

Opinion is sharply divided, however, as to whether the millions pouring into the NFT sector is money well spent.

“It is clear to me we are moving fast into a digitally native world. For the younger generations I would argue digital items are of even more importance than physical ones — kids prefer a skin in a game to new sneakers,” Miami-based digital art collector Pablo Rodriguez-Fraile told ABC News.

Fraile made headlines last year for selling a Beeple digital artwork, comprising a roughly 10-second video clip that can be viewed for free online, for some $6.6 million, after paying around $67,000 for the work just months before.

Fraile is highly confident that digital artworks are well placed to hold their significance and value as well as traditional physical artworks do in the long term.“This movement will be of more importance than any artistic movement we have witnessed in our lives. I strongly believe that the most important digital works will be of a lot more significance than most of the tier one creators today,” he said.

On the other side of the argument, experts cite a range of issues with the technology and the smart contracts it underpins as undermining the overall value of many digital assets.

“They [NFTs] don’t give you any rights other than bragging rights,” Nicholas Weaver, a lecturer in computer science and a researcher at UC Berkeley’s International Computer Science Institute.

“[An NFT] doesn’t actually convey any ownership rights. You don’t gain copyright over the NFT. In reality, it’s more like a baseball card. It’s a cute little piece of paper. But the thing is, is since you don’t actually have the baseball card itself on the blockchain, but just a pointer to it, it can actually disappear at a moment’s notice,” he explained.

These limitations, however, do not appear to be putting a dent in the growth of the market for NFTs.

In addition to high-dollar sales, the overall market for NFTs has grown exponentially in recent years. Between 2019 and 2020, the amount of dollars transferred through NFT sales grew by 2,800% year-on-year, according to Nadya Ivanova, chief operating officer at foresight business L’Atelier BNP Paribas.

Ivanova sees the possibility that both the market and the technology that underpins it evolving over time in a way that could allow it to operate in a way that conveyed more value to buyers.

“What you’re buying is certain rights that come from ownership. So, for example, you can buy it [an NFT], you can sell it, you can rent it down the line … not necessarily have the right to reproduce it commercially.

Away from the multimillion-dollar sales, many smaller artists and even hobbyists say that the evolution of the market has been empowering for them.

One such artist is Jay, who preferred not to use his full name in print, a Dublin-based creator in Ireland of pixel art – a style that evokes the graphics of vintage video games — under the name Genuine Human Art.

Describing his digital art as a creative outlet rather than a full-time job, Jay told ABC News that he has sold around 20 unique pieces, some of which he has sold multiple editions of, for around $4,000 to $6,000 worth of cryptocurrency.

He feels that the emergence of the NFT art market has been game-changing for artists such as him.

“I can’t overstate how much of a difference this makes,” he told ABC News.

“For me what matters is the emergence of a new digital art market. For years, artists have been trained through social media to see their art as disposable, valueless. This movement changes that. It’s changing the lives of young artists in particular. In what have been very difficult years, it’s bringing income to artists in a way that just hasn’t happened before. Not like this,” he added.

Whether the NFT art boom is a symptom of a major shift in cultural norms around the ownership of intangibles or, as some critics suggest, an economic byproduct of the pandemic, with bored people holding large amounts of appreciating crypto-wealth and looking for new ways to invest, will ultimately be determined by the market.

For the time being, however, if you’re looking to spend thousands or even millions of dollars on a JPEG, there is not shortage of opportunities to do so.