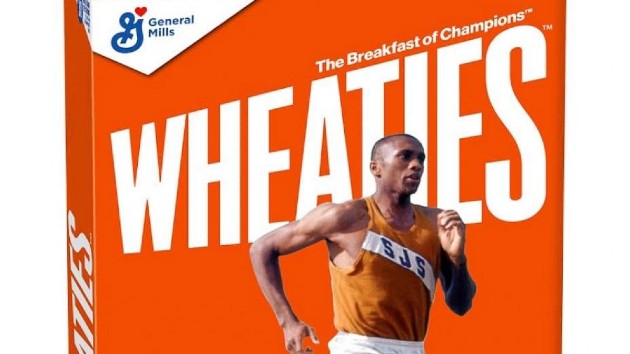 Smith, a racial equality trailblazer and record-breaking track and field world champion, will be honored with a limited-edition box that will debut this April.

“As a world champion, I always wanted to be on a Wheaties box,” Smith said in a statement. “To now be recognized by Wheaties and selected to grace the cover of their box, in the class with other great champion athletes, is an honor.”

All sales of the commemorative box will benefit the NAACP and the specialty item is currently available for pre-sale orders online.

At just 24 years old, Smith established himself as the top track and field athlete at the 1968 Olympic games in Mexico City where he won the gold medal in the 200-meter sprint. He was the first man to break 20 seconds in the 200-meter and crossed the finish line triumphantly with his hands in the air.

During that pivotal moment on a global stage, standing on the podium during the medal ceremony, Smith made a bold and culture-defining gesture when he raised his fist in silent protest for racial justice, solidarity and human rights.

His salute caused great controversy at the time, but Smith has continued to be a pioneer for equality. The story behind his Olympic moment was recently made into a documentary film, With Drawn Arms, by director and artist Glenn Kaino and photographer and director Afshin Shahidi.

The doc explores the story behind that critical moment in American history and how it spawned one of the most iconic images of protest from the past century. Smith continues to inspire and empower athletes 50 years later.

Smith also reveals in the film that one of his dreams was to appear on the “Breakfast of Champions” box.

“While Tommie was a world champion runner, his work as one of the original activist athletes laid the foundation for champions to use their platform and stand for something extraordinary,” Taylor Gessell, brand experience manager for Wheaties, said in a statement. “We are proud to honor this true champion and trailblazer with this special commemorative Wheaties box.”

General Mills first created its slogan, “The Breakfast of Champions,” and paired it with the bright orange Wheaties boxes in 1934. Influential athletes — from Lou Gherig and Jesse Williams to Michael Jordan and Serena Williams — have also been featured.

What is a gas tax holiday? The federal proposal could offer short-term relief for drivers