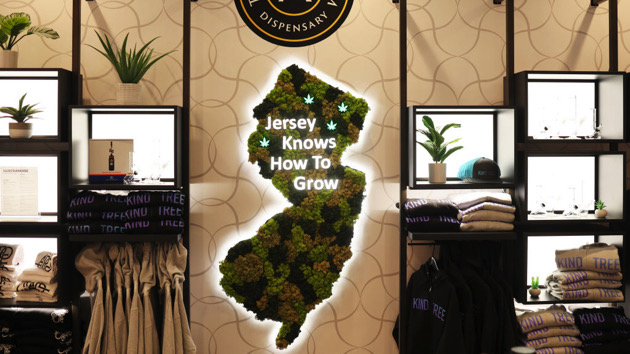 (NEW YORK) — The numbers “421” have apparently eclipsed “420” at least in New Jersey, where cannabis consumers celebrated Thursday’s first day of legalized pot sales and toking up for adults.

Weed buyers lined up before sunrise outside seven recreational cannabis dispensaries across the Garden State waiting for the doors to open and lay down some green for some green for the first time without a medical excuse or legal risk.

The first customer in line outside the RISE dispensary in Bloomfield described the moment as “Christmas morning.”

“I didn’t even sleep tonight,” Chris, who was in line before 6 a.m., told New York City ABC station WABC. “I was, like, working a later night, and I just knew I had to be here. I just want to be part of that. Today is the day that we’re just free to do it without any consequences.”

State officials purposely chose April 21 for the inaugural day to legally light up to avoid dispensaries being overwhelmed with business on April 20, the traditional day pot smokers worldwide celebrate weed.

New Jersey becomes the 18th state in the nation to legalize the sale of recreational pot to consumers 21 and older. Vermont became the first state in 2018 to do so. Washington, D.C., and Guam, an unincorporated U.S. territory, also allow legal cannabis commerce.

“This is a historic step in our work to create a new cannabis industry,” New Jersey Gov. Phil Murphy said ahead of the launch.

State officials said they are considering more than 300 applications for retail cannabis licenses. New Jersey is prioritizing granting licenses to dispensaries run by minorities, women and disabled veterans, especially those whose careers have been harmed by marijuana convictions on their records.

The dispensaries are only accepting cash purchases because under federal law marijuana is still considered a Schedule 1 drug, a status that discourages banks and credit card companies from extending services to cannabis operations.

The House of Representatives voted this month to approve legislation to decriminalize marijuana at the federal level and remove criminal penalties for certain cannabis-related offenses. Senate Majority Leader Chuck Schumer, D-N.Y., has vowed to make marijuana legislation a priority and is working on a separate bill with Sens. Ron Wyden, D-Ore., and Cory Booker, D-N.J., expected to be introduced soon but would need all Democrats and at least 10 Republicans to pass the Senate.

Melissa Correa of Plainfield told WABC that the historic day in New Jersey was extra special because it falls on her 42nd birthday.

Waiting to make a purchase of some party favors at the RISE dispensary in Bloomfield, Correa said, “It looks great. It smells great.”