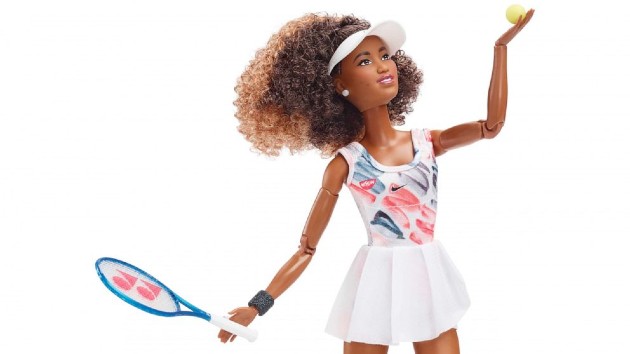 (NEW YORK) — In addition to being an athlete, Naomi Osaka is now also a doll.

Mattel unveiled its new Barbie Role Model doll based on the tennis star Monday morning, and it’s one of the company’s launches of the summer.

The Naomi Osaka Barbie doll’s outfit is a nearly identical rendition of the same one the tennis player wore during the 2020 Australian Open. The doll is styled wearing a white Nike visor, a printed tank, tennis skirt, bright blue sneakers and a head full of voluminous brunette curls.

The look was completed with a look-alike of her Yonex tennis racket.

Available Aug. 15 online for $29.99, the Naomi Osaka Barbie doll is suitable for ages 6 and up and has been designed to be fully posable and bendable at its elbows and knees.

“It’s such an honor to be a part of the Barbie Role Model series and to remind young girls that they can make a difference in the world,” Osaka said in a statement. “I want young girls everywhere to feel empowered to dream big and to know that if they believe in themselves that anything is possible!”

Osaka isn’t a completely new face to the Mattel family. In 2019, the brand honored her as one of its Barbie Sheroes along with 20 other women from around the world in celebration of the toy maker’s 60th anniversary as well as International Women’s Day.

Last year, the company tapped Osaka to work together again to bring the latest doll into fruition for collectors and her dedicated fans.

“She has paved the way for future generations of girls to dream bigger, and through her unwavering courage and honesty, shown the world the importance of being your own biggest champion,” said Lisa McKnight, senior vice president and global head of Barbie & Dolls. “Naomi continues to break boundaries on and off the court and is a powerful role model to fans everywhere.”

In June, Osaka withdrew from Wimbledon due to mental health struggles. However, she will continue on to compete in this year’s Tokyo Olympics.

This past weekend, the tennis star was also awarded an ESPY for best female athlete.

Downfall of FTX and ex-CEO Sam Bankman-Fried: By the numbers