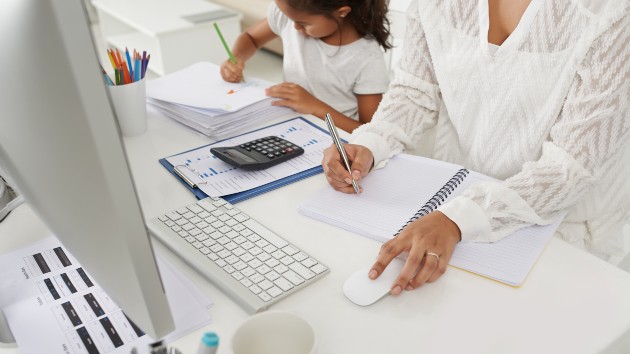 (NEW YORK) — Just a few days before Mother’s Day, when moms are supposed to be celebrated for the work they do, comes a reminder of the stark penalties mothers still face in the workforce.

May 5, 2021, marks Mom’s Equal Pay Day, or how far into the year the average working mom has to work to earn what fathers earned last year alone.

Among full-time, year-round workers, mothers are typically paid only 75 cents for every dollar paid to fathers. That pay gap results in monthly losses of $1,275 and annual losses of more than $15,000, according to the National Women’s Law Center, a policy-focused organization that fights for gender justice.

“That means that moms had to work more than 16 months to make as much as dads were paid in 12 months,” Claire Ewing-Nelson, who leads NWLC’s research on the motherhood wage gap, told ABC News’ Good Morning America.

The inequities for moms are displayed starkly in the “Moms Deserve More Flower Store,” an online flower shop launched this year to highlight what its organizers describe as the “the true cost of adequately thanking” moms.

“A dozen roses are not going to cut it this year,” Reshma Saujani, the flower store’s lead organizer and founder of Girls Who Code and the Marshall Plan for Moms, said in a statement, in part. “Because what moms really want—what they really need—is a national reckoning: one that reimagines our culture and rebuilds a system to actually value our work.”

Mom’s Equal Pay Day comes this year more than one month after Equal Pay Day for women, the day that women overall have to work into 2021 to make what white, non-Hispanic men earned in 2020 alone.

On average, women working full-time, year-round are paid 82 cents for every dollar paid to men, according to the NWLC. The wage gap for moms is even greater because of what’s known as the motherhood wage penalty, according to Ewing-Nelson.

This year’s Mom’s Equal Pay Day is also happening as working moms continue to feel the devastation brought on by the coronavirus pandemic. The full reckoning of the pandemic is not even shown in the current data on the motherhood pay gap as the most recent wage data is pre-pandemic, according to Ewing-Nelson.

“I think we can definitely expect that the wage gap will get worse,” she said. “[The pandemic] been pretty disastrous and it’ll be a while before we even understand just how bad it’s been.”

The recession caused by the coronavirus pandemic has put more than two million women out of the workforce, data shows.

The caregiving and service sector industries dominated by women were among those hardest hit by the coronavirus lockdowns and restrictions, and working moms in particular were left during the pandemic to deal with a lack of childcare resources.

While mothers make up nearly 16% of the overall workforce, they account for over one in five of front-line workers providing essential services during the pandemic, according to the NWLC.

And during the pandemic, women ages 25 to 44 are almost three times as likely as men of the same age group to not be working due to child care demands, according to research from the U.S. Census Bureau and Federal Reserve.

“Moms have been forced to do this really impossible balancing act where they’re trying to hold down a job, they’re trying to take care of kids who are doing remote schooling, or they can’t get any care at all,” said Ewing-Nelson. “It’s just pushed a lot of women and moms out of the labor force entirely so they aren’t working or looking for work so they’re not even captured in the unemployment rates we’ve been seeing, which have been staggeringly high.”

“That sets women and moms in particular up for long ranging consequences that could impact them for decades to come,” she said. “When you’ve been out of the labor force for a long time, you’re more likely to just take the first job that is available, even if it’s lower paying or lower quality.”

The long history of being underpaid compared to men also put working moms at a disadvantage even entering the pandemic, Ewing-Nelson noted.

The data is even worse for mothers of color, who were also disproportionately impacted by the pandemic.

Last year, 10% of Black mothers and 10% of Latina mothers were unemployed and those two populations have among the highest wage gaps, according to data shared by the NWLC.

“Focusing on that big overall number [of 75 cents for every dollar paid to fathers] is already pretty devastating, but when you really drill down that there are these compounding inequities, that make the numbers even worse,” said Ewing-Nelson. “It’s a result of institutional racism compounding sexism compounding all of the bad ways that moms are treated in the workforce.”