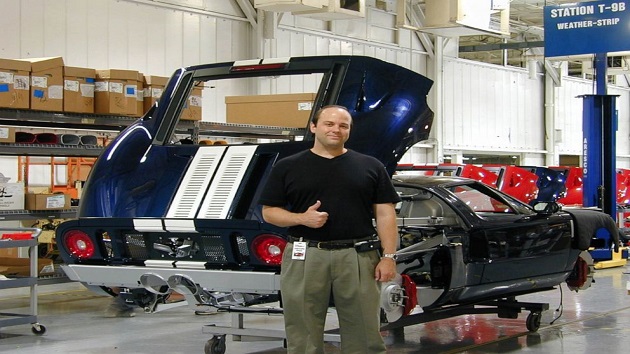 (NEW YORK) — When Karl Brauer’s brand-new Ford GT arrived at his home in Southern California in 2005, it had 7 miles on the odometer.

He and his wife even took it to Denver, a 15-hour drive, for his high school reunion.

“It was so durable. I drove it everywhere,” Brauer told ABC News. “The car was engineered to go around racetracks and do long distance drives. I didn’t treat it like a delicate rare Russian Fabergé egg.”

He sold it 13 years later to another car aficionado with 31,000 miles. Its replacement? A 2017 Ford GT that cost north of half a million dollars. He drives it weekly, though a bit more gingerly.

There are plenty of enthusiasts who shell out big cash for exotic supercars and keep them ensconced in hangars and underground garages, plastic still on the steering wheel. There’s also a growing number of drivers, like Brauer, who gladly rack up miles on high-end sports cars that sell for stratospheric prices. The conveyances may post extreme numbers — speed, horsepower, torque — yet they’re also being built for comfort and convenience these days (and come with cupholders, wireless charging and the latest in-demand tech).

The founder of the SSC Tuatara, a $2 million hypercar that may be the fastest vehicle on the planet, refers to his 1750 hp creation as “docile” on local streets.

“My wife drives this car,” Jerod Shelby told ABC News. “It has a comfort mode and there are large touch screens inside.”

Supercars are not what they once were. Decades ago, usability and practicality did not factor into the design.

“The Miura had a poorly designed carburetor and it caught on fire all the time,” MotorTrend senior features editor Jonny Lieberman told ABC News said. “Driver comfort was last thing [Lamborghini] thought about with the Countach.”

Now, Lamborghinis can handle the demands of routine driving, even if it takes some careful jockeying to enter and exit the car.

“Automakers are selling more supercars than ever before,” Lieberman said. “Adding creature comforts gets more people to buy them.”

He added: “They’ve radically changed. Modern supercars start, won’t catch on fire and you can go to the grocery store in them. And you no longer have to worry about towing your supercar to a racetrack. You can race it and drive it home. That’s a big shift.”

Brauer bemoaned the owners who hide their rarefied supercars “under towels and tarps,” afraid of a potential chip or scratch.

“I have strong opinions about people who don’t drive the cars: It’s pathetic,” he said. “What a waste.”

Brauer also has a message for his fellow GT owners who are reluctant to experience what their 660 hp, 550 lb.-ft. of torque supercar has to offer.

“It’s insulting to designers and engineers who make this a very real, functional car,” he said.

When Ford was reviewing applicants for the GT, the Dearborn automaker selected wealthy collectors and gearheads who said they’d drive the low-production supercar, according to GT program manager Michael Severson.

The latest model, built to win the 24 Hours of Le Mans endurance race in 2016 — it won its class — does not have the elbow room and luxury frills that other supercars offer. But it does come with Apple CarPlay and Android Auto compatibility plus two smart-charging USB ports, he pointed out.

Plus, “I have successfully picked up a week’s worth groceries in a new Ford GT using an empty passenger seat,” Severson told ABC News.

British automaker McLaren, known for its hardcore, track-focused supercars, took a decidedly different approach with its new, $210,000 GT. McLaren designers and engineers developed super soft and supple leather for the interior and water resistant textiles for the rear luggage area. They also directed their resources and attention on the seats, perfecting the foam for long journeys.

“We set out to build a supercar that offered more convenience and creature comforts,” Tom Taylor, a product manager at McLaren, told ABC News. “A supercar you can drive every day — that was the mission statement for the GT. We spent slightly more effort on chasing additional refinement … and dialed in on ride comfort.”

The GT, even with the extra cargo space, longer body and pleasantly comfortable ride, can still frighten the uninitiated. It comes with track mode and launch control and the handsome GT hits 0 to 60 mph in 3.1 seconds. The 4.0-liter V8 engine generates 612 hp and 465 lb.-ft. of torque.

“It has a seven-speed dual clutch gearbox and still sounds like a performance V8,” Taylor said. “The GT has a dual character.”

McLaren customers drive on average 5,000 to 8,000 miles per year and many commute to work in their supercars, according to Taylor.

“They’re not not easy to live with, they drink fuel, they cost a fortune to service — all misconceptions of supercars,” Taylor said.

Audi fan Erik Dietz has traveled the globe in his manual 2015 Nardo Gray R8. With 147,000 miles and counting, Dietz and his mechanical sidekick have traversed 26 countries and 48 states. They’ve survived blizzards, ice storms, hellacious switchbacks and lengthy road trips in darkness. For years, Dietz would slap winter tires on the all-wheel drive V8 supercar for annual skiing pilgrimages in Canada.

“This car has been through a lot,” the 30-year-old told ABC News. “It’s been shipped overseas. It’s been tracked 150 times. I love driving it.”

Dietz recently replaced the engine and has upgraded the R8’s wheels, brakes, exhaust and suspension. He even installed a roll cage for track days.

“The R8 is very comfortable and has maintained that comfort over the years,” he noted. “It’s like a second home. I’ve spent more time in the car than other places.”

Like Brauer, Dietz said he’s perplexed — and slightly annoyed — at owners who park their supercars for good.

“They’re worried about depreciation and maintenance costs,” he said. “Engineers designed the R8 to be driven. They’re extremely reliable cars.”

The second generation V10 R8, available with 602 hp and 413 lb.-ft. of torque, easily handles double duties as a luxury grand tourer and fearsome racer, according to Anthony Garbis, product manager for Audi.

“There’s no throttle lag on this car … the pedal is connected to your brain,” he told ABC News. “It also has enough of storage space for a weekend. Decent gas mileage too for highway cruising. The R8 comes with all the luxury feels that you expect from an Audi.”

He went on, “Anyone can make a performance car. But making one that’s usable every day and still excels on the track is the challenge.”

French hypercar maker Bugatti touts the functionality of its $3 million-plus cars that boast 1,500 hp and 300 mph top speeds. Ferraris, with their melodious engines and bracing torque, are also happy meandering at speed limits that won’t land the driver in jail.

The “widow maker” and “snap oversteer” monikers no longer apply to present-day supercars thanks to modern traction control systems, noted Jalopnik Editor-in-Chief Rory Carroll. Supercars are also undergoing a metamorphosis for rich motorists in their 50s and 60s who have “trouble standing up from a low-slung sports car,” he said.

“Product planning decisions are geared toward older buyers,” he told ABC News. “People expect their cars to do everything. You don’t have to choose between being really comfortable and being really fast. The cars are still massively fun to drive but some of the mystique is gone.”

Brauer said he intends to keep darting around town in his Ford GT even as the odometer ticks up. Though noticeably louder, raw and more cramped inside, he does not regret selling his previous GT.

“This one is crazier looking and will always be the center of attention,” he said. “People turn their heads and honk.”