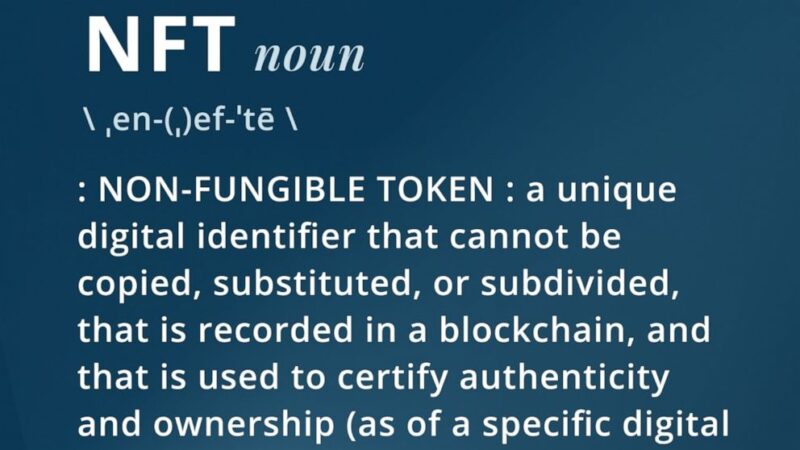 (NEW YORK) — After months of buzz around non-fungible tokens, or NFTs, the three-letter word has officially been added to Merriam-Webster’s dictionary. But the publisher and language authority took the moment in blockchain history a step further by offering up the animated NFT of its definition for auction.

Peter Sokolowski, Merriam-Webster’s editor-at-large, told ABC News’ Good Morning America that while he’s come to know NFTs through the world of fine arts and memorabilia, “there’s really nothing I’ve seen that compares with the specificity of this one, which is to say it is literally the definition of the activity, the endeavor, the archive and the minted product.”

The proceeds of the auction will go to Teach for All, a network of organizations in 60 countries that incorporates Teach for America and ensures education opportunities for children, which he said “was the perfect charity to benefit from this.”

“It makes it this nice symmetrical, elegant way of expressing this new term. We don’t normally throw a party for every new word we add to the dictionary,” he added with a laugh. “Words enter the dictionary at their own pace. When a word is found in many publications and likely to be encountered by many readers — then that means that editors think that their readers know what [the word] is.”

Sokolowski continued, “As soon as the linguistic white gloves come off and there’s no longer a little parenthesis that explains it, then we see that the word has become essentially a naturalized citizen of the English language that’s ready for the dictionary and has to be defined.”

Here is how the official definition will read in the Merriam-Webster dictionary:

Non-fungible token (NFT): Noun ˌnän-ˈfǝn-jǝ-bǝl- : a unique digital identifier that cannot be copied, substituted, or subdivided, that is recorded in a blockchain, and that is used to certify authenticity and ownership of a specific digital asset (such as the original version of an online photo or video).

“This is a term that has come into the world in a big way in recent months. Cryptocurrency has been around for about a dozen years. Blockchain has been around for about 10 years,” Sokolowski said. “If people are using a term in many places, then there is no advocacy or committee [on our end], it simply goes in as soon as we can get a good, carefully edited definition in.”

Sokolowski also explained that NFT is actually referred to as an initialism, like FBI or CIA, where the letters are spoken individually.

“When you study and you learn etymologies” — the study of the origin of words — “like that fungible comes from fungi, to perform in Latin, you never forget it. That knowledge becomes yours, you own it and carry it with you forever,” he said. “Carrying away the possession of knowledge is something that has always been part of what a dictionary does”

On Tuesday at 9:30 a.m. ET the first-of-its-kind auction will be available on OpenSea, the world’s largest digital marketplace for crypto collectibles and NFTs, and will close at midnight ET on Friday, May 14.

“This project is about establishing NFTs as a medium with lasting value through the permanence of a record in the country’s most-trusted dictionary,” Nate Chastain, head of product at OpenSea, said in a statement. “We’re excited that a brand like Merriam-Webster is using NFTs to engage with its audience in new ways.”