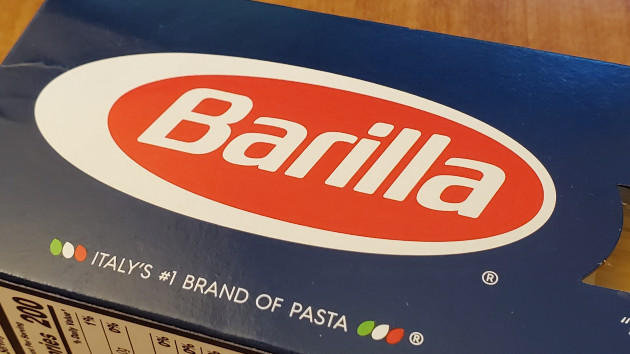 (NEW YORK) — Barilla Pasta is being sued for its marketing as “Italy’s No. 1 brand of pasta.”

A lawsuit filed last year by customers Matthew Sinatro and Jessica Prost claims that the slogan in question “leads reasonable consumers to believe that Barilla’s products are made and/or manufactured in Italy using ingredients from Italy.”

Sinatro and Prost, who said they bought one box of angel hair and two boxes of spaghetti, respectively, claim in the lawsuit that they purchased Barilla thinking the contents were made in Italy. They also claim the colors of the Italian flag and imagery “further reinforces the notion that the products ‘are authentic pastas from Italy.” The duo are also challenging “the packaging for 52 additional Barilla-brand pastas across several sub-brands: Classic Blue Box, Collezione Artisanal, Gluten Free, Veggie, and Whole Grain,” which they did not purchase.

In a motion to dismiss, Barilla argued that the slogan is a registered trademark and “its utility is to exclusively identify Barilla (not Italy) as the source of the product.”

Barilla argued that “no reasonable consumer could be deceived” by their packaging because all 54 products — which includes Barilla-brand pastas from several sub-brands — “are conspicuously marked ‘Made in the USA’ with the location of Barilla’s headquarters in Illinois.”

While the statement appears on the blue cardboard boxes, Barilla also states on its website that its pasta “sold in the United States is made in our plants in Ames, Iowa and Avon, New York, with a few exceptions. Barilla Tortellini and Barilla Oven Ready Lasagne are made in Italy.”

When the company first opened plants in the U.S., the website states, “the Barilla family was very concerned about maintaining Barilla’s high quality standards” and ensured that the machines used to make pasta in those facilities were the same as those used in the Parma, Italy plant.

“The recipe and the wheat blend are the same as that used in Parma, Italy. Barilla purchases its wheat from around the world, ending up with the best wheat available,” the site reads.

On Monday, Judge Donna M. Ryu denied in part Barilla’s motion to dismiss and said the lawsuit can proceed.

Ryu also rejected the company’s argument that the case should be dismissed because its products “are conspicuously marked ‘Made in the USA’ with the location of Barilla’s headquarters in Illinois,” stating that the materials on which that argument rests “are not properly before the court.” Elsewhere in the order, Ryu stated that those materials — including photos of its packaging and nutrition label — were “barely legible” and “purportedly cut and pasted from third party websites, accompanied by typed captions that do not appear to have been part of the original webpages.”

ABC News’ Good Morning America has reached out to both Barilla and Clarkson Law Firm, which is representing the plaintiffs, for comment on the decision and will update with a response.

The order allows the case to move forward, but also allows Barilla to continue using the slogan as the case proceeds.