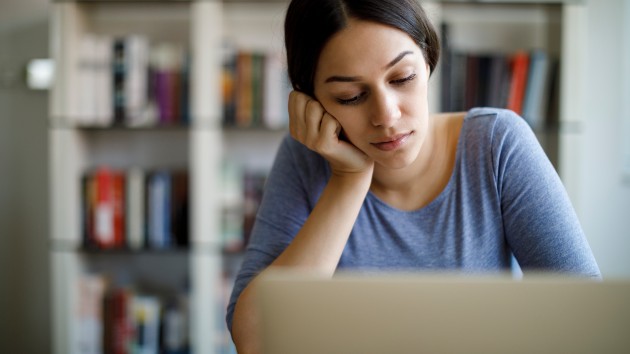 (NEW YORK) — Latinas left the workforce at higher rates than any other demographic during the COVID-19 pandemic, with little sign of recuperating even as the country starts to reopen, according to a new report.

From March 2020 to March 2021, the number of Latinas in the workforce dropped by 2.74%, meaning 336,000 fewer Latinas were in the labor force, according to a report released Wednesday by the UCLA Latino Police and Politics Initiative, a Latino-focused think tank.

That’s the biggest drop in size of any demographic group, which could have major ramifications in the economy’s recovery amid labor shortages.

Adriana Rodriguez, 36, a widowed mother of six from Chicago, lost factory jobs twice in the pandemic. In April 2020, her factory let all workers go due to the pandemic shutdown. She found work at another location, but lost that job in August due to a high number of COVID-19 cases in the workplace.

Her role as mother and the closure of schools and day care ultimately stopped her from looking for another job.

“I’m a mother and I’m a widow, so I’m the head of the family. … When they closed the schools, many women felt obligated to stay at home,” Rodriguez told ABC News in an interview conducted in Spanish. “There was no day care, there wasn’t anyone to take care of the kids. I also felt obligated to stay home, so I stopped looking for work because I have six kids here and it’s very difficult.”

Rodriguez is just one of many Latinas who lost their jobs and left the workforce in the pandemic.

Structural obstacles that contributed to the stark numbers included hyper-segregation in low-paying jobs vulnerable to pandemic shutdowns, a lack of access to education and training opportunities that would allow them to move away from low-wage labor jobs and lack of child care access, according to the report.

Before the pandemic, Latinas were projected to transform the U.S. labor force and grow in number by nearly 26% from 2019 to 2029 — a rate higher than any other group, the report said.

Instead, the coronavirus crisis crippled Latinas. The group consistently outpaced the national average in unemployment rate, by 3.16 percentage points over the past year, according to UCLA’s report.

At 19.5%, Latinas experienced the highest unemployment rate of any demographic in April 2020, when shutdowns commenced, according to U.S. Bureau of Labor Statistics data. The rate for Latinas and Black women nearly doubled compared to white women by December 2020, per the report.

It’s not just that Latinas were unemployed, they were exiting the workforce completely, meaning they did not actively look for work in four weeks. The need to take care of families and children played a major role in their decision to stop working.

A total of 337,000 Latinas dropped out of the labor force from August to September 2020, heading into the fall 2020 school semester, as many schools were still closed, according to the report.

Latinas, like Rodriguez, are “disproportionately responsible for family care obligations versus Latino men,” making them more likely to stay at home than American mothers of other racial backgrounds, according to the report.

Today, there are few signs of a quick recovery in the Latina unemployment rate and many of those not working are young. Participation in the labor force for Latinas between the ages of 25 to 54 fell from 71% before the pandemic to just below 67% in May 2021, according to U.S. Bureau of Labor Statistics data.

Not only were Latinos crippled financially by the pandemic, they were also disproportionately affected by the virus itself. They were more than twice as likely to die from COVID-19 compared to whites, according to the Centers for Disease Control and Prevention.

“Unfortunately, the COVID-19 pandemic really created a ripple effect of economic disruption in particular on communities by race, and then again, by gender,” Diaz told ABC News. “The real story here is the fact that Latinas have left the labor market, which is akin to dropping out of college. It’s really hard to get those individuals back in, and [have] a pathway towards social mobility and economic opportunity. This is harmful, not just for Latino families and communities, but the American economy at large.”

She noted that these women are not just typically young, they’re often the breadwinners of their house and outperform men in the number who have graduated college and hold business and professional occupations.

After seeing the damage of the COVID-19 pandemic, these women, who likely have households that require care whether it’s for the elderly or children, will need benefits to return back to the workforce.

“The lack of benefits, like paid family sick leave, or health insurance that is generous, affordable and provides quality access to care, or paid time off. … Absent those, it’s hard to go back to a job that is not going to allow these women workers to thrive,” Diaz said.

“It’s very important for us as Latinos to be more capable, have better opportunities, have a higher salaries. We are a fundamental part of the economy in the U.S. and we are people who like to be working entrepreneurs,” Rodriguez said. “If there was a salary raise and more sick days or days to be with our families, that would help us in very positive ways.”

From giving secondhand to no gifts at all, why some parents are changing Christmas traditions

Cryptocurrency’s wild roller-coaster ride: A look back at 2022