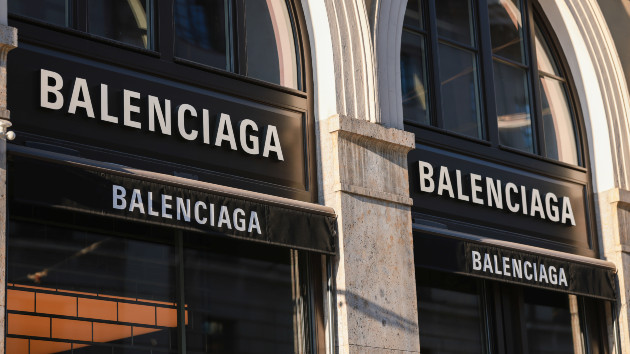 “I have been quiet for the past few days, not because I haven’t been disgusted and outraged by the recent Balenciaga campaigns, but because I wanted an opportunity to speak to their team to understand for myself how this could have happened,” she wrote on social media Sunday, Nov. 27.

Kardashian has worn Balenciaga to high-profile events like the Met Gala in the past, and walked in the luxury brand’s couture show at Paris Fashion Week earlier this summer.

Kardashian’s post comes a week after Balenciaga was criticized for its advertisements featuring children posing with the company’s plush bear bags, which wear BDSM-inspired harnesses.

One photo featured a child standing on a bed with one of the plush bear bags, surrounded by other purses and accessories, which included what appeared to be a chain leash as well as a Balenciaga branded dog collar choker.

The reality star, businesswoman and mom to North, 9, Saint, 6, Chicago, 4, and Psalm, 3, continued, “As a mother of four, I have been shaken by the disturbing images. The safety of children must be held with the highest regard, and any attempts to normalize child abuse of any kind should have no place in our society — period.”

“I appreciate Balenciaga’s removal of the campaigns and apology. In speaking with them, I believe they understand the seriousness of the issue and will take the necessary measures for this to never happen again,” she concluded.

The Spanish luxury brand previously issued an apology for the ads on its Instagram on Nov. 22, writing, “We sincerely apologize for any offense our holiday campaign may have caused. Our plush bear bags should not have been featured with children in this campaign. We have immediately removed the campaign from all platforms.”

In a follow-up statement on Monday, Balenciaga added, “We strongly condemn child abuse; it was never our intent to include it in our narrative. The two separate ad campaigns in question reflect a series of grievous errors for which Balenciaga takes responsibility.”

“The first campaign, the Gift collection campaign, featured children with plush bear bags dressed in what some have labelled BDSM-inspired outfits. Our plush bear bags and the Gift collection should not have been featured with children. This was a wrong choice by Balenciaga, combined with our failure in assessing and validating images. The responsibility for this lies with Balenciaga alone,” the brand continued.

“The second, separate campaign for Spring 2023, which was meant to replicate a business office environment, included a photo with a page in the background from a Supreme Court ruling ‘United States v. Williams’ 2008 which confirms as illegal and not protected by freedom of speech the promotion of child pornography. All the items included in this shooting were provided by third parties that confirmed in writing that these props were fake office documents. They turned out to be real legal papers most likely coming from the filming of a television drama,” Balenciaga said.

The company added, “The inclusion of these unapproved documents was the result of reckless negligence for which Balenciaga has filed a complaint. We take full accountability for our lack of oversight and control of the documents in the background and we could have done things differently.”

“I am not in a position to comment Balenciaga’s choices, but I must stress that I was not entitled in whatsoever manner to neither chose the products, nor the models, nor the combination of the same,” Galimberti wrote in the caption of an Instagram post. “As a photographer, I was only and solely requested to lit the given scene, and take the shots according to my signature style. As usual for a commercial shooting, the direction of the campaign and the choice of the objects displayed are not in the hands of the photographer.”

Galimberti also claimed he had “no connection with the photo where a Supreme Court document appears,” referring to a separate earlier ad for a purse, in which a Supreme Court ruling on child pornography laws could be seen.

“That one was taken in another set by other people and and was falsely associated with my photos,” he said.

Balenciaga has since filed a lawsuit against the North Six production company, as well as set designer Nicholas Des Jardins, over the Spring 2023 ad campaign.

According to court documents filed with the New York State Supreme Court for the County of New York on Friday, Balenciaga is seeking “redress for extensive damages defendants caused in connection with an advertising campaign Balenciaga hired them to produce” and accuses North Six and Des Jardins of “malevolent or, at the very least, extraordinarily reckless” conduct.

“As a result of Defendants’ misconduct, members of the public, including the news media, have falsely and horrifically associated Balenciaga with the repulsive and deeply disturbing subject of the court decision. Defendants are liable to Balenciaga for all harm resulting from this false association,” the fashion house said in its court filing.

Balenciaga is seeking $25 million in damages from North Six and Des Jardins.

North Six has not yet commented publicly on the lawsuit. A source close to North Six told ABC News’ Good Morning America that the production company handled logistics for that shoot, including catering, shoot permitting, location booking and crew and equipment management, but did not have creative control or input in the ad campaign and was not on set during final set arrangements.

A representative for Des Jardins told the Washington Post on Monday that the Supreme Court documents seen in the earlier ad campaign “were obtained from a prop house that were rental pieces used on film [and] photo shoots.”

“Everyone from Balenciaga was on the shoot and was present on every shot and worked on the edit of every image in post production,” said Gabriela Moussaieff, Des Jardins’ agent, who claimed Des Jardins was “being used as a scapegoat,” according to the Post.

Good Morning America has reached out to North Six and Moussaieff for comment on the lawsuit.