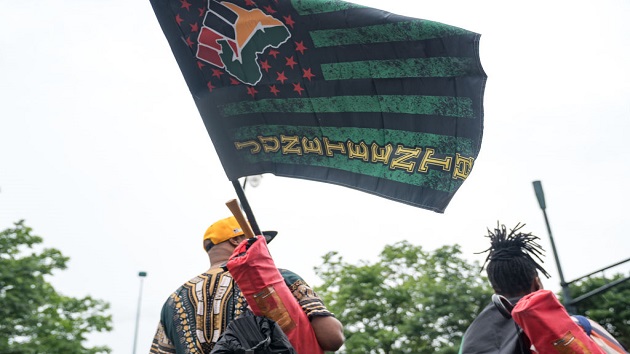 (NEW YORK) — While June 19, 1865, is widely regarded as a day of liberation, its celebration for some simultaneously brings into question just how far that freedom goes.

“The whole story behind Juneteenth was that we were technically free, but we didn’t know it and it was years before we actually truly got our freedom,” Bernard told ABC News.

Bernard said Juneteenth can be used to highlight financial equality, which is the type of freedom many, like him, have fought for.

He used student loan funds to buy his first property 25 years ago with the goal of earning extra income on the side. Now, with an extensive portfolio, the investor is the founder and CEO of The Brooklyn Bank–a nonprofit focused on financial literacy and development for people of color.

“My mission is equality,” he said. “The goal of the Brooklyn Bank is to pretty much bring the information to those that don’t have it. So many times, us as a people, we miss out on opportunities. Not because we’re not willing to learn, but because we don’t even know what we don’t know.”

Reflecting on his upbringing as a first-generation Haitian-American in Flatbush, Brooklyn, Bernard said he feels “lucky” to have come across the information that has brought him to where he is today. He said that not having a “formal financial education” during his childhood encouraged him to share what may not be readily available in their communities with others.

On Juneteenth, The Brooklyn Bank will be holding its first annual Black Money Forum in collaboration with personal finance app Stash. The free event will focus on “financial freedom, financial education, financial empowerment, and most importantly, changing the financial mindset,” Bernard said.

“A lack of information keeps people on a treadmill,” he said. “A lack of education, has people not saving and not passing wealth down to the next generation.”

According to Wealth of Two Nations: The U.S. Racial Wealth Gap, 1860-2020, the white to Black per capita wealth ratio is six to one. The paper, by researchers Ellora Derenoncourt, Chi Hyun Kim, Moritz Kuhn & Moritz Schularick, drew information from census data and tax records to analyze racial economic disparities over time and what steps should be taken to equalize them.

“So the average white American has six times the wealth of the average Black American. That’s equivalent to Black Americans holding about 17 cents for every white dollar of wealth,” co-author Derenoncourt, an economic historian and assistant professor of economics at Princeton University, told ABC News.

She said while much of the work on the racial wealth gap focuses on recent years–from the 1980s onward–, she sought to show the evolution of the gap since the Civil War to examine “the importance of American history for where the wealth gap is today.”

In 1860, the white-to-Black per capita wealth ratio was 56:1, translating to the average Black American owning less than 2 cents to the dollar of every white American. Legal prevention of enslaved peoples to accumulate wealth exacerbated this gap and continues to severely constrain the ability to close it, she said.

Contrarily, in opening up the possibility for Black Americans to possess and bequeath capital, “emancipation was the single biggest closer of the racial wealth gap.” Policies enacted afterward, however, did not go far enough to continue to resolve this disparity, according to Derenoncourt.

“One major thing that was lacking was any sort of reparations or provision of some form of capital to the formerly enslaved,” she said. “W.E.B. DuBois called this a reckless experiment in emancipation, one that you’ve never seen in the history of humanity–to emancipate a people, but not provide them with any means for providing for themselves while the other group has had the opportunity to accumulate wealth and pass that wealth on to future generations.”

“… I like to regard Juneteenth as not just a day off, but it’s a freedom day,” Bernard said. “A financial freedom day, where it’s an opportunity to learn a little bit more about things that you need to gain the equality that we’re supposedly entitled to.”