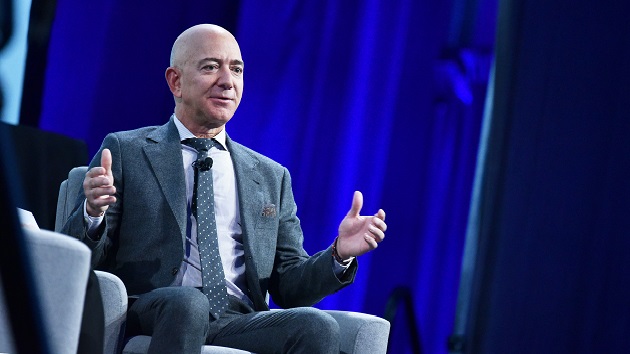 After teasing the announcement over the past week, the company said Wednesday it has opened an online auction for one of six seats aboard the New Shepard, its suborbital vehicle designed for space tourism, for the July 20 flight.

The opportunity to fly above the Karman Line — the internationally recognized line of space, at over 300,000 feet, or 62 miles — presents a new market opportunity, the company said.

“Only 569 people have ever been over the Karman Line,” said Ariane Cornell, Blue Origin’s director of astronaut and orbital sales, said during a press briefing Wednesday. “We’re about to change that dramatically.”

After completing 15 consecutive missions to space and back with New Shepard, the company said it is ready to fly its first civilian passenger from its remote Van Horn, Texas, launch site.

The experience will last between 10 and 12 minutes, during which the capsule will pass the Karman Line and the astronauts will be able to unbuckle their seatbelts and float in zero gravity for about three minutes, Cornell said.

The capsule has “the largest windows that have ever flown in space” and is based on a helicopter model, Cornell said.

The capsule will return to Earth under parachutes.

Other than the winner of the bid, the rest of the flight crew will be handpicked by Blue Origin. Cornell did not share who else will be on the flight.

The online bidding for the civilian seat will be sealed until May 18, after which the bids will become visible. Participants must exceed the highest bid to continue, culminating in a live auction on June 12.

“The winner of this auction, he or she will write him or herself into the history books,” Cornell said. “And on top of that they’re opening the doors for other space explorers to pass through behind them. As far as I’m concerned, it’s a pretty priceless experience.”

The winning bid amount will be donated to Blue Origin’s foundation, Club for the Future, which inspires future generations to pursue careers in STEM.

Cornell did not say how high the company expects the bidding to go or what the prices for seats for future flights might be.

“This is a nascent market,” she said. “We are opening the doors, and we look forward to seeing what the market says.”

To bid, individuals must be at least 18 or the age of majority in their country of residence, be between 5 feet and 6 foot 4 inches tall and weigh between 110 and 223 pounds.

Other requirements include being able to climb seven flights of stairs — the height of the launch tower — in under 90 seconds, being able to fasten or unfasten a seat harness in under 15 seconds, and hear and understand instructions in English. Blue Origin will not evaluate the astronaut’s medical fitness to participate in the flight.

The winner will need to train with Blue Origin at its facilities in Kent, Washington, and Culberson County, Texas, or some other location. The individual must also sign a nondisclosure agreement and waivers of claims, in which the winner waives his or her rights to bring claims against anyone involved in the flight for any losses.