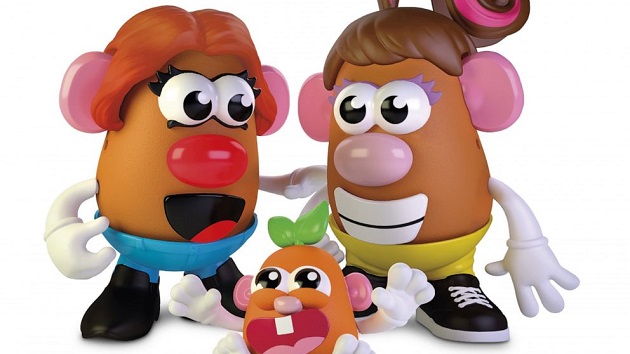 Hasbro announced Thursday that the company is officially dropping the “Mr.” from the Mr. Potato Head brand name, to make sure “all feel welcome in the Potato Head world.”

“The new branding and logo bring a fresh look with a whimsical color palette and will introduce new product, including create your own potato head family, to appeal to the modern consumer,” a spokesperson for the brand said.

Hasbro said it’s “a celebration of the many faces of families, allowing kids to imagine and create their own Potato Head family.”

The new Potato Head family toy launching this fall includes two large potato bodies, one small potato body and 42 accessories. The potato family can have up to two parents, and a baby.

The Gay & Lesbian Alliance Against Defamation responded to the new gender-neutral change after almost 70 years on toy shelves.

“Hasbro’s decision to introduce Potato Head as a gender-neutral toy is the latest move in a larger movement towards greater diversity and inclusion in toys and media aimed at kids,” Rich Ferraro, GLAAD’s chief communications officer, said in a statement. “By offering a toy that exists outside of the binary of male and female, Hasbro is helping kids to simply see toys as toys, which encourages them to be their authentic selves outside of the pressures of traditional gender norms.”