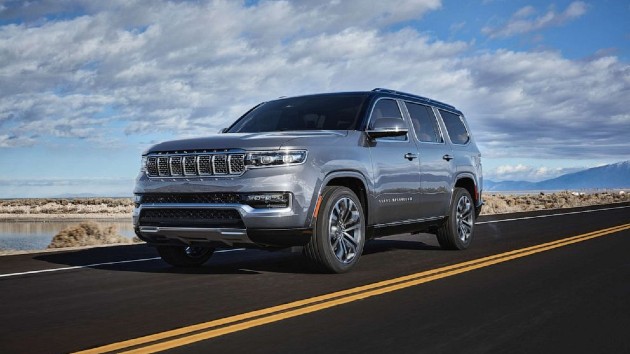 (NEW YORK) — Watch out Chevy Tahoe and Range Rover. There are two new challengers in town.

Stellantis revealed the all-new 2022 Wagoneer and Grand Wagoneer on Thursday, marking the official return of these oversized, four-wheel-drive sport utility vehicles for the first time since 1991.

The world’s fourth-largest automaker said the SUVs would be immediately available to preorder on Wagoneer.com. Assembly will take place at Stellantis’ Warren, Michigan, truck plant and the vehicles will be available in U.S. dealerships in the second half of 2021. The Wagoneer nameplate will become a portfolio of vehicles and a premium extension of the Jeep brand, the company said.

“We’ve been out of the market for more than 30 years after basically inventing the premium American SUV,” according to Christian Meunier, Jeep brand chief executive officer. “It took a while because the company was determined to do it right.”

The Wagoneer and Grand Wagoneer will fill a void in the market that consumers have been demanding, said Jim Morrison, vice president of Jeep Brand North America.

“We listened to our customers. They asked us to bring it back,” Morrison told ABC News. “We are delivering to the marketplace what our competition hasn’t done.”

He added, “These vehicles are designed to work hard and play hard. They’re a nice, natural extension of Jeep.”

The Wagoneer, widely regarded as the precursor to today’s modern SUVs, was the first four-wheel-drive vehicle mated to an automatic transmission when it debuted in 1962 for the 1963 model year. The Grand Wagoneer arrived in 1984 and offered leather upholstery, power windows, air conditioning, AM/FM/CB stereo radios and wood-grain exterior trim as standard features — an industry first.

The Grand Wagoneer was a sales success, attracting well-heeled, affluent weekenders who were willing to pay for upscale and plush interiors. Lagging sales, increasing choices and federal safety standards eventually forced Chrysler Corporation to stop production of the Grand Wagoneer, once the flagship of the Jeep line.

“It went away because it was hopelessly outdated,” Ed Kim, vice president at market research firm AutoPacific, told ABC News. “The Wagoneer was an ancient body style and considered deeply uncool in the early 1990s.”

“These large SUVs are extremely versatile — that’s one reason why they’re so popular,” he said.

Plus, “Jeep is one of the strongest and most aspirational brands in the business. Everyone wants a Jeep,” Kim explained.

Massive SUVs have long been dependable cash cows for automakers. Their appeal as off-roading warriors with spacious seating, luxurious cabins and enviable towing capability has persuaded Americans to give up their smaller, more fuel-efficient vehicles.

The Wagoneer was in demand even before the formal unveiling. Older Wagoneers fetch “crazy” prices on online auction sites, according to Tyson Jominy, vice president of data and analytics at J.D. Power.

“Wealthy consumers want to get their hands on classic SUVs and there is strong brand recognition for the Wagoneer,” he said.

Rory Carroll, editor-in-chief of Jalopnik, argued that retiring the “iconic” Wagoneer was a misstep by Chrysler.

“I don’t know why it’s taken this long to bring it back,” he told ABC News. “Not having a big, three-row SUV was a huge hole in Jeep’s lineup.”

He added, “Wagoneer is a hugely important nameplate. It’s arguably one of the best-looking and most-influential SUV designs of all time. It absolutely makes sense for Jeep to do this.”

Morrison said the Wagoneer, with a base price of $57,995, and the Grand Wagoneer, starting price $86,995, are marketed at different customers and will compete in separate categories.

Morrison pointed to the Wagoneer’s best-in-class second- and third-row legroom and refined on-road handling and driving dynamics. Eight passengers can fit comfortably inside and up to 75 inches of total screen display is available in the Grand Wagoneer.

The new models also pay homage to the vehicle’s original silhouette with a clean roofline and an A-line that runs all the way around the vehicle. The Wagoneer’s designers also chose to incorporate Jeep’s legendary seven-slot grille.

“We’re connecting with the lifestyle-oriented customer,” Morrison said. “The vehicle will build a reputation for itself quickly.”

Last October, General Motors’ GMC division unveiled the reborn 2022 Hummer EV, a massive “supertruck” that delivers 1,000 hp and 11,500 lb.-ft of torque. GM, along with Ford, Jaguar, Bentley and Volvo, are shifting away from gas-powered vehicles to electrics, an industry trend that is rapidly accelerating. Morrison hinted that an all-electric Wagoneer was in the works, saying “different variants” were planned.

Relaunching the Wagoneer with a powerful V8 engine was the right call, according to Carroll.

“This won’t be the last round of gas-powered cars coming to market,” he said. “The Hummer EV will be a huge bellwether for GM. No one is ready to stake their business tomorrow on EVs unless there is consumer demand.”

The decades-long absence of the Wagoneer won’t matter to motorists eager to be seen in the latest, hefty SUV. Last year, SUVs accounted for 54% of the U.S. vehicle market, according to Jominy, and that percentage will continue to creep upward.

“The market for three-row utilities is exploding,” Jominy said. “Right now consumers can’t get enough of them.”

Even the Wagoneer’s steep suggested retail price, which tops out at $110,000, cannot deter interested buyers.

“Cars are really expensive now. Consumers need a vehicle that can do it all,” said Jominy.