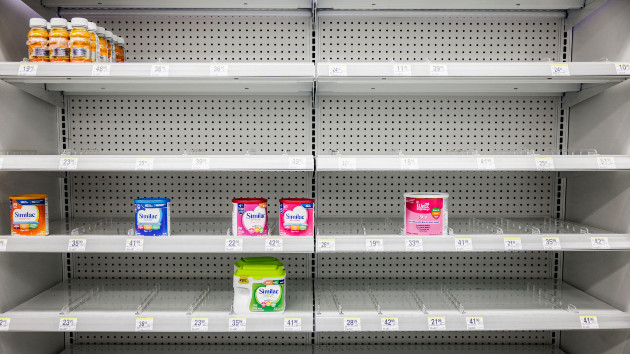 (NEW YORK) — A baby formula shortage has escalated in recent months from a product recall to a national crisis, prompting emergency responses from business leaders and White House officials.

As of early May, 43% of U.S. baby formula was out of stock, according to the data firm Datasembly.

To help make up for the shortfall, the Biden administration on Sunday began flying in tens of thousands of pounds of baby formula from abroad in what it calls “Operation Fly Formula.” A day before, an apology in a Washington Post op-ed was issued by Robert Ford, the CEO of Abbott Nutrition, the nation’s largest baby formula producer.

The emergency has come on the heels of the voluntary shutdown in February of an Abbott factory in Sturgis, Michigan, where the company produces major brands of powdered formula like Similac and EleCare. The shutdown went into effect when four babies fell sick from bacterial disease after ingesting formula produced at the facility and two of the infants died. It remains unclear whether the bacteria that made the children ill came from the baby formula produced at the Michigan factory, but a Food and Drug Administration inspection of the facility found it fell short of adequate sanitation.

“The scenario where you have a manufacturing problem that occurred at an Abbott facility in Michigan, those kinds of things happen all the time,” Nada Sanders, a professor of supply chain management at Northeastern University’s D’Amore-McKim School of Business, told ABC News. “Ultimately, we have very, very weak supply chains.”

Many families rely on baby formula for some portion of sustenance early in a child’s life. Almost 20% of babies consume infant formula before they reach two days of age, the Centers for Disease Control and Prevention said in a 2020 report. More than half of infants receive supplementary nutrition in addition to breastfeeding over their first three months, the report said. Some babies require formula to meet specific nutritional needs.

As with a host of products — from computer chips to lumber — the pandemic has snarled the supply chain for baby formula. Shortages of labor and raw materials have slowed production and hampered distribution, Sanders said. The disruption weakens the supply chain’s responsiveness to the sudden ups and downs of customer demand, she added.

“All of this is ultimately related to the COVID pandemic, and really two-and-a-half years of supply chain disruptions and backlogs of every kind possible,” Sanders said.

Even amid the widespread supply chain disruptions brought about by the coronavirus, few products have faced the crisis-level shortages observed with baby formula in recent weeks, said Sanders and Scott Lincicome, an economist at the libertarian think tank Cato Institute.

One reason why the baby formula market has proven especially susceptible to shortages is the trade barriers and public health regulations that prevent major inflow of the products from abroad, Lincicome said. The U.S. imposes steep tariffs on baby formula. Plus, the FDA requires foreign manufacturers to abide by nutritional and labeling requirements.

In turn, 98% of baby formula consumed in the U.S. is produced domestically. When the Abbott factory shut down, the market lacked an international supply to fill the gap. Last week, the FDA announced “increased flexibilities” for the importation of baby formula in an effort to alleviate the shortage.

But the supply problems aren’t confined to overseas producers, Sanders and Lincicome said. They pointed to a key problem that hinders the responsiveness of the domestic baby formula industry: business concentration. Abbott, the top producer, accounts for about 48% of the U.S. formula market. In all, four companies — Abbott, Nestle USA, Perrigo and Mead Johnson Nutrition — control roughly 90% of the market.

Some critics, including Lincicome, have attributed the small number of market players largely to a federal nutrition program for women, infants and children, known as WIC, which helps low-income families purchase baby formula. Roughly half of the baby formula bought in the U.S. goes through WIC, with about 1.2 million infants getting ahold of formula through the program. That scale grants WIC considerable power in the marketplace, Lincicome said.

WIC uses a system in which each state chooses a single company to be the sole provider of baby formula for all residents enrolled in the program. That approach reduces the price that WIC pays for baby formula, cutting the cost for taxpayers, Lincicome said. But the large size of each statewide contract prevents small companies from winning a bid and gaining a foothold, he added.

In response to the crisis, President Joe Biden signed a measure on Saturday that allows families enrolled in WIC to buy formula beyond what the program normally allows in emergency situations.

“Combine the trade wall with domestic concentration,” Lincicome said. “You have a situation where you end up having a few players in a closed market and when one of those players goes down, the other handful of players left can’t fill the gaps.”

He added: “And you lack access to global markets which might be able to fill that gap in the short term.”

Last week, Abbott and the FDA reached an agreement for the company to reopen the Michigan factory, which should eventually return U.S. baby formula supply back to normal, Sanders said. She predicted it would take three months to fully alleviate the shortage; Lincicome estimated eight weeks.

“Hopefully Abbott will be able to get their production out and get everything smoothly running and what’s taken by customers is replenished at the right cadence,” Sanders said. “Meaning no bumps.”