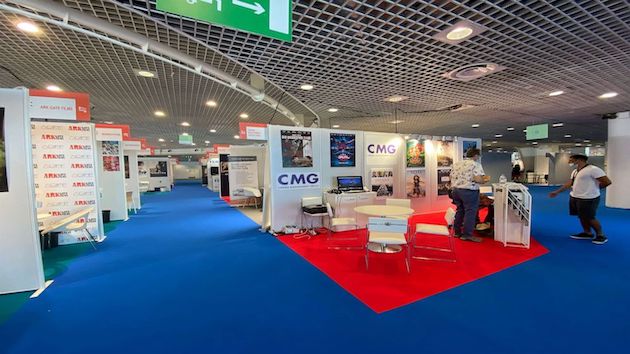 (CANNES, France) — It was almost a strange sight; packed movie premieres and actors again walking the red carpet at the Cannes Film Festival — maskless- — while throngs of photographers snapped away.

With going to the movies put on hold for more than a year, and the festival canceled last year due to the pandemic, even some of the stars were struck by what felt like a return to normal.

“I was a little overwhelmed last night, and I’m really glad that we’re here this year. Because I think we’ll all look back and remember launching out of COVID — and what a way to do it,” said actor Matt Damon, who teared up after the standing ovation he received at the premiere of his new film, “Stillwater.”

Beyond the glitz and glamour, the Cannes Film Festival is also home to the world’s biggest movie market, the Marché du Film. Set up inside the Palais des Festivals, a convention center behind the main theater where premieres are held, the marché is where thousands of directors, producers, sales agents and distributors from around the world try to get their movies made, bought, sold or distributed.

“The Marché du Film is really the business of film, we’re the less sexy and exciting part of the film festival,” said Monique White, senior vice president of distribution for California Pictures who’s been coming to Cannes for years.

This year, cinema’s power players were eager to get back to work, hoping the deals struck here will serve as evidence the business of film is also back. The industry took a massive hit during the pandemic — global theatrical revenue in the U.S. fell from $42.3 billion in 2019 to just $12 billion in 2020, according to the Motion Picture Association’s Annual Report — leaving film professionals scrambling to adjust.

“COVID-19 has forced more change on the film industry — from production and financing through distribution and exhibition — in 12 months than the business had seen in the previous decade,” wrote The Hollywood Reporter’s Europe bureau chief, Scott Roxborough.

Some argue perhaps the single biggest change was the streaming boom.

“COVID changed the way we watch anything now. Whether we’re watching on just the internet, on Facebook, Instagram, Netflix, Hulu, whatever. We have more eyeballs on our computers and our phones,” said White.

While tensions between traditional theaters and streaming platforms had been growing for a while, the problem really came to a head during the pandemic, with the controversial online release of Universal Pictures’ “Trolls World Tour” movie in April 2020 marking the beginning of a new era and sending shockwaves through Hollywood.

“There used to be more of a professional understanding that you would wait a period of time before you released,” said White. “But now it’s really subject to the production and the producer and how they want to release the film domestically.”

The feud between Universal and AMC was eventually resolved, but a number of other studios have since then followed suit. Disney, the parent company of ABC News, decided to release films like “Mulan” and “Luca” online, and WarnerMedia announced the company would release all of its 2021 films on HBO Max the same day they hit theaters.

The shift to digital has even prompted the Oscars to change their eligibility rules — whereas movies first had to be released in theaters to qualify for the awards competition, the Academy is now allowing movies released online to participate.

As a result, “Nomadland” which was released on Hulu, eventually won best picture, and Netflix won seven awards and 35 nominations, the most of any studio this year.

Recently announced Emmy nominations are reflecting a similar pattern with streaming services winning more nominations in 2021 than those of broadcast and cable combined.

The Cannes Film Festival, for its part, is maintaining requirements that a movie must first air in theaters to be able to qualify.

“Of course, the streaming companies exploded and they needed lot more product which is great because now they’re asking for more,” said Hernan Aguilar, a distributor focused on the Latin American market.

Aguilar said he sees an upside to the shift to streaming.

“In general it’s good this thing is happening, because cause more product is being asked for,” he said. “The demand is going up, so in that sense, that’s good.”

The change is causing a certain uneasiness in the industry, with some fearing streaming services could not only put theaters at risk, but also the likes of producers and distributors. A number of streaming platforms are now producing their own content, instead of buying films made by independent filmmakers.

It’s an issue that’s top of mind in Cannes this year.

“Cinema and screening platforms can coexist. At one time, there was a thinking that TV was going to kill cinema. This stuff is not new. It’s all cycle,” said director Spike Lee, president of the Cannes Film Festival jury this year.

White predicts streaming services will eventually have to raise their prices.

“They’re all gonna go up. And before you know it, let’s say in the next couple of years, it’s gonna be like 20 bucks for Netflix, I’m sure. That’s not gonna be sustainable,” she said.

Aguilar thinks it’ll be the opposite.

“I think what’s gonna happen is there’s going to be more and more streaming platforms and with competition the prices will go down but I think it’s really not expensive at all right now compared to tickets in the cinema,” he said.

Another big question: will streaming change the type of content that’s being produced?

“Streaming is definitely … if you see the quality of the content you’re seeing, you’re seeing more lower quality in terms of the story or how things are done,” said Juan Pablo Cadaveira, producer and co-founder of Blue Productions.

It’s unclear what will happen next, but some are hopeful the end of the pandemic will mean a return to theaters, pointing out it was the Great Depression that inspired Hollywood’s Golden Age.

“I just think now though hopefully with things opening up, we’re gonna be less on [streaming platforms] than we were before. No one wants to be in a small apartment. They want to go out and see people and go to the movies,” said White.

Why Walmart entered the streaming wars