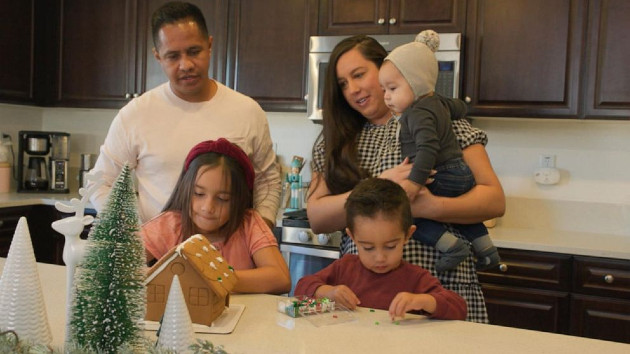 (NEW YORK) — As families across the country celebrate this holiday season, some parents are choosing to create new traditions around gift-giving, including forgoing gifts.

For Gabrielle and Carlos Flores, that means not giving any toys to their three young children for Christmas.

“It’s more about the giving aspect of everything and not just the presents,” Gabrielle Flores told ABC News’ Good Morning America. “Let’s build a tradition so when, God forbid we’re not here, they will go and keep these traditions to their kids.”

Gabrielle Flores, of California, went viral when she shared her family’s Christmas plan on Tiktok, writing in a video that she told her children’s grandparents to only give them socks, books and education items for Christmas.

Describing her children’s reaction to knowing there will not be any toys under the Christmas tree this year, Flores said, “I really think they’re learning that Christmas is more of a holiday season about family, about traditions.”

The #NoGiftsChristmas trend is growing on social media and some celebrities, like Drew Barrymore, have said they’re forgoing buying things for their children and opting in for giving experiences.

For other parents, changing Christmas traditions come from not just a desire to help teach their children about materialism but also about protecting the environment.

ABC News chief meteorologist Ginger Zee is no stranger to taking a sustainable approach to shopping, including pledging to not buy any new clothes this year.

This Christmas, she is bringing that approach to gift-giving as a parent.

Zee said she has purchased only secondhand items for her two sons, 7-year-old Adrian and 4-year-old Miles.

“Here’s what I learned about doing secondhand gifts … they don’t have to not be new,” Zee said, pointing to a Nerf toy she plans to give her sons. “It’s probably like years old, but [they] never used it.”

How to explain different types of gift-giving to kids

Liesel B. Clark is the co-founder of the Buy Nothing Project, an online platform that establishes “gift economies” in local communities, allowing members to “gift” free reused or secondhand items to other members, a process known as “freecyling.”

She said that when it comes to secondhand gifts, children often don’t know the difference between something newly bought and something used — it is all new and exciting to them.

“If it’s new to them, they’re generally just as happy,” Clark told GMA. “There are so many families that are letting go of toys and items that their kids have outgrown, and so then that’s a wonderful way to acquire toys that are age-appropriate for your children.”

Ericka Souter, a parenting expert and author of How to Have a Kid and a Life, said there are both pros and cons to changing gift traditions at Christmas.

“Experiences foster more gratitude,” she said of the approach taken by the Flores family and others to gift only experiences. “The memories of an experience live on much longer.”

Souter continued, “Going giftless can have its drawbacks. Your kids may feel cheated out of a really fun holiday. This can be a really tough change for kids to accept.”

Souter said she recommends parents talk with their children ahead of time instead of surprising them with a change on Christmas morning.

“You want to sit them down and have a discussion with them and tell them why you are doing this,” Souter said. “But not only that, you want to tell them how this will work. So it may be that in the morning, instead of opening up a bunch of gifts, they’re going to open up the small box that will reveal what the experiences will be. Or maybe it’ll be that you all discuss a bunch of options, and then you get to pick which one goes first or what you guys do together.”

She continued, “You want to make sure that you still create some sense of mystery and excitement around going giftless.”

Souter said it’s also important to be transparent with relatives and loved ones who may want to give gifts as well.

“If you have grandparents or aunts and uncles who love sending the kids gifts, you really want to let them know the plan,” she said. “Get them on board and also give them parameters about what kinds of experiences they are supposed to give the kids.”

What buying less means for the environment

From Thanksgiving to New Year’s, the average household waste increases by more than 25%, which amounts to around 1 million extra pounds per week, according to Stanford University’s Waste Reduction, Recycling, Composting and Solid Waste Program.

According to a recent report, 5.8 billion tons of returned merchandise ends up in landfills each year and shipping returns back to retailers emit 16 million metric tons of carbon dioxide.

Clark, of the Buy Nothing Project, said that by “shopping” in your local community, you not only eliminate the waste of throwing out used items, but you also eliminate the need for packaging, wrapping paper and plastic wrap that inevitably ends up in landfills.

Clark said each year, for example, she makes multicolored, pillar candles using materials from her neighbors.

“I just ask them for their half-burned candles,” she said. “So that’s literally taking someone’s ‘waste,’ and turning it into something really beautiful that can be reused.”

Tips for parents to gift responsibly

She shared some tips for finding the perfect gift, without costing the environment.

Lynch said a lot starts by shifting the mindset around gift-gifting from feeling like an obligatory surprise to valuing a person’s needs and interests.

Lynch said asking what someone wants will reduce the chance of a return.

“Santa wants to know two things. Were you a good boy or girl this year? And what do you want for Christmas?” Lynch said. “Santa’s goal is not to surprise, it is to delight.”

Lastly, Lynch said it’s important to take ownership of how, why and what you buy. She emphasized the danger of thinking of things as “disposable,” even when giving holiday gifts.