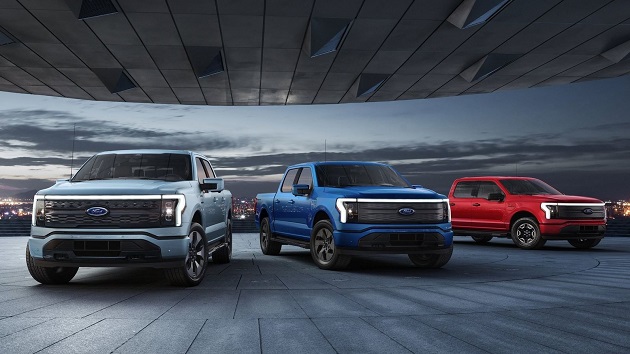 (NEW YORK) — America’s best-selling pickup will soon be available as an EV, but it’s expected to enter a crowded field when it goes on sale next spring.

On Wednesday night, Ford pulled the wraps off the F-150 “Lightning,” an all-electric version of the brand’s F-150 pickup truck. Instead of a gasoline or diesel engine, the Lighting uses two electric motors mounted to the front and rear axles. Ford says the setup allows for all-wheel drive, a targeted 563 horsepower, 775 pounds-feet of torque, and the ability to act as a generator – feeding power to a campsite, tailgate party, or even a house.

“In a way, this is an inflection point for the company. But not only that- I view it also as a tipping point for EV adoption for the industry,” Linda Zhang, the truck’s chief engineer, tells ABC Audio.

Ford’s F-Series pickup trucks, which also include the larger F-250 and F-350, have been the best selling vehicles in the United States since 1982, according to manufacturer sales data, outpacing competitors like the Chevy Silverado and Ram 1500, as well as smaller vehicles like the Toyota Camry and Honda Civic.

He says that makes the launch of the Lightning a high-stakes moment for Ford.

Zhang says Ford is targeting a younger demographic with the Lightning, particularly “folks that are a bit more millennial, and a bit more tech-forward.”

Ford says it plans to have the Lightning in dealerships by next spring. Competitors GMC and Rivian say they’ll have electric trucks on sale by the end of 2021.

“Of those three trucks – the Ford is the one designed to be sold to the masses,” says Kirchner.

Tesla’s “Cybertruck” was originally planned to go into production by the end of this year, but that was announced before the coronavirus pandemic tied up manufacturer supply chains. Plus, says Kirchner, Tesla CEO Elon Musk hasn’t always delivered on his production timelines.

“Elon usually makes production. But he doesn’t typically make the production deadlines he sets for himself.” says Kirchner, adding, “I don’t know when that truck is going to come out.”

Kirchner notes that while many players are vying for EV pickup truck supremacy, the Lightning announcement is one of the biggest steps yet toward a more electrified car market.

“It’s going to be interesting how the general public takes it and how many they actually sell,” he says. “But this is my first indication for real that electric vehicles are going to be a thing in this country.”

The new truck got positive marks from President Biden on Tuesday when he got behind the wheel of a heavily disguised prototype.

“This sucker is quick,” said Biden during a visit to a Ford testing facility in Dearborn, Michigan.

When asked if he would buy one, the president replied, “I would.”