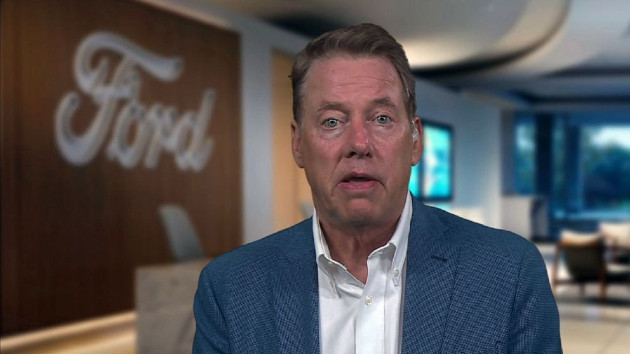 (NEW YORK) — The road toward an all-electric vehicle future is long and filled with roadblocks concerning high costs and supply chain issues, according to automakers and motor vehicle experts.

However, the head of one of the world’s leading automakers said that motorists are hungry to shift into that new era.

Bill Ford, the chairman of the Ford Motor Company, spoke to ABC’s GMA 3 Tuesday about his company’s push into an all EV fleet. Ford touted that its electric offerings, such as the Mustang Mach-E and F-150 Lightning pickup truck, have been sold out.

“We are really betting the company,” he told GMA 3. “I’m so excited by the response that we’ve had to it.”

Still, experts contend that the roadmap to a complete EV adoption has its roadblocks. Supply chain issues have made it harder for vehicle companies to produce the components for the vehicles as fast as other cars, motor vehicle experts said.

The nation’s budding charging infrastructure has left many communities, including those in rural areas, without any option to power an EV.

Ford said the company has been working its way through it, and insisted that the market for EVs would be stronger.

He noted that EVs have fewer moving parts than their gas-powered counterparts and that helps to lower the maintenance costs for customers.

Ford also talked about the concerns that some motorists have about the cost of powering EVs. While the vehicles can plug into a standard outlet, they can charge faster using an in home EV charging kit which can cost thousands of dollars to purchase and install.

President Joe Biden has touted EV infrastructure investments, including an expansion of the nation’s public charging grid, as part of his agenda and has pushed automakers to increase their EV output.

Last year he took a test drive in a F150 Lightning, flooring the truck in front of reporters.

“This sucker is quick,” Biden said.