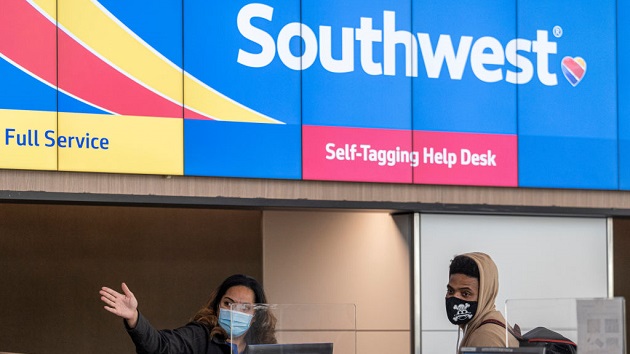 (NEW YORK) — Southwest flight attendants are “outraged” after the airline announced on Thursday that it is planning to resume on-board alcohol sales in two weeks.

The airline had postponed the return of alcohol sales in late May citing the uptick in unruly passenger incidents.

The decision to pause alcohol sales came less than a week after a Southwest flight attendant got her two front teeth knocked out by an unruly passenger on a flight from Sacramento to San Diego.

“It tops the chart of the most egregious things I’ve ever heard of,” Lyn Montgomery, a spokesperson for the union that represents Southwest flight attendants, told ABC News at the time. “It’s unbelievable and really hard to understand the level of aggression that has been exhibited towards our flight crews.”

Montgomery said that many flight attendants felt “leery about beginning to sell alcohol onboard the aircraft again because alcohol always intensifies an event.”

The uinion says it still feels it is too soon to begin serving alcohol again eight months later.

“TWU Local 556 is outraged at Southwest Airlines’ resumption of alcohol sales, a move we consider to be both unsafe and irresponsible,” Montgomery said in a statement. “We have adamantly and unequivocally informed management that resuming sales of alcohol while the mask mandate is in place has the great potential to increase customer non-compliance and misconduct issues.”

The Federal Aviation Administration has seen a record spike in unruly behavior on board since the start of 2021. The agency’s investigations into the surge in aggressive behavior on-board has shown that alcohol is often a contributing factor.

In July, the FAA urged airport bars and restaurants to stop serving alcoholic drinks to go.

American Airlines is now the only major U.S. airline that is still holding out on resuming alcohol sales.

“We haven’t established a specific date for the return of onboard alcohol in the main cabin of our aircrafts,” an American spokesperson told ABC News. “We will continue to evaluate the situation and work closely with the union that represents our flight attendants, the Association of Professional Flight Attendants, and medical experts on this process to determine when we will return to full service in the main cabin.”

In an effort to prevent more unruly passenger incidents, the FAA has established an information-sharing protocol with the Department of Justice.

A FAA spokesperson confirmed to ABC News in November that the agency had referred 37 of the “most egregious cases” to the FBI out of the 227 unruly passenger cases it had initiated enforcement action on.

Delta CEO Ed Bastian wants the U.S. government to go a step further and place convicted unruly passengers on a no-fly list that would bar them from flying on other airlines.

“This action will help prevent future incidents and serve as a strong symbol of the consequences of not complying with crew member instructions on commercial aircraft,” he wrote.