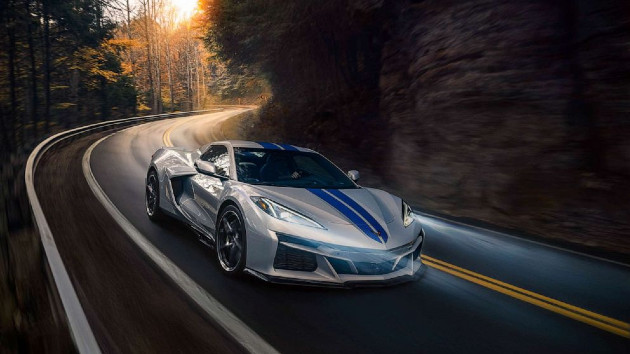 (NEW YORK) — Seventy years and eight generations later, the fabled, mesomorphic Corvette will join the world of electrification with the “E-Ray,” a hybrid sports car that bolts from 0-60 mph in 2.5 seconds, making it the quickest production Corvette in history.

Chevrolet unveiled the new model on Tuesday, 70 years to the day when the Corvette made its world debut on Jan. 17, 1953, at the Waldorf Astoria in midtown Manhattan, New York.

The $104,295 E-Ray, available as a coupe or hardtop convertible, goes into production later this year at the Bowling Green Assembly facility in Kentucky. The car’s naturally aspirated 6.2L LT2 small block V8 engine is paired with an electric motor that produces a combined 655 horsepower and 595 lb-ft of torque. A 1.9 kWh battery pack is located between the seats.

The advanced electrified propulsion and eAWD system — another first for Corvette — deliver intense straight-line performance: the E-Ray posts a quarter-mile sprint of 10.5 seconds.

“You get awesome, breathtaking acceleration and exhilarating performance even in the snow and ice,” Cody Bulkley, vehicle performance integration engineer on the E-Ray, told ABC News. “By adding the all-wheel drive system into the vehicle, it takes the already powerful mid-engine platform to a whole new level, really elevating the vehicle dynamics and what the car can do.”

Corvette’s European competitors are already courting performance die-hards with a growing number of hybrid supercars. The V6 powertrain in the McLaren Artura produces 671 hp and 531 lb-ft of torque and propels the car to 0-60 mph in 2.6 seconds. The Ferrari 296GTB, built with a turbocharged V6 and electric motor, delivers 819 hp. Would Chevrolet swap that mighty V8 for a smaller V6?

“We’re Corvette and we don’t believe in making smaller engines,” Bulkley said. “What makes this car special is that throaty, muscular, LT2 small block engine that’s roaring behind you.”

Corvette product marketing manager Harlan Charles said the E-Ray will not dampen demand for the Stingray model currently on sale. In fact, the E-Ray will likely attract drivers who are in search of a grand tourer-like experience, similar to what Porsche offers in its 911.

“This is a little bit more of a luxury GT version of the Corvette. People still want the performance. You want the Corvette experience, but it’s very comfortable and refined and sophisticated,” Charles told ABC News. “It could be a year-round sports car. More sports car enthusiasts really want to drive their car every day.”

Chevrolet introduced the 670 hp Z06 Corvette ($106,695) in October. A brand spokesperson said production cannot keep up with the record number of orders for the savage, track-focused sports car. Last year 34,510 Corvettes were sold, up 4.4% from 2021.

“These things are flying off the shelf and going above MSRP,” Ivan Drury, senior manager of insights at Edmunds, told ABC News. “Chevrolet knows the demand is there.”

Purists may “cry foul” with Chevrolet’s decision to include AWD, which adds weight to the car, Drury said. Losing the revered V8 engine would have mattered more to loyal customers, he noted.

“There’s something about that V8 rumble … it’s the heart of the vehicle,” he said. “Deviating from that can cause some real backlash.”

“Corvettes are loud and noisy … they’ve always been about the visceral experience,” he told ABC News. “Performance EVs lack all of that drama.”

Kim credited the measured electrification approach General Motors is taking with the Corvette even as the company aggressively pursues electric vehicles. The Detroit automaker has pledged to offer 30 fully electric vehicles globally by the middle of the decade. At least 40% of GM’s U.S. models will be battery powered by the end of 2025, according to the company.

“We know the future is ultimately electric and the E-Ray is a reasonable way to introduce Corvette to electrification,” said Kim. “The bulk of the power still goes to rear wheels but all-wheel drive adds more stability to the front. Increased acceleration and superior handling cement the idea that electrification is good for performance.”

There are six driving modes — tour, sport, track, weather, my mode and Z-mode — as well as “stealth” and shuttle” modes that allow the E-Ray to function 100% as an electric vehicle. In stealth mode, the E-Ray can travel silently for several miles at speeds up to 45 mph before the V8 engine fires up.

“Stealth mode is a pretty neat feature for the Corvette customer. It’s something we’ve been asked about for a long time,” said Bulkley.

Shuttle mode works at speeds under 15 mph and is not intended for public roads, he added.

“So you can just put the E-Ray in shuttle mode to back up, move the car around. Or if you’re going through a garage, it just gives you a nice way to use the electric systems,” Bulkley said.

The E-Ray’s 1.9 kWh battery is charged through regenerative braking and coasting as well as normal driving. Selecting the Charge+ feature also maximizes the battery’s state of charge. The E-Ray is 3.6 inches wider than the Stingray and its “frunk” space is not impacted by the electric motor, which is located over the front axle.

Kim expects the E-Ray will win over Corvette purists who may be more reluctant to accept electrification.

“Because of the level of performance this thing offers — and it’s the first electrified Corvette — this will be one of those cars that sells at crazy markups and have long waitlists,” he said.

Harlan would not say when a fully electric Corvette would be built: “Someday in the future, perhaps.”

E-Ray customers can choose among 14 exterior colors including new hues like “Riptide Blue,” “Cacti” and “Pearl Nickel.” The twisted five-spoke star design on the lightweight alloy wheels is exclusive to the car. Customers have even more interior color, trim and seat choices in the E-Ray.

The car’s torque and thrust from the electric motor and eAWD system were immediate and bracing even on a short jaunt around Manhattan’s packed streets. Bulkley gleefully listed off the car’s capabilities as this reporter buckled up in preparation.

“It’s a thrill to drive,” Bulkley said as he mashed the accelerator.

We returned and the red E-Ray, unbadged before its official debut, sat patiently on West 24th Street. Few, if any New Yorkers, realized they were looking at the future of Corvette.