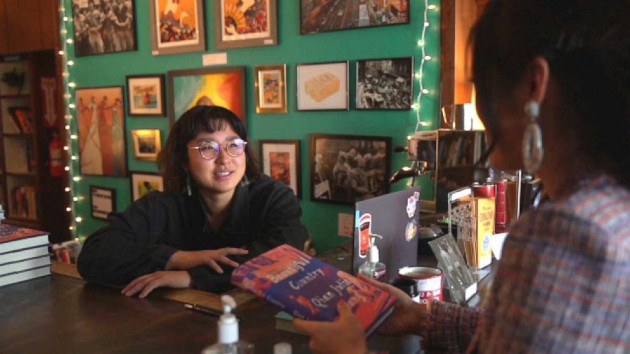 (NEW YORK) — Growing up an only child, Lucy Yu would devour book after book, quickly developing an early love for literature.

At the turn of each page, Yu would immerse herself in different worlds and adventures, and learn the value of empathy with each character. Yu felt the impact of every story and how much each one can change someone’s life.

Her love for books nourished her dream of one day opening a bookstore. After taking a break from her job as a chemical engineer, and, in the meantime, reading several books, she decided to take her life in a new direction — and make history along the way.

“I would walk around the city listening to audiobooks, and then we get to a coffee shop and read a book there like it was all I did, and it was all that brought me joy and calmness,” Yu said. “And it just made me think like … how can I make someone else feel this way? So I … sat down at my desk and I literally Googled ‘how to open up a bookstore.’”

The idea behind Yu’s bookstore was drafted in one night. Less than a year later, in December 2021, Yu and Me Books opened its doors, becoming the first Asian American female-owned bookstore in New York City.

Since opening day, the bookstore has become not only a refuge for the avid reader, but a gathering spot for the AAPI community.

“People have been showing up every single day sharing their stories for me, showing up from places outside of New York and coming here and telling me how important it is for them to see a space like this, for them to see themselves on the shelves,” Yu said.

“It means so much. And I just didn’t realize how much that space was needed. I wanted that space. I was hungry for that space, but I didn’t know that others share that with me,” she continued.

Located in the heart of Chinatown, the bookstore features hundreds of titles highlighting AAPI and immigrant stories. With each book, Yu said she hopes to create an inclusive place where a diverse range of authors are represented and people can see themselves on the shelves.

The stories, she said, also bring visibility to the struggles faced within the AAPI community, especially with the rise of violent attacks against the Asian American community.

“I think that at times we can be seen as one-dimensional, so having a work focus on our perspectives, our stories really add so many layers to the complications of our identity,” Yu said.

Qian Julie Wang, the New York Times best-selling author of Beautiful Country: A Memoir of An Undocumented Childhood, is one of the authors Yu’s shelves harbor. She came to the U.S. at 7 alongside her mother to follow her father after he fled China.

From being surrounded by family and living a comfortable life in China, to being undocumented and going hungry at school, Wang’s reality changed overnight.

“My parents were professors in China, and here, it felt like by virtue of an overnight flight, they worked at sweatshops and sushi processing plants and laundromats and were thrown into the world of physical labor and plucked from their academic offices. So it was very drastic and very immediate,” she told ABC News.

As she adapted to her new life in the U.S., Wang said books were a way for her to escape the rough reality she lived in and connect with other children in her community.

“I found worlds of family and friends who were able to give me love and comfort and make me feel like I belonged just like another American kid,” she said.

Wang, however, realized she couldn’t relate to any of the characters and stories in many of the books she read. While pursuing her dreams in a new country, she said she felt lonely and ashamed of her roots.

“I remember walking down East Broadway with my mother one day after a visit to the library, and I said, ‘I just don’t understand why we’re not anywhere in books or in the media.’ And she said to me then … ‘You can do that. You will put us in the books,’” she said.

Her story and accounts of growing up in Chinatown inspired Wang to write her first book, Beautiful Country, a memoir of her childhood living in poverty. She wrote the book during her hour-long commute to work. Back then, she didn’t think the book would be published.

“I just told myself this book is never going to get published anyway,” Wang said. “No one’s ever going to read it, so you might as well be as absolutely honest as you can be because you’re essentially leaving down notes for your great-grandchildren to discover one day.”

When Wang heard about the opening of Yu and Me Books, she contacted Yu to express her excitement about the bookstore and to plan a signing event as a way to support the new business.

“The very idea that a bookstore would open really at the heart of my childhood, where I felt again so adrift and unseen by books and media, just felt incredibly healing and transformative,” she said.

“Just to have so many Asian Americans coming into that store to be one with them again across the street from where I wandered as a child did feel like a salve for what I so needed as a child,” Wang said.

Chloe Gong also found comfort within Yu’s shelves. Originally from New Zealand, Gong is the best-selling author of These Violent Delights, a book she wrote during her freshman year of college.

“Something like [Yu and Me Books], I wouldn’t have dared to dream about something like [this]. It’s just so amazing to just look around and see like Asian names everywhere,” she said.

“I think about how I would have loved that when I was 13 because I remember it was either those stories that, you know, didn’t necessarily resemble my life. As a reader now, … there’s just so much richness and it’s so great,” Gong said.

As Yu’s dreams grow, so does the bookstore. With plans to expand the shop into different virtual platforms, Yu hopes to connect people beyond the walls of her business and reach communities across the country.

“We don’t just exist in New York, we exist everywhere, and I think being in the story and seeing so many people from different states come and visit, I see how important it is to them,” she said.