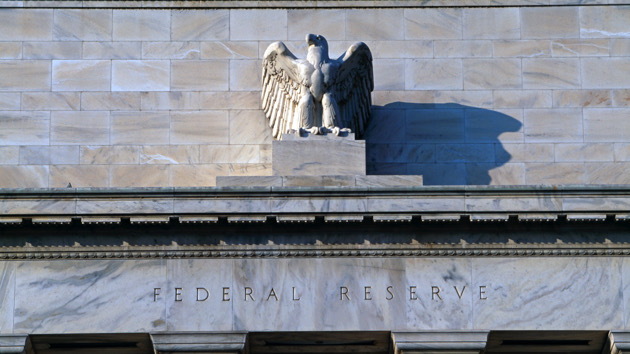 (WASHINGTON) — The Federal Reserve said Wednesday it was raising its short-term borrowing rate another 0.5%, slowing an aggressive series of rate increases while continuing an effort to cool the economy and dial back inflation.

The latest rate hike pulls the Fed back from three consecutive 0.75% increases, signaling confidence that the central bank can bring sky-high inflation down to normal levels.

While interest rate hikes have slowed some areas of the economy, like home sales, the full effects of the borrowing cost increases remain to be seen, Federal Reserve Chair Jerome Powell said Monday after the rate hike.

“The U.S. economy has slowed significantly from last year’s rapid pace,” he said. “It will take time, however, for the full effects of monetary restraint to be realized, especially on inflation.”

“Fifty basis points is still a historically large increase, and we still have some ways to go,” he added. “We will stay the course until the job is done.”

The move raises the short-term borrowing rate to a targeted range of between 4.25% and 4.5%, the highest level in 15 years. Fed projections showed that the central bank will not dial back rate hikes until 2024.

Each of the major stock indices fell nearly 1% on the news.

The move arrives a day after a government report revealed that inflation stood at 7.1% last month compared with a year prior, continuing a monthslong decline from a 40-year record reached over the summer. However, inflation remains at a level more than triple the Fed’s target rate of 2%.

In a statement on Wednesday, the Fed said it expects that additional rate hikes will be necessary to further reduce inflation.

The announcement marks the latest in a string of borrowing cost increases imposed by the Fed in recent months as it tries to slash price increases by slowing the economy and choking off demand. The approach, however, risks tipping the U.S. into a recession and putting millions out of work.

So far, however, the labor market has proven resilient, bolstering the hopes of policymakers seeking to avert a downturn but also raising fears of a prolonged bout of inflation driven by wage gains.

But rising wages often push companies to hike prices to make up for the added costs, which can worsen inflation and make it more difficult to reverse.

Home sales fell for the ninth month in a row in October, the most recent month on record. Sales of existing homes, such as single-family homes and condominiums, were down about 28% from a year earlier.

Meanwhile, the personal savings rate fell to 2.3% last month, the lowest rate in nearly two decades, according to data from the Commerce Department. The failure to stash extra funds suggests that savings stockpiled during the pandemic have strained under the weight of high prices.