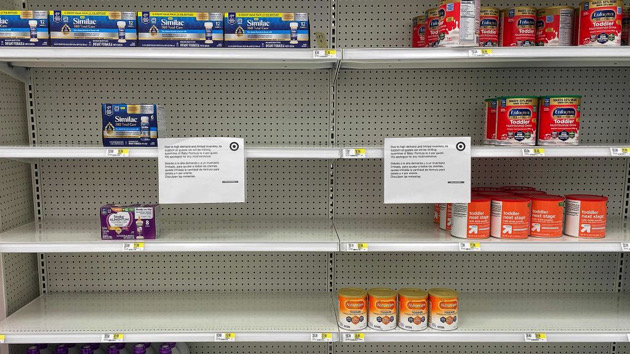 (WASHINGTON) — FDA Commissioner Dr. Robert Califf said the Food and Drug Administration is finalizing a plan to import more baby formula to the U.S. amid a nationwide baby formula shortage.

“We are moving on the product that was intended for other countries,” Califf told Good Morning America Monday. “And I anticipate that by the end of the day today, we’ll have a detailed announcement about how that’s possible.”

“Remember that the instructions need to be in a language that can be understood by mothers and caregivers that are putting the formula together for these infants and also, we have to be able to test the formula to make sure that the 30 required constituents are actually there in the right amounts,” he added.

Federal regulations require baby formula to include 30 nutrients in various amounts, such as vitamins A, D and E, as well as protein and fat.

The makeup of baby formula is crucial since having too many or not enough nutrients can harm a baby and lead to serious health consequences.

Califf warned parents and caregivers not to try making homemade formula as a substitute for formula.

“That’s a very bad idea, because formula, as I said, has 30 constituents and have to be there in the right amount,” the commissioner said. “Ten of which, if they’re there too much, if there’s too much of that constituent, can be dangerous. So formula for infants is a total substitute for breast milk … so we need the infant formula. It’s critical for so many families but it’s got to be the right stuff.”

The FDA is also working closely with domestic baby formula manufacturers, according to Califf.

“We’re working really closely with Abbott and I expect in a very short period of time, we’re gonna have an announcement about the path forward. I think we figured out what to do,” Califf told GMA. “Abbott’s recently indicated that in as short as two weeks, they can be in action and begin to do their part and getting supply back on the shelves. Of course, it takes longer to get in full motion.”

Last week, Abbott, one of the country’s largest baby formula producers, said that pending FDA approval, it would restart their plant in Sturgis, Michigan, a facility that makes many specialized formulas, including EleCare and Alimentum hypoallergenic baby formula products. A recall in February led to the facility’s temporary shutdown after concerns linked the plant to a bacterial outbreak.

On average, nationwide, 40% of baby formula is out of stock and states like South Dakota and Missouri have seen 50% out of stock, according to data firm Datasembly. The crisis has hit families of children with allergies and health conditions more acutely.

Connor has a milk protein allergy and his parents have been searching high and low for the specific baby formula he relies on.

“We’ve been actively looking all the time. Every night, we lay in bed and we’re checking what websites we can find and how much it’s gonna cost,” Dolan told GMA. “People saw it as an opportunity to buy all this formula and, you know, price gouging parents who will pay anything.”