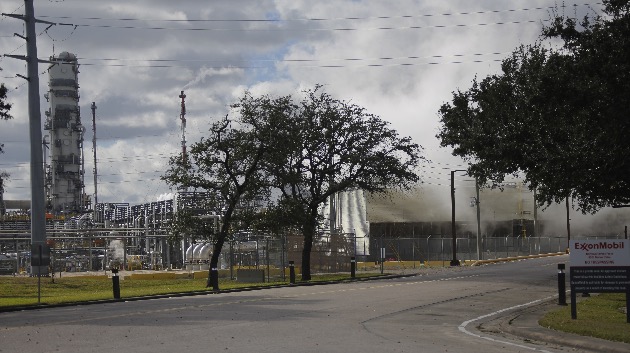 (NEW YORK) — Exxon Mobil Corp. announced on Tuesday an “ambition” to reach net-zero greenhouse gas emissions in its operations in the next three decades, but fell short of making any commitments to offset or reduce the massive amounts of Earth-warming emissions from the fossil fuels that account for the company’s profits.

The net-zero aspirations were outlined in the company’s Advancing Climate Solutions 2022 Progress Report, and builds upon previously announced emission-reduction initiatives.

“ExxonMobil is committed to playing a leading role in the energy transition, and Advancing Climate Solutions articulates our deliberate approach to helping society reach a lower-emissions future,” Darren Woods, Exxon Mobil Corp.’s chairman and chief executive officer, said in a statement. “We are developing comprehensive roadmaps to reduce greenhouse gas emissions from our operated assets around the world, and where we are not the operator, we are working with our partners to achieve similar emission-reduction results.”

As the vast majority of greenhouse gas emissions from the oil and gas industry stem from the consumption of its products, scientists and environmental researchers have slammed the headline-grabbing announcement from the U.S. energy giant as ineffective and insufficient at a time when climate change is already harming communities around the globe.

“ExxonMobil’s emissions reduction pledge misses the mark and is too little, too late,” Kathy Mulvey, accountability campaign director in the Climate and Energy program at the nonprofit Union of Concerned Scientists, told ABC News in a statement. “This commitment solely covers operational emissions, known as scope 1 and 2, which make up only a small portion of the global warming emissions associated with a fossil fuel company’s business.”

“By not making any commitment to reduce the emissions that come from burning oil and gas, known as scope 3, ExxonMobil is shifting blame for the bulk of its emissions onto consumers who are using its products exactly as the company intended,” Mulvey added.

Exxon Mobil, the largest oil company in the U.S., confirmed in a press release Tuesday that “the net-zero aspiration applies to Scope 1 and Scope 2 greenhouse gas emissions.”

“For an oil and gas company, 90% of their emissions are Scope 3,” Donaghy told ABC News. As a result, Donaghy says Exxon Mobil’s net-zero announcement is “obscuring the real issue here.”

“We need to keep our eye on the ball,” Donaghy added. “The climate system, the laws of physics don’t really care about a press release, they care about actual concrete emissions reductions into the atmosphere.”

Donaghy noted that global climate goals, as outlined in the 2015 Paris climate agreement, are to limit warming to 1.5 degrees Celsius above pre-industrial levels.

Since data directly ties the rising average surface temperature on our planet to greenhouse gas emissions from humans, the Paris Agreement called for nations to drastically reduce emissions. In a subsequent calculation, the U.N. Intergovernmental Panel on Climate Change said that in order to keep global warming below the dire 1.5 degrees Celsius benchmark, the world must bring its emissions to “net-zero” levels by 2050.

In the years since the Paris Agreement, scientists told ABC News, policymakers and the private sector have put a dangerous emphasis on the vague “net” part of these “net-zero” commitments — shifting the focus from actually reducing emissions to “offsetting” them with nature and tech-based solutions that simply don’t exist yet at the scale necessary to meet the need.

Moreover, while many of the individual climate goals announced by companies and countries continue to use this “net-zero by 2050 language” as a guide, later U.N. data has indicated that the world is already on track to surpass the carbon budget necessary to limit warming to 1.5 degrees Celsius at around 2030.

As a result, scientists have been sounding the alarm that many of the more recent “net-zero” emissions pledges, especially from businesses, are already coming much too late to be meaningful and in some cases are even becoming a dangerous distraction that lets them continue business as usual.

“To limit global warming to 1.5 degrees, the fossil fuel industry needs to shrink by 2050, and we need to wean ourselves off of using dirty energy and switch away to clean energy,” Donaghy said. “This particular announcement doesn’t really touch on that question, but we know that these oil companies like Exxon Mobil are making investments today, they’re spending money on new extraction and drilling projects that they’re hoping they are going to continue to produce oil and profits for decades to come.”

“The question of whether their business model is consistent with net zero by 2050 is a little more complicated than just our Scope 1 or Scope 2 emissions,” he added, “because the way the oil and gas industry works today isn’t consistent with a stable climate.”

Data indicates that burning fossil fuels — coal, natural gas and petroleum — accounts for an outsized share of greenhouse gas emissions in the U.S.

Fossil fuel combustion for energy accounted for 92% of the total U.S. carbon dioxide emissions and 74% all greenhouse gas emissions in 2019, per the Energy Information Administration. The same agency said that petroleum use in 2020 alone was the source of nearly half (45%) of total U.S. energy-related CO2 emissions and natural gas accounted for 36%.

While Exxon Mobil’s net-zero “ambition” doesn’t go far enough in his eyes, Donaghy said he sees a bright spot in the fact that an oil industry giant is even acknowledging climate realities. He attributes this noticeable shift in part to the climate movement, especially as young activists like Greta Thunberg accuse the fossil fuel industry of robbing her generation of a future.

“I would say it’s a testimony to the climate movement, that’s really made it so there’s nowhere to hide anymore,” Donaghy said. “It’s really just not feasible in 2022 to be a serious person and deny that the climate crisis is upon us.”

“I think it’s a victory that we’re seeing these companies put out even weak statements, that they’re forced to at least pay attention to it,” he said.

Why the stock market slumped and what comes next, according to experts

Companies increasingly using politics in marketing, but there are risks: Experts

US consumers may suffer from Pelosi’s Taiwan trip: Experts