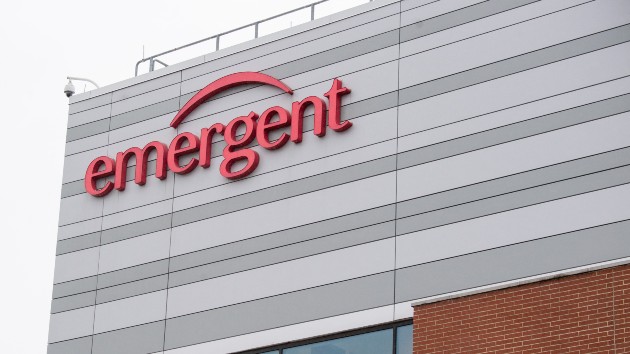 (NEW YORK) — For Emergent BioSolutions, Feb. 8 was a day to revel in their success — at least as far as the public was concerned.

Standing alongside Maryland Gov. Larry Hogan at their Baltimore-area plant, Emergent CEO Robert Kramer boasted about the biotech firm’s role as “one of the key suppliers” helping to produce two promising COVID-19 vaccines, and its “valuable contribution to society in being able to make hundreds of millions of doses available.”

Kramer’s comments that day reflected a confidence that he and other Emergent executives had outwardly conveyed for months — one born of lucrative government contracts and, as a result, generous returns on the horizon for its investors.

What investors say they were not told: Emergent had at that time discarded vaccine ingredients slated for millions of Johnson & Johnson doses due to a string of quality control errors. And that on Feb. 8, nearly six weeks before Emergent’s lab errors became public, Kramer had completed a weeks-long stock transaction that netted him millions of dollars — and that later saved him millions more when the company’s stock tumbled upon news of its failures, securities filings show.

The disconnect between Kramer’s public confidence and the firm’s private woes may have landed Emergent in a crisis of its own making. The company now faces an investor lawsuit, threats of additional class-action suits, a congressional investigation, and calls for the Securities and Exchange Commission to probe Kramer’s stock activities.

“The apparent profiteering by Emergent’s CEO is indicative of a larger problem with the company, which took millions of dollars in taxpayer funds, made big promises about its capabilities — and then utterly failed in the midst of this public health crisis,” Sen. Elizabeth Warren, D-Mass., told ABC News. “This is another example of the Trump administration’s questionable contracting decisions that requires extra scrutiny.”

Since the beginning of the pandemic, lawmakers and legal experts have been sounding alarms about the risk of corporations seeking to improperly profit from the crisis. With massive government contracts signed on remarkably short timelines, critics say the government exposed itself to an environment ripe for abuse.

By the fall of 2020, nine months into the pandemic, federal investigators were reportedly probing Eastman Kodak’s handling of a $765 million loan agreement with the federal government to develop drugs in its domestic factories. The loan was later put on hold following the allegations of wrongdoing.

In an interview with ABC News in August, Sen. Chris Van Hollen, a Maryland Democrat, emphasized that “the Securities and Exchange Commission needs to be on full alert at this moment,” referring to the uptick in government contracts being signed to address the COVID-19 pandemic.

From contract to backlash

It was in June of 2020 that Emergent landed a $628 million contract to boost domestic vaccine manufacturing capabilities, making it one of the federal government’s most important partners in manufacturing vaccines in the U.S.

But the deal has been under public scrutiny since early April, when the company first acknowledged that it discarded a batch of Johnson & Johnson vaccines because they “did not meet specifications and our rigorous quality standards.” The New York Times later reported that Emergent had, since October 2020, thrown out millions of doses’ worth of AstraZeneca’s vaccine as a result of similar issues.

During a shareholder call on Thursday, Kramer took responsibility for the vaccine missteps and sought to reassure shareholders of the firm’s ability to bounce back.

“What’s important now is getting an accurate account of the challenges we face and using the lessons we learned to ensure that Emergent, the government, and our other partners can be best prepared to get us out of this pandemic,” Kramer said.

But the backlash to Emergent’s manufacturing setbacks has been swift. On April 19, the firm was targeted in a lawsuit accusing its leaders of engaging in a “fraudulent scheme to artificially inflate the company’s stock price.” The complaint, filed on behalf of a Florida-based pension fund, claims that Emergent executives deliberately misled investors by overselling the firm’s ability to deliver vaccines.

Emergent has not yet responded in court, but a company spokesperson said the firm “believes this lawsuit is without merit.”

At least three other law firms have separately begun soliciting investors to join a prospective class-action lawsuit against the company. An Emergent spokesperson said these efforts were also without merit.

Outside of the courts, lawmakers have taken notice of public reporting on Emergent. Rep. Carolyn Maloney, D-N.Y., the chairwoman of the House Oversight and Reform Committee, and Rep. James Clyburn, chairman of the Select Subcommittee on the Coronavirus Crisis, launched an investigation into the process by which Emergent won its June 2020 contract. Maloney highlighted the firm’s ties to Dr. Robert Kadlec, who was once paid as a consultant for Emergent and later served in a senior role under President Donald Trump.

“We need to understand what happened,” Maloney told ABC News in an interview. “We need to see if there were any criminal acts. We need to see how this mistake happened, so we can prevent it in the future.”

An Emergent spokesperson said the firm “welcomes the opportunity to answer the committee’s questions” and insisted that “there was no inappropriate leverage or behavior that influenced the contracting process” related to Kadlec. Maloney has invited executives from Emergent, including Kramer, to testify before her committee in May.

The timing of trades

Sen. Warren has trained her sights on the timing of Kramer’s stock transactions. Earlier this week, after the Washington Post first reported on the stock trades, Warren called on the SEC to investigate.

Between Jan. 15 and Feb. 8, Kramer made a series of stock transactions that netted him more than $7.6 million, securities filings show. The moves came just prior to revelations of the firm’s failures, which promptly sent the company’s stock value tumbling. The Washington Post reported that Kramer maintains more than $10 million in company holdings.

An Emergent spokesperson explained that Kramer’s transactions were scheduled in November, long before they were executed — a practice frequently used by corporate executives to avoid suspicion of trading on insider information, which is illegal.

“Our executive team and our board of directors, including Mr. Kramer, are held to the highest ethical standards and follow strict compliance with all laws, regulations, and our internal policies governing financial transactions in Emergent’s securities,” the spokesperson said. “Any insinuation of wrongdoing is without evidence or merit.”

Asked by ABC News whether Kramer was aware that his firm had already begun discarding batches of AstraZeneca’s vaccine when he made the decision in November to shed his stocks, the spokesperson said, “Insinuation of wrongdoing is without evidence or merit.”

“Mr. Kramer’s actions appear to be an egregious example of pandemic profiteering,” Warren wrote in a letter to the SEC. “He personally profited from millions of dollars of taxpayer-funded contracts while the company he led caused critical delays in the COVID-19 response — and he then protected his personal profits by selling his stock at inflated prices before the company disclosed its failures.”

Officials with the SEC did not respond to ABC News’ request for a comment.

If Emergent executives were publicly expressing confidence in their work while privately taking steps that suggested otherwise, critics say it wouldn’t be the first time that happened. In 2016, a group of investors brought a class-action lawsuit accusing executives at the firm, including Kramer, of misleading investors about a forthcoming government contract to develop an anthrax vaccine.

The plaintiffs in the case, which included representatives of two pension funds, accused Emergent executives of inflating the company’s stock price by making public pronouncements about the prospective contract, then selling off a combined $14.5 million in shares ahead of news that the deal called for “70% less than the number of doses investors expected the company to produce,” according to their complaint.

The parties ultimately settled the case. Emergent agreed to pay the investors $6.5 million, but denied all allegations of wrongdoing.

Despite Emergent’s setbacks and the lawsuits and investigations that lie ahead, Kramer told investors Thursday that he remains optimistic about the firm’s ability to secure lucrative contracts in the future.

“We are working in a very transparent way with all factions of the government,” he said. “Those relationships remain intact and strong.”

Would you try a mustard doughnut? French’s teams up with Dough to create a tangy confection

Back-to-school costs are skyrocketing. Here’s how to save with tax-free holidays