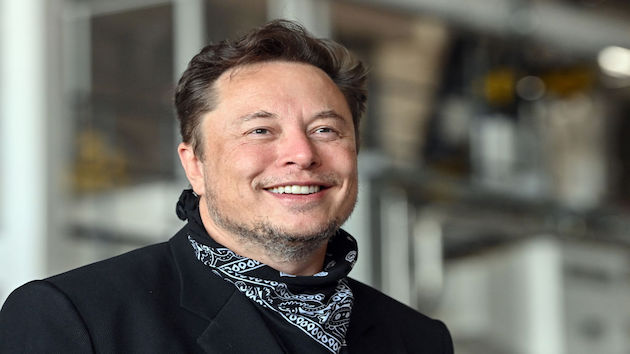 (NEW YORK) — Tesla CEO Elon Musk’s $44 billion bid to purchase Twitter struck an unexpected roadblock early Friday morning when he tweeted that he had put the deal “temporarily on hold,” citing concern over the prevalence of bot and spam accounts on the platform.

Nearly two hours later, Musk assured observers that he remains “committed to acquisition.” But damage had been done. The price of Twitter shares plunged Friday, closing more than 9% down.

Market analysts said the worry over fake accounts could serve as a pretext for Musk to bargain a lower price for the acquisition or abandon the effort altogether. The share prices of both Tesla and Twitter have fallen in the weeks since Musk reached a deal to purchase the social media platform, on April 25, potentially making the acquisition less attractive for Musk.

“I believe he’s still committed in theory, probably at a lower price,” Dan Ives, a managing director of equity research at Wedbush, an investment firm, who closely follows the tech sector, told ABC News. “It starts to be a boy that cried wolf.”

An unpredictable figure, Musk defies an easy assessment of his thinking. But he has expressed concern over fake accounts on previous occasions. On April 21, days before he reached the deal to acquire Twitter, Musk tweeted: “If our twitter bid succeeds, we will defeat the spam bots or die trying!”

There are two main explanations for why Musk could be worried about fake accounts. First, there is the threat they pose to the company’s business model. Second, there is their potential to undermine the credibility of the platform as a site of authentic discourse between real users.

Twitter generates the vast majority of its revenue through advertising to users on the platform, which means its business depends to a significant degree on the number of users who see the ads displayed by the company.

In the first quarter of this year, the company reported 229 million users who accessed Twitter on any given day on a platform on which they could be shown ads, which amounted to a 15.9% increase from the same quarter a year ago. The company reported $1.2 billion in revenue for the first quarter of this year, of which $1.11 billion came from advertising.

If the number of spam or bot accounts on Twitter is larger than the company has estimated, then it could cut into that number of monetizable users and the amount of ad revenue they generate. In turn, that could damage Twitter’s bottom line.

An accurate estimate of the number of fake accounts is important “given that establishing an accurate number of real tweeters is considered to be key to future revenue streams via advertising or paid for subscriptions on the site,” Susannah Streeter, a senior investment and markets analyst at Hargreaves Lansdown, told ABC News in a statement.

In prior comments, Musk has stated another source of worry over bot accounts that centers on how they could undermine the role Twitter plays as a “de facto public town square,” as he has described it. If Twitter posts cannot be trusted as real remarks from actual human beings, then the value of the discourse on the platform deteriorates.

“There is so much potential with Twitter to be the most trusted & broadly inclusive forum in the world!” Musk tweeted on May 3.

“That is why we must clear out bots, spam & scams. Is something actually public opinion or just someone operating 100k fake accounts? Right now, you can’t tell,” he added in a follow-up tweet minutes later.

Public interest in fake accounts on social media platforms intensified in the aftermath of the 2016 presidential election, when it was found that Russian operatives had used false accounts to spread misinformation on a massive scale. In 2018, Twitter escalated its efforts to remove fake or suspicious accounts, suspending more than 70 million such accounts in May and June of that year, the Washington Post reported that July.

For its part, Twitter has acknowledged the challenge of accurately estimating the number of fake accounts on the platform. In the public filing this month in which it stated that fake accounts make up less than 5% of users, Twitter added a note of caution about the figure: “In making this determination, we applied significant judgment, so our estimation of false or spam accounts may not accurately represent the actual number of such accounts, and the actual number of false or spam accounts could be higher than we have estimated.”

Last month, Musk reached a deal to buy Twitter at $54.20 a share, which amounted to a 38% premium above where the share price stood before it was made public that Musk had been purchasing company stock.

The Securities and Exchange Commission is investigating Musk over a delay in notifying regulators of a 9.2% stake in Twitter he took earlier this year, the Wall Street Journal reported Wednesday. Likewise, the Federal Trade Commission is reviewing the acquisition over the possible violation of an antitrust reporting rule.

Ives, the analyst at Wedbush, said the announcement from Musk on Friday puts the outcome of the acquisition in question.

“This continues to be a circus show that really puts the deal in uncertainty,” he said. “The chances of a deal getting done is probably less than 50% now.”