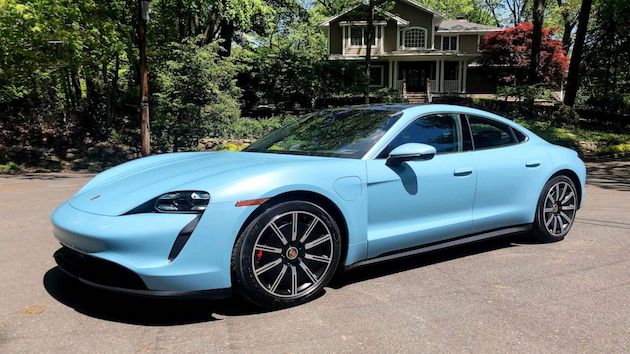 (NEW YORK) — It took years for car enthusiasts to accept that Porsche, maker of the famed 911 sports car, was joining the SUV frenzy.

Now, the 90-year-old Stuttgart automaker has a new challenge to tackle: Getting Porscheophiles on board with its electrification plans. Porsche’s future, like its sports car peers, may depend on it.

Sales of the agile and incredibly fast Taycan sedan, Porsche’s first electric vehicle, are off to a strong start. Deliveries worldwide totaled 9,072 in the first quarter of 2021, just shy of the 9,133 911s that were sold. In the U.S., Taycan sales hit 4,414 in 2020 and 2,008 in Q1. More than a third of customers are trading in competitor vehicles for a Taycan.

The Taycan lineup has quickly expanded since its December 2019 debut; there’s the newly released Taycan Cross Turismo, the brand’s first “Cross Utility Vehicle” (CUV) that closely resembles a station wagon. A less expensive and slightly less powerful Taycan model with rear-wheel-drive has since entered the market along with the Taycan Turbo and Turbo S — two variants that are mind-blowing quick with 0-60 mph times of 3.0 seconds and 2.6 seconds when launch control is activated.

The Taycan had to be “deep in the core of the brand” to attract buyers, according to Kjell Gruner, president and CEO of Porsche Cars North America.

“It needed to be super sporty and look like a Porsche. Low and wide with fenders higher than the hood,” he told ABC News.

Aficionados, though, are concerned Porsche brass will transform the venerated 911, the awe-inducing sports car that devotees religiously worship, into a silent conveyance.

“Cars fill different customer demands. We would not try to convince a customer that says ‘I want a high-revving, manual transmission, naturally aspirated engine’ from something different,” Gruner said. “Some people are not ready yet for BEVs [battery electric vehicles]. Our business model is made to be flexible.”

Porsche has repeatedly assured buyers that the 911 will keep its potent rear engine — for now. The two-door road warrior has become more powerful and fuel efficient with each generation, Gruner noted, though a hybrid powertrain could be coming in the near future.

Mike Guy, editor-in-chief of Road & Track, said enthusiasts “talk a big talk” when it comes to internal combustion engines but will eventually surrender to EVs.

“It makes sense for brands to embrace electrification,” he told ABC News. “From a performance standpoint I think there will be a fully electric Ferrari and 911. If it was up to enthusiasts, the 911 would always be a manual transmission.”

“Any sports car could be successful as an EV,” Guy said. “Having a sports car is about pushing the envelope and having great performance. EVs may be a cultural dividing line among enthusiasts and that’s a good thing.”

“Our cars are tuned for our customers. They’re quite distinct,” Mostafaei told ABC News. “[The e-tron GT] is for someone who is more interested in Audi’s comfort and design. This is an Audi through and through.”

Production of the e-tron GT has started, with U.S. customer deliveries slated for the summer. Mostafaei said there have been “a ton” of pre-orders for the GT, adding that the RS trim produces up to 637 horsepower with overboost and bolts from 0-60 mph in 3.1 seconds — on par with the V10-powered Audi R8 supercar.

“You’re not losing anything by going electric. The e-tron GT is a high-performance car first and foremost,” he said.

Even BMW’s lauded M division has succumbed to the EV tide. The company’s new i4 M50 is the first fully-electric performance model to come from M GmbH and offers 536 hp and a combined torque output of 586 lb-ft.

Eliminating the sensory and sound experience of high-revving sports cars will certainly turn away some customers, according to Tyson Jominy, vice president of data and analytics at J.D. Power.

“Nothing will sound like the gates of hell opening when you light up an Aventador,” he told ABC News. “Sports cars have to adapt or die. Some [automakers] will adapt early to get the potential pain over right away. Some brands will hold out until the very last day. I would prefer to still have these cars exist than not at all.”

There’s also range anxiety, which Gruner acknowledged was critical to wooing customers. The Taycan 4S has an estimated driving range of 227 miles with Performance Battery Plus; the range drops to 199 miles without it. The range on the Taycan Turbo and Turbo S? 212 and 201 miles respectively. The e-tron GT gets an estimated 238 miles of range and 232 miles for the RS trim, Audi says.

“A lot of people are not convinced of battery electric vehicles because they have range anxiety. That certainly needs explanation, some support from our side,” Gruner said.

There are other factors that could dissuade enthusiasts. EVs have limited track potential because of the recharging time. Battery performance can suffer in extreme heat or cold. EVs also weigh more than traditional sports cars.

Jominy said the ultra-fast Tesla Model S Plaid, which reportedly sprints from 0-60 mph in 1.9 seconds and has a top speed of 200 mph, shows that EVs can offer the same level of excitement for drivers.

“An EV’s center of gravity is even lower, handles better and comes off the line faster,” he said. “Die-hard fans will appreciate the attributes of a battery electric vehicle if they get seat time. It’s not all doom and gloom.”

Even Ferrari, the “paragon of purism,” according to Guy, has committed to electrification along with arch Italian rival Lamborghini.

The marque’s chairman, John Elkann, told investors in April that the company’s first EV will arrive in 2025. The Maranello automaker produces one plug-in hybrid sports car — the 986 hp SF90 Stradale — built with a turbo V8 engine, three motors and a high-performance lithium-ion battery. In all-electric mode, the SF90 can travel a reported 16 miles.

Hybrid powertrains are not an entirely new concept for Ferrari; the limited production LaFerrari combined an electric motor with the company’s classic naturally aspirated V12 engine.

Lamborghini has taken a more conservative approach to electrification. It plans to invest $1.5 billion in a hybrid lineup by 2024, a departure from just a few years ago. Maurizio Reggiani, Lamborgini’s chief technical officer, told ABC News in 2019: “Lamborghini will be one of the last ones to join the EV pool. The new generation of [Lamborghinis] will be hybrid. But hybrids are still a big challenge for a super sports car.”

“The entire industry is undergoing a period of change, of transformation,” Winkelmann told ABC News. “The reduction of our carbon footprint is a responsibility for each individual and each company. There is no hiding behind being a super sports car manufacturer. This challenge concerns everyone.”

Lamborghini’s first plug-in hybrid arrives in 2023 and will still feature a V12 combustion engine, he said.

“The use of hybrid powertrains will only enhance the performance and efficiency of our vehicles,” he added. “An all-electric Lamborghini will be designed more as a daily driver with a different use and, thus, different premises for the overall concept. A super sports car of its segment, yes. Yet not a super sports car in the traditional sense.”

The Artura, the latest supercar from British marque McLaren, pairs its all-new twin-turbocharged 3.0-liter V6 engine with an electric motor and battery pack, leading to a combined 671 hp and 531 lb-ft of torque. Like Ferrari, McLaren has a history of hybrid powertrain technology. Its acclaimed P1 supercar was a 903 hp hybrid rocket fitted with a 3.8-liter twin-turbo V8 and electric motor.

The Speedtail — “the fastest McLaren ever” — also utilizes ground-breaking battery technology; its 4.0-liter internal combustion engine and an electric drive unit together develop up to 1,055 hp and maximum torque of 848 lb-ft. McLaren aims to have fully electric models on the road by the end of this decade, executive director Ruth Nic Aoidh told Reuters.

Niche players like Italy’s Pininfarina and Croatia’s Rimac are focusing their EV technologies on enthusiasts who can afford seven-figure hypercars. Pininfarina’s $2.2 million Battista produces an insane 1,900 horses and is faster than a Formula One race car. Rimac’s $2.4 million hypercar, the Nevera, boasts 1,914 hp and 1,740 lb-ft of torque.

These manufacturers won’t have the same difficulties selling EVs as mass market brands do, according to Karl Brauer, executive analyst at iSeeCars.com.

“Anyone can make a lot of noise about an EV and sell a limited production to collectors,” Brauer told ABC News. “Starting to replace your business model with pure EV sports cars — that’s the challenge. Automakers don’t want to move faster than the market.”

He expects Porsche, Ferrari and even Dodge with its SRT Hellcat muscle cars will have the toughest hurdles to overcome as they try to convert longtime fans and detractors to electrics.

“Dodge will have a problem selling a full EV today,” he said. “Porscheophiles will completely dismiss the Taycan. Ferrari will lose a lot of traditional appeal.”

He added, “The trick to countering resistance is performance. If [brands] can create EVs that are quicker than traditional sports cars, it will wear down the stalwarts. But it won’t be easy.”

The full-throated howls of Porsche’s sports cars will always draw in buyers. But enthusiasts would be foolish to ignore the Taycan. Like the 911, it’s one of the “fastest cars on earth,” Gruner declared.