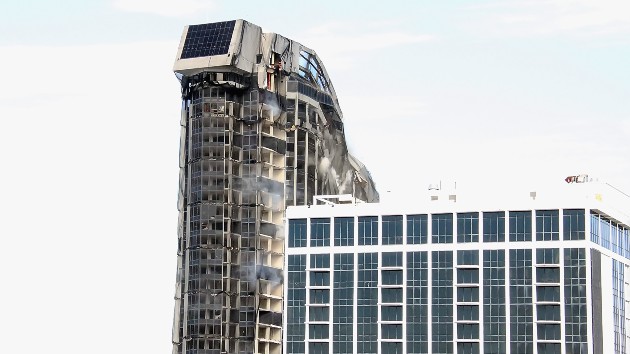 The Trump Plaza casino in Atlantic City was destroyed in a series of explosions at 9 a.m. Wednesday that saw the luxury boardwalk building crumble into a giant cloud of dust in less than 20 seconds.

The once-iconic casino frequented by celebrities, rock stars and athletes, opened its doors in 1984, held several high-profile boxing matches that Trump attended, and touted itself as “Atlantic City’s centerpiece.”

In 2014 it was shut down and the luxury building fell into disrepair, prompting its demolition.

Demolition crews had set up explosives along the building’ structures to knock its legs out from under, bringing the building down on itself.

The casino, for a time, was once the most successful in the city and was featured in the 2001 film Ocean’s Eleven, starring George Clooney and Brad Pitt.

When it closed, Trump Plaza was the poorest-performing casino in Atlantic City.

Atlantic City Mayor Marty Small said the destruction had nothing to do with the former president.

The property is owned by billionaire investor Carl Icahn, a donor and former special economic adviser to Trump, who has not yet announced plans for the site.

Several people attended the implosion and a public viewing area was set up at Bader Field where it cost $10 to park a car to watch. Some hotels with facing views of the Trump Plaza also offered viewing packages of the destruction.

Separately, in Palm Beach, demolition crews at Mar-a-Lago removed a helipad on Tuesday that was constructed during Trump’s presidency in 2017.

The 40-to-50-foot-wide helipad allowed Trump to take Marine One to and from Palm Beach International Airport to Mar-a-Lago, though it wasn’t used often.

Due to his position as president, he received an exemption from Palm Beach’s helicopter-free zone rule, which was revoked following his exit from office, according to the Palm Beach Daily News.

Under that condition, he was allowed to have the helipad as long as it was used for presidential business and was removed when his term ended.

Pyramid Builders of Palm Beach carried out the demolition job, which costs an estimated $15,000, the Palm Beach Daily News reported.