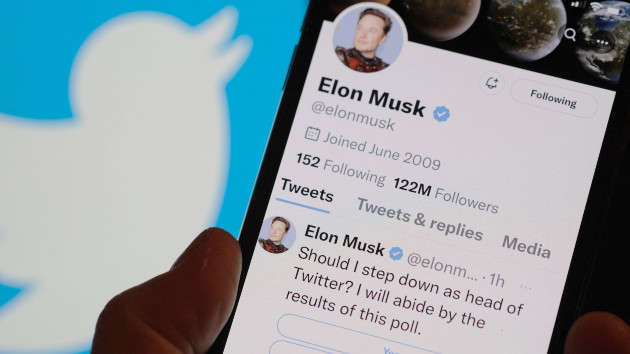 (NEW YORK) — Elon Musk vowed to resign as the head of Twitter but he will remain a dominant force at the company, some management experts told ABC News.

The billionaire entrepreneur, who owns Twitter, said on Tuesday that he will step down as soon as the company identifies a successor. The move follows a Twitter poll in which a majority of users called on Musk to stop leading the company.

However, he will retain control over the software and server departments, important teams that will grant him significant control over how the social media platform operates.

The authority afforded by ownership of the company, as well as Musk’s longstanding reluctance to delegate key tasks, will result in decisions dictated largely by his preferences, the experts said.

The company, which lacks a board of directors, will likely hire a hand-picked successor with views that align closely with Musk’s and a public profile that is vanishingly small by comparison, they added.

“It will be Elon’s impulse to jump in and say, ‘It’s my money at stake, it’s my reputation at stake — I have to be a part of every decision,” Peter Harms, a professor of management at the University of Alabama who has studied corporate leadership, told ABC News.

“He has shown no inclination to delegate authority with his businesses,” Harms added.

Since he acquired Twitter, Musk has made dramatic changes. He fired top executives and cut the company’s 7,500-person workforce in half, while reinstating some formerly suspended accounts such as that belonging to former President Donald Trump.

He also revamped Twitter’s subscription service, Twitter Blue, allowing users to access verification if they pay a monthly fee of $8. The service was suspended after it gave rise to a flood of fake accounts impersonating public figures and brands. It has since been relaunched.

In an interview on Twitter Spaces on Tuesday, Musk defended the moves as part of an aggressive effort to rescue Twitter from financial peril, which he described as an “emergency fire drill.”

“That’s the reason for my actions,” he added. “They may seem sometimes spurious or odd or whatever.”

​​Musk, who admitted he overpaid for the platform at the purchasing price of $44 billion, said last month that the company was losing $4 million a day.

In his latest eye-catching move, Musk posted a poll on the platform asking users whether he should resign. The poll ended Monday morning, with 57.5% of voters saying he should step down and 42.5% saying he shouldn’t.

After a day of silence about the results, Musk announced that he would ultimately step down. By retaining control of key product teams, however, Musk will remain heavily involved in overseeing the company, experts said.

“It feels like window dressing,” Sandra Sucher, a professor of management at Harvard Business School, told ABC News. “He can appear to be responding to the vote to get him out, but I think it’s somewhat disingenuous because he’s going to maintain operational control over a big portion of the business.”

“There’s no question that he will remain the de facto head,” she added. “As far as concerns over decision making and the way he’s shaping the business to reflex his own personal views, it’s unclear what this change will do.”

Growing pressure over losses at Tesla

Musk, who also runs electric vehicle company Tesla, has faced growing pressure to return his focus to the automaker. The company’s stock has fallen 60% this year, as it faces heightened competition and pandemic-induced production challenges.

Musk’s resignation “has become a necessity because of the hemorrhaging at Tesla,” Jeffrey Sonnenfeld, a professor of management at Yale University who convenes gatherings of top CEOs, told ABC News.

While Musk will remain atop Twitter for the foreseeable future, he may end up distancing himself from the company in order to prioritize the comparatively massive automaker, which boasts a market capitalization of nearly $440 billion, Sonnenfeld said.

In fact, Musk tried to avoid taking control of Twitter in the first place. He tried to pull out of the deal to buy the company but went through with the acquisition after Twitter brought a lawsuit forcing the acquisition.

“He became CEO by default because he lost the lawsuit,” said Sonnenfeld, of Yale University. “He didn’t really want to be CEO.”

Despite the need for a steady hand at Tesla, Musk will find it difficult to disengage from day-to-day operations at Twitter, said Harms, of the University of Alabama.

A successor, Harms said, would need to implement Musk’s vision for the company and allow Musk to take credit, leaving little opportunity for dissent.

The current dynamic atop Twitter — a visionary leader in need of a logistics-oriented partner — has come about in the industry on multiple occasions, Harms said, pointing to former Apple CEO Steve Jobs and his then-second-in-command Tim Cook.

In another case, Meta CEO Mark Zuckerberg hired Chief Operating Officer Sheryl Sandberg to handle the company’s advertising business, on which it relies for revenue.