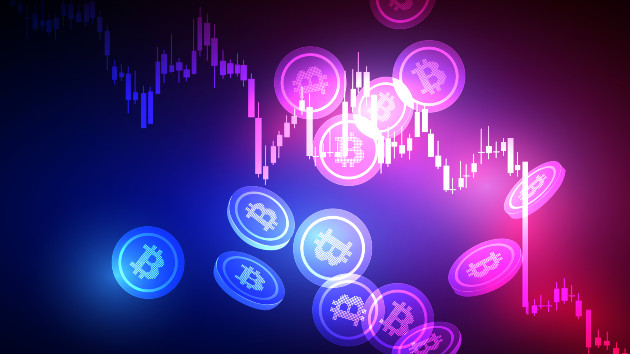 (NEW YORK) — Cryptocurrency has always been volatile, says one economics expert who spoke with ABC News. But 2022 was a stomach-churning, roller-coaster ride for investors and major players in the market.

The prices of popular cryptocurrencies plummeted throughout 2022. Moreover, some cryptocurrency companies and their founders are facing bankruptcy and even the threat of imprisonment.

Here are some of the events that shook the cryptocurrency world to its core in 2022:

Some experts, including David Yermack, a professor of finance at the New York University Stern School of Business, say crypto’s free fall started after investors began selling off digital assets in response to the Federal Reserve’s interest rate hikes. The market took a nosedive after Celsius Network — a former cryptocurrency lending company — announced it was pausing all withdrawals and transfers between accounts in order to “honor, over time, withdrawal obligations.”

A drop in the crypto market in the first half of a year is not unusual, Yermack told ABC News.

“Cryptocurrency has been volatile throughout its history and has experienced a large number of sharp rises and falls,” Yermack told ABC News.

What really affected the market, he said, was the collapse of TerraUSD, a payment platform for so-called stablecoins.

Stablecoins are a form of digital currency backed by another form of currency like the U.S. dollar or a commodity like gold, according to experts who spoke with ABC News. They are designed to be less volatile than other forms of cryptocurrency. But some of the heaviest-traded stablecoins saw a massive drop in value in 2022.

The most notable hit was the collapse of the Luna token and its associated TerraUSD stablecoin, said Yermack.

TerraUSD’s price “fell from $116 in April to a fraction of a penny” and the company had a market cap of over $40 billion, according to an analysis by CNET.

Yermack summed up why this particular collapse contributed to the crypto market’s crash.

The “Luna token and the TerraUSD stablecoin [were] two assets that were promoted by the same issuer and were linked to one another by a trading algorithm. Many people on the Terra platform had taken out loans in the stablecoin and posted the Luna tokens as collateral. When Luna’s value began to drop in the context of the overall market decline, it impaired the collateral for many of the stablecoin loans. Many of the borrowers, in turn, couldn’t repay these loans because they had used the stablecoins to purchase other investments that had themselves dropped in value. The interconnections among all of these transactions amounted to a ‘death spiral’ that dragged down Luna and TerraUSD simultaneously and had negative effects on many investors’ portfolios,” he said.

Bill Starkov, an NFT and crypto entrepreneur and founder of Apocalyptic Apes, LLC, who is known online as Fity.eth, said Luna’s demise was inevitable.

“If you looked at Luna and you watched it and you understood what it does, it was very inflated. It was very high,” he told ABC News.

Layoffs, bankruptcies plagued some of the most successful crypto companies

This past year saw the downfall of FTX, one of the largest cryptocurrency exchange platforms.

But FTX was not the only crypto company to crumble in 2022. BlockFi, a cryptocurrency lender, filed for Chapter 11 bankruptcy protection in November.

Kraken, another previously high-valued cryptocurrency exchange and bank, recently announced it was reducing its workforce by 30% to “adapt to current market conditions.”

Cryptocurrency has always been a risky investment, according to economist and stockbroker Peter Schiff.

“I don’t think they have any underlying value,” Schiff, who also hosts The Peter Schiff Show Podcast, said about digital currency.

“There’s no real wealth that’s being created out of crypto,” he said. “Money is just transferring from the people who buy it to the people who sell it. And it’s not even a zero-sum game. It’s a negative game, because there’s so much cost, you know, that’s involved in the process. But it’s unfortunate that so much capital has been wasted and so many companies have been formed around crypto and blockchain. It’s all a complete waste.”

According to Yermack, one shouldn’t confuse crypto for what happened to FTX.

“FTX is an offshore operation run by very inexperienced people who seem to have behaved very badly,” he explained. “The fact that they were trading crypto is a little bit beside the point. They could have been trading real estate or stocks and bonds, or whatever. They had no accounting, no internal controls, they were very irresponsible with the money that was entrusted to them by their customers. But that’s not to say that everyone behaves that way in the crypto universe.”

Starkov said FTX’s crisis is “unfortunate because a lot of people got hurt.” But despite a tumultuous year for cryptocurrency, he says people have made money with crypto and that will keep attracting investors.

Volatility and uncertainty, he said, is not endemic to cryptocurrency.